The record-breaking drought in Europe has shrunk countless bodies of water around the continent, and now a reservoir in Spain, at less than half capacity, has fully revealed a Roman fort that has been at least partially submerged for 73 years.

An ancient Roman military camp in what is now northwestern Spain was revealed in its entirety as reservoirs in Europe continue to shrink during August amid a record-breaking drought.

Portions of columns, arches and the foundation are all that remain of Aquis Querquennis, a fort and military barracks for Roman legions that were likely stationed there to monitor the construction of roads.

The fort was constructed along the Lima River in what is now known as Galicia, an autonomous region in northwestern Spain, and its occupation lasted from around 75 A.D. until it was abandoned less than a century later, according to a 2018 study. Locally, the site is known as A cidá, or "the city," though it is often submerged beneath the As Conchas Reservoir following its construction in 1949.

Over years past, portions of pillars and archways would break the surface as water levels dropped. Then in August 2022, as the reservoir's water levels receded to just 49% of the maximum level, the lake yielded the entirety of the camp. 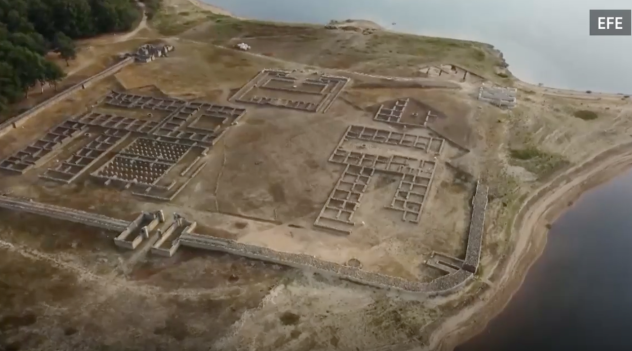 An aerial photo of Aquis Querquennis, a Roman military camp that dates back to the first century. (EFE)

This is not the first ancient relic to be unveiled this summer. Shrinking rivers and lakes across Europe have revealed a number of lost relics, from a World War II-era barge unearthed in Italy's Po River to "Hunger Stones" in the Elbe River, the last readable inscriptions dating back to the 15th century.

Now in Ourense, Galicia, aerial photographs show the bare bones of the sunken city, the remaining foundation outlining what past researchers have identified as granaries, a basilica and temple, an infirmary and three barracks that were capable of holding two centuria with their respective commanders. It took a historically severe drought to reach this point, however.

The ongoing drought in Europe is expected to be one of the worst in 500 years, scientists at the European Drought Observatory said in early August.

In Madrid, over 250 miles from the site, rainfall from May through Aug. 28 was only 7% of average, and for the same time period, the temperature was 8.4 degrees Fahrenheit above average according to AccuWeather Senior Meteorologist John Gresiak.

Spain, Portugal, France and the United Kingdom all saw temperatures measure over 40 degrees Celsius (104 F), and the Iberian Peninsula saw multiple days with maximum temperatures above 35 C (95 F) as a long-lasting heat wave baked the region.

July 2022 was the hottest month ever recorded for Spain, according to the Spanish National Meteorological Service (AEMET), and was one of the three warmest Julys on record, globally.

Mississippi woman makes shocking discovery while getting the mail