Meteorologists are monitoring a developing system over the Caribbean that could become the first named storm of the season taking aim at Florida at the end of the week.

Landfall of the first tropical system of the 2022 Atlantic hurricane season is imminent, AccuWeather meteorologists say. Despite the system not yet garnering a name, it was unleashing significant impacts in South Florida as of Saturday morning, including life-threatening flooding in Miami.

Swaths of intense, flooding downpours were sliding through South Florida early Saturday, bringing widespread street flooding from the Florida Keys to north of West Palm Beach. At Miami International Airport, roughly 7 inches of rain has been reported as of 5 a.m. Saturday, and radar estimates suggested close to 10 inches of rain elsewhere in the area. While the tropical disturbance has yet to be named, and will likely not officially become a tropical storm prior to moving over Florida, flooding rain and gusty winds will continue nonetheless.

Even though maximum sustained winds are just above the official tropical storm criteria, Hurricane hunter aircraft continued to investigate the storm and have yet to find a closed circulation near the center of low pressure. 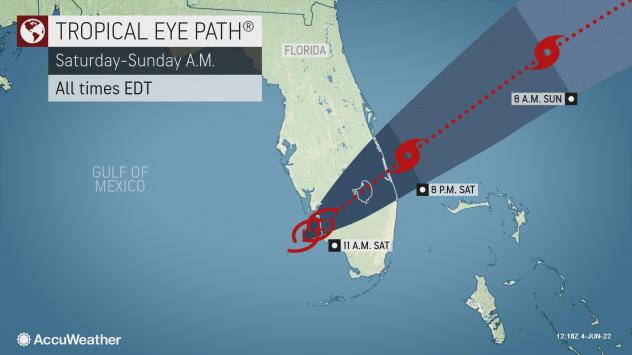 The tropical rainstorm, which AccuWeather meteorologists have been tracking all week, was dubbed Invest 91L on Wednesday by the NHC and then designated a Potential Tropical Cyclone late Thursday afternoon.

The system continued showing signs of development Thursday and Friday in a zone of tropical moisture over the northwestern Caribbean, near the eastern shoreline of Mexico's Yucatan Peninsula. Some of the moisture is leftover from the former Hurricane Agatha, which struck southwestern Mexico on Monday. A similar setup occurred in 2020 when Tropical Storm Amanda moved inland over Guatemala and diminished but help to spawn Tropical Storm Cristobal that later hit the central Gulf Coast of the United States. 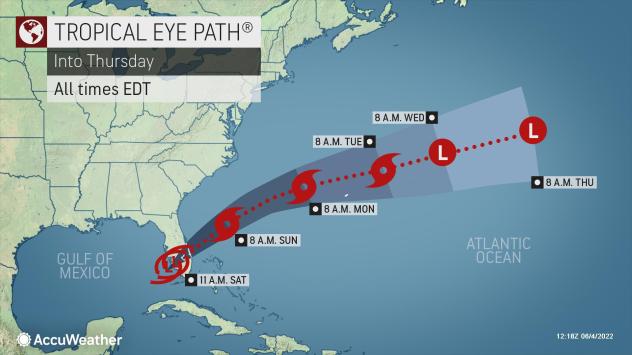 Wind shear has affected how quickly the system strengthens as it moves northeastward, according to AccuWeather Chief On-Air Meteorologist Bernie Rayno. These stiff winds have been strong enough to keep it from strengthening and organizing into a tropical storm thus far.

Wind shear has remained strong enough to cause much of the shield of rain and gusty winds to be skewed to the eastern side of the storm. Heavy rain will continue to pour down and even increase in intensity until the center has passed. At that time the bulk of the rain may be over. 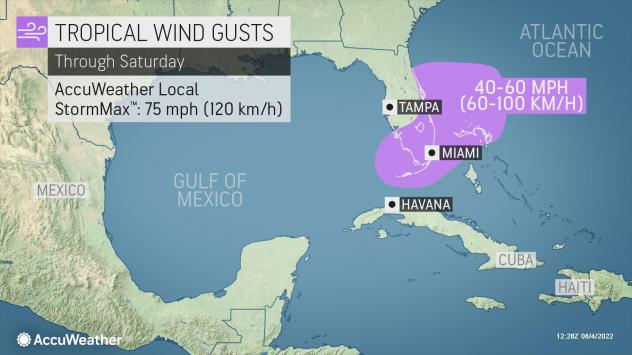 Winds may also be gusty enough to cause issues, especially in areas where the heaviest rain falls. With a saturated ground, it will take less wind to cause isolated power outages in South Florida. As of early Saturday, over 7,000 customers were without power in the state. Winds had also gusted over 40 mph in many areas. 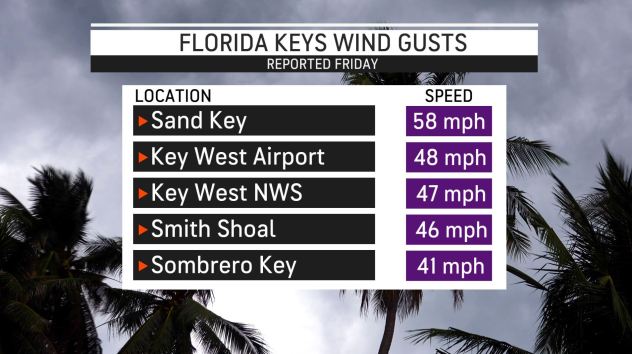 The rain will be beneficial in some South Florida communities due to abnormally dry to drought conditions that have unfolded this spring. However, too much rain will fall in many locations and is likely to cause flooding in urban and low-lying areas. Some roads may close due to high water. Forecasters say motorists and pedestrians should be prepared to take alternative routes in locations that are prone to flooding during times of heavy rain.

Much of the zone from the Keys to the Everglades and the Miami area is likely to receive a general 8-12 inches of rain with an AccuWeather Local StormMax™ of 20 inches. Much of that rain may fall in 24 hours and is more than enough to trigger street and highway flooding. 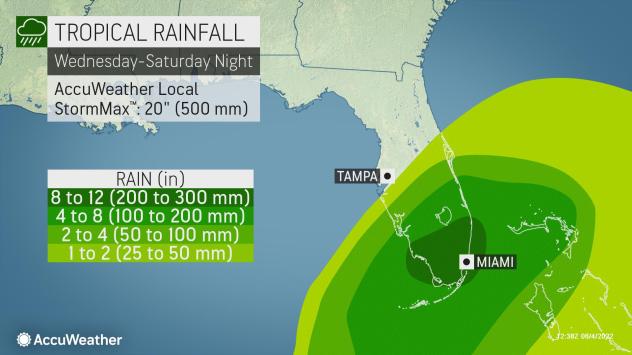 AccuWeather meteorologists have given this storm a rating of less than 1 for the U.S., Cuba and the Bahamas according to the AccuWeather RealImpact™ Scale for hurricanes. The main threat to lives and property is likely to stem from heavy rainfall.

Rainfall amounts of 4-8 inches (100-200 mm) are anticipated across western Cuba, which can trigger flash flooding and mudslides over the hilly terrain into the end of the week. The storm is forecast to bring similar rainfall with gusty thunderstorms over portions of the northwestern Bahamas from later Friday night to Saturday night. 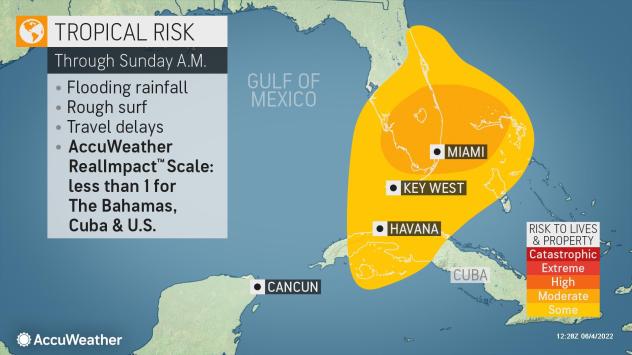 As the storm strengthens while crossing Florida and the adjacent waters, locally severe thunderstorms will bring the risk of a few tornadoes and waterspouts.

As the storm swings northeastward over the Atlantic later this weekend and into the first part of next week, there is potential for strengthening to a strong tropical storm. 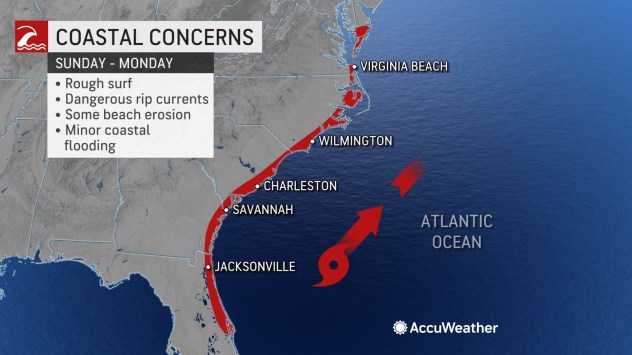 Rough surf, strong rip currents and minor beach erosion are likely to expand northward, even though the center of the storm may stay a couple of hundred miles or more at sea. Many of the East Coast beaches were hit hard earlier this spring by a slow-moving non-tropical storm.

"As the tropical system moves northeastward over the Atlantic, it could pass close enough to Bermuda to bring beneficial rain to the islands," AccuWeather Senior On-Air Meteorologist Mark Mancuso said. The island nation captures and recycles rainwater since there are no natural reservoirs or springs. Strict building codes enable the island to withstand a strong tropical storm or Category 1 hurricane with minimal impact and damage.

Since much of the rain may precede the center of the storm as it moves across Florida, the weather may improve significantly Saturday afternoon in southwestern Florida and much of the central and southern counties of the state should be mainly dry, sunny and warm on Sunday. High temperatures in low to mid-80s are likely in the rain zone on Saturday, but in the sunshine on Sunday, widespread highs in the upper 80s to mid-90s are likely.