Heavy rain could lead to flash flooding in the southwest

With heavy rainfall expected in the region, extreme meteorologist Reed Timmer speaks on the looming threat of flash flooding in Arizona.

A new tropical depression could form as soon as Saturday in the southwestern Gulf of Mexico, AccuWeather forecasters say.

Satellite imagery indicated that a broad area of showers and thunderstorms associated with low pressure that was located over the southwestern Gulf and the Bay of Campeche was becoming better organized.

The National Hurricane Center (NHC) said on Friday afternoon that it dubbed the tropical disturbance in the Gulf of Mexico Potential Tropical Cyclone Four and would be issuing advisories on the system. The latest advisory at 4 p.m. CDT Saturday noted that the disturbance is moving northwest at approximately 14 mph, with maximum sustained winds near 35 mph.

The Mouth of the Rio Grande to Port Mansfield will be at risk for a combination of storm surge and rising tides, potentially causing normally dry areas near the coast to be flooded by waters moving inland. The NHC stated that waters can reach up to one foot above ground during peak surge times.

Meteorologists have been scrutinizing this part of the Atlantic basin for days and said there was a tight window of time for the system to form. However, it appears as if the system will spend enough time over warm waters that it could gain strength and become organized fairly quickly.

This budding system has been designated as a tropical rainstorm by AccuWeather forecasters. As of Friday, it has been given a moderate chance to develop into a tropical depression or storm. 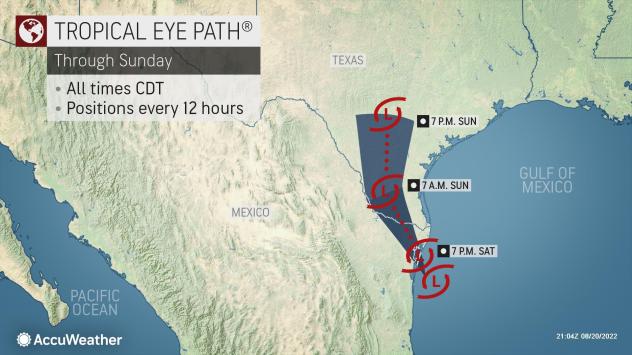 A similar forecast is expected for the coming days, though this disturbance stands a greater chance at becoming the season's fourth named storm.

"This tropical rainstorm is moving over an area of high sea-surface temperatures which can allow a brief window for the system to strengthen into a tropical depression or tropical storm," said AccuWeather Meteorologist Mary Gilbert.

Whether it becomes a tropical storm or not, the rainstorm will drench portions of northeastern Mexico and southern Texas with heavy rain. This tropical rainstorm has been rated a less than one on the AccuWeather RealImpact™ Scale for Hurricanes for the U.S. and Mexico due to the risk of flooding rainfall. 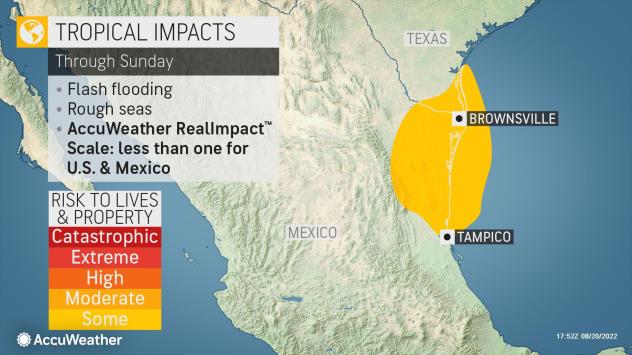 “Heavy rainfall is expected to occur across portions of eastern and northeastern Mexico as well as southern Texas as a tropical rainstorm approaches from the western Gulf of Mexico," Gilbert said. "A general 1-2 inches (25-50 mm) of rain will fall across the area with higher amounts of 2-4 inches (50-100 mm) along the immediate coast of eastern Mexico and higher terrain south of Monterrey. This can lead to local flash flooding in the spots with the heaviest rainfall.” 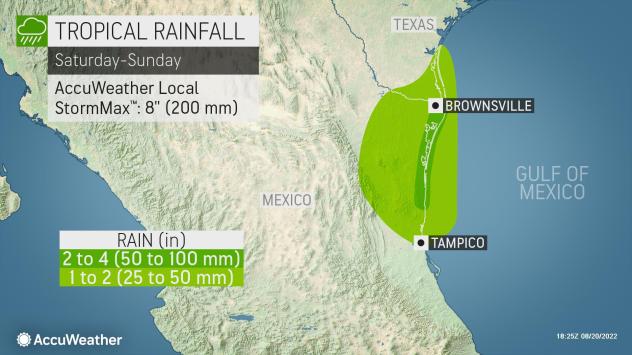 While rain is likely to be heavy enough to cause flooding issues in some areas, it is unlikely to be as heavy as that of the rainstorm earlier this week, which dumped over 8 inches of rain on portions of South Texas.

"While this system will have very warm waters to help it organize, there are some factors working against it as well. The storm will only have a short window of time over water, and some dry air may put a cap on the amount of rainfall that we see from this storm," AccuWeather Meteorologist Andrew Johnson-Levine explained. 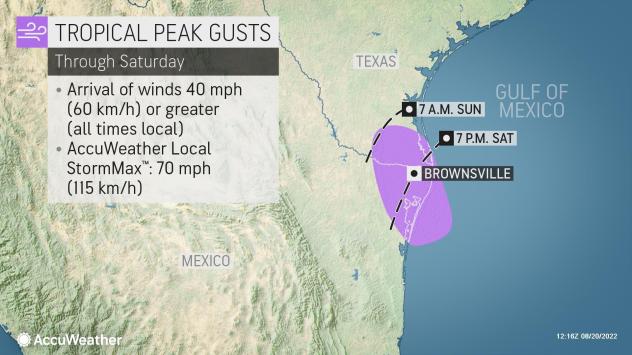 In addition to the rainfall, gusty winds may become an issue for some, especially just to the north and east of the storm's center. While winds are unlikely to be strong enough to cause power outages and meaningful damage, the combination of rain and wind is likely to create rough seas, disrupt outdoor activities, and cause travel slowdowns.

The Atlantic basin has been a bit behind schedule this year in terms of producing named storms. The last named storm to develop was Tropical Storm Colin which formed early on Saturday, July 2, off the coast of South Carolina. Since Colin dissipated the next day over North Carolina, no other named storms have taken shape.

Typically, the fourth named storm during a hurricane season develops by Aug. 15 in the Atlantic. The next name on the list utilized to name storms by the NHC is Danielle.

On Thursday, AccuWeather meteorologists issued an update to their 2022 Atlantic hurricane season forecast, which was released back in the spring. After initially calling for 16-20 named storms, AccuWeather's team of long-range forecasters is now predicting a total of 16, which includes the three storms that already formed.

However, AccuWeather forecasters still expect a very active hurricane season with more than three months to go until the official end date of Nov. 30.

"Our thinking has not changed as far as 2022 still being an active season," AccuWeather Hurricane Expert Kottlowski said. "Our biggest concern is for a high chance for high-impact hurricanes."