More tropical development likely in the Atlantic this week following formations of Peter, Rose. Get the latest.

South Korea, Japan next in line to feel impacts from Chanthu

After unleashing damaging impacts across portions of the Philippines last week and Taiwan this weekend, Tropical Storm Chanthu continues to unload heavy rainfall across parts of mainland China. AccuWeather forecasters say after the storm departs China, parts of South Korea and Japan will be next to feel the wrath of Chanthu.

Chanthu exploded to life in the basin last week and underwent rapid intensification to become only the second super typhoon of the season, according to the Joint Typhoon Warning Center (JTWC). While Chanthu no longer carries the designation of super typhoon following its interactions with Taiwan and China, forecasters say this storm still packs a serious punch.

As of Tuesday evening, local time, the eye of Tropical Storm Chanthu was located in the East China Sea. Chanthu was moving slowly to the southeast, according to the Japan Meteorological Agency (JMA). Chanthu’s 10-minute average sustained winds were 52 mph (83 km/h), meaning it was the equivalent of a tropical storm in the Atlantic and East Pacific basins.

"Chanthu will lose wind intensity as it continues to push northward [and stalls] near or just east of Shanghai into Wednesday," AccuWeather Senior Meteorologist Jason Nicholls said. 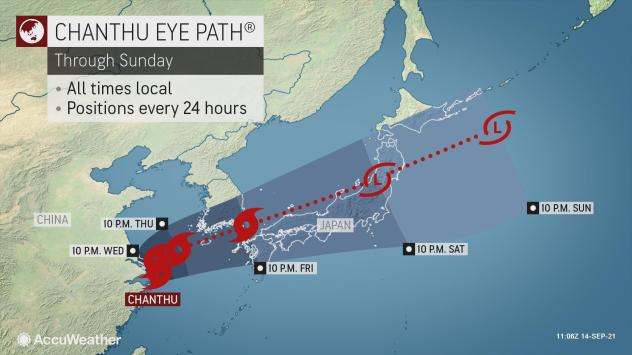 AccuWeather forecasters say the most significant impact to mainland China from Chanthu will be heavy rainfall.

"Heavy rain and flooding will be a concern across Jiangsu and Zhejiang provinces into Thursday," Nicholls cautioned. 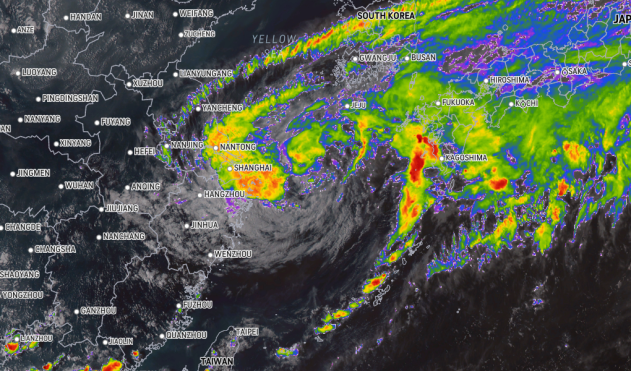 With likely still a full day of rain to go, Dinghai, China, located right along the coast, has already received 24 inches (609 mm) of rainfall. This amount came in just over 48 hours.

Shanghai, home to over 26 million people, is forecast to receive widespread rainfall amounts of 4-8 inches (100-200 mm) from Chanthu from Monday through Thursday. However, AccuWeather forecasters caution that should a band of torrential rain make it into the area, rainfall totals could exceed these amounts, perhaps greatly. 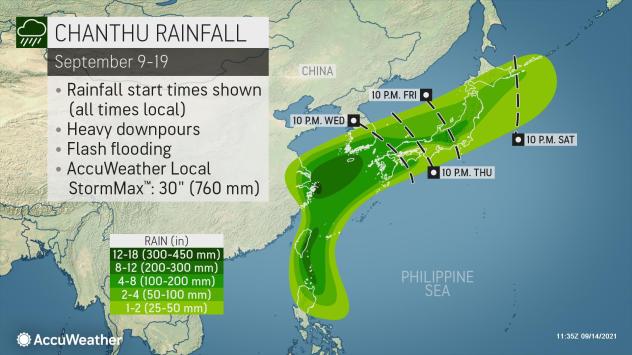 Rainfall of this magnitude can cause significant issues for China's biggest city, which also happens to be one of the world's busiest shipping hubs. Any delays in operations as a result of the storm may hurt not only the Chinese economy, but may be felt for a time by the global economy as a whole.

Over 300,000 people in Shaghai were evacuated due to Chanthu, according to People's Daily, China, a state-affiliated media station.

Even before the storm approached the Jiangsu and Zhejiang provinces, Chanthu, already led to disruptions for travel and recreation. All flights after Monday morning, local time, were cancelled at Shanghai Pudong International Airport and Hanghzou Xiaoshan International Airport due to Chanthu. Parts of China raised typhoon emergency warning to Level 1, while ports in Zheijiang, China, suspended empty container loading and unloading due to Chanthu.

In addition, Shanghai Disneyland announced the closure of the popular theme park for both Monday and Tuesday due to Chanthu. 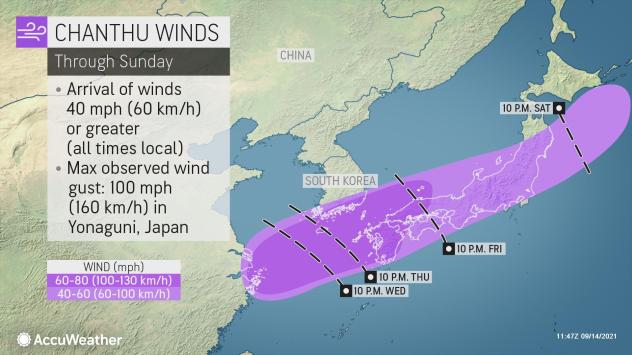 Wind gusts of 40-60 mph (60-100 km/h) can occur for areas potentially up to 50 miles (80 km) inland as Chanthu stalls off the Chinese coast, according to AccuWeather Meteorologist Alyssa Smithmyer.

Chanthu was not the first typhoon of the season expected to bring impacts to this portion of China.

"Typhoon In-fa impacted Shanghai in late July of this year and had a similar slow-moving nature as what is forecast for Chanthu," Smithmyer noted.

However, the comparison between the two storms stops at their slow-moving nature, according to Smithmyer.

"The track of Chanthu, however, has a different path orientation than what Typhoon In-fa took," Smithmyer explained.

In-Fa made landfall near Zhoushan City, China, and pushed inland through China for several days.

Chanthu is likely to slow and stall just off the Chinese coast through midweek before picking back up forward speed and taking on an eastward track. With this eastward track, the long-lived system will take aim additional portions of Asia by week's end.

The long-lived nature of Chanthu in the Shanghai area could further compound the impacts it brings to the region. 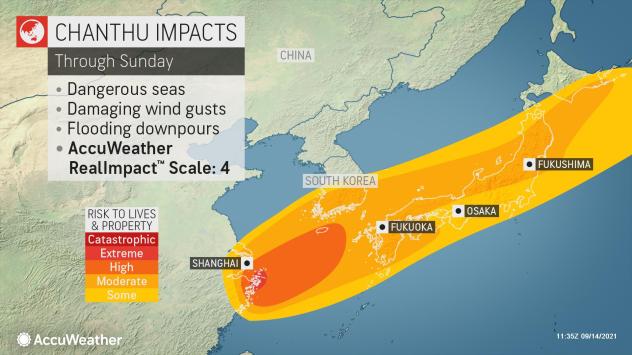 "Because Chanthu is expected to move very slowly, or even stall, very heavy rain and gusty, potentially damaging winds could persist over the same areas for days," AccuWeather Meteorologist Jake Sojda warned.

Beyond just eastern China, portions of South Korea and Japan will ultimately end up in the path of Chanthu.

As Chanthu tracks eastward from midweek through the weekend, widespread wind gusts of 40-60 mph (60-100 km/h) will be common across the southern portion of South Korea, as well as parts of the Japanese islands of Kyushu, Shikoku and Honshu. Higher wind gusts can occur across South Korea's Jeju Island and Japan's Kyushu island.

"The wind threat should ease late in the week, but the flooding risk will remain high," Nicholls cautioned.

Low-lying and poor drainage areas will be most susceptible to flooding at the onset of Chanthu's rainfall, but as more rain continues to fall, area waterways will begin to swell. In addition, any higher-elevation areas in the path of Chanthu's heaviest rainfall will be at risk for mudslides due to oversaturated soil.

After moving across portions of Japan later this week, AccuWeather forecasters say Chanthu is set to push into the North Pacific Ocean early next week. It is there that the system will enter more hostile conditions for development and will likely dissipate.

Severe storms to jolt areas from Minnesota to Oklahoma