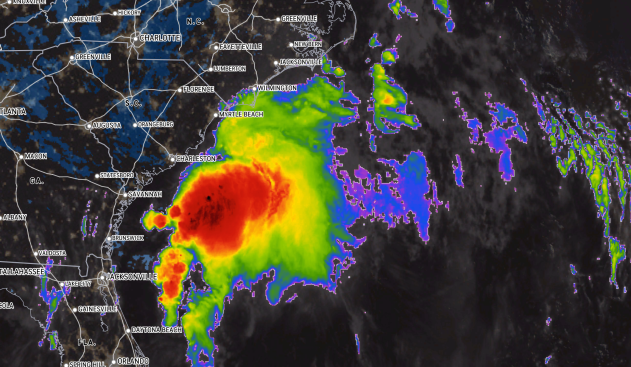 A satellite image showing Tropical Storm Colin not long after it formed early on Saturday, July 2, 2022.

The National Hurricane Center issued tropical storm warnings for parts of the South Carolina and North Carolina coastlines during the early-morning hours on Saturday after a rapidly-developing low-pressure system along the Southeast coast of the United States strengthened into Tropical Storm Colin, the third named storm of the Atlantic hurricane season.

As of approximately 11 p.m. EDT Saturday, Colin had lost wind intensity below the 39-mph benchmark to qualify a system as a tropical storm, and had been downgraded to a tropical depression. At the 5 a.m. EDT Sunday update from the National Hurricane Center, Colin continued its weakening trend, losing its tropical depression designation. Continued rainfall in the form of scattered showers and thunderstorms still loom for North Carolina Sunday morning, however, and rough surf conditions are expected in the state for the remainder of Sunday.

Through Saturday and Saturday night, Colin had produced one to three inches of rainfall across the eastern Carolinas, leading to a raw and nasty day at area beaches.

AccuWeather forecasters expect the remaining energy from Colin to continue to spark shower and thunderstorm activity through the remainder of the Fourth of July weekend, primarily for the coastal Plain and Outer Banks of North Carolina as the storm crawls northeastward. 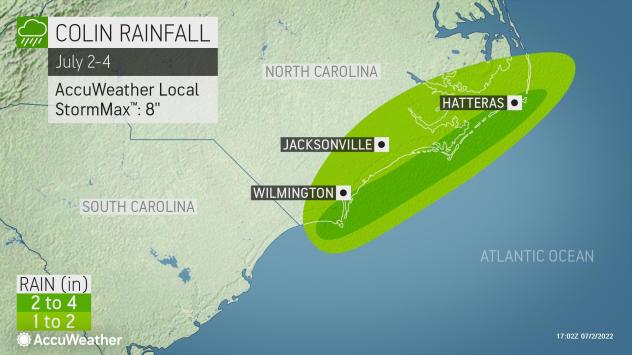 Many coastal areas can expect a general 2 to 4 inches of rain from Saturday to Monday, according to AccuWeather forecasters, with an AccuWeather Local StormMax™ of 8 inches. Points just inland of the coast are more likely to pick up precipitation totals in the 1- to 2-inch range.

"The strongest wind associated with Colin is expected to remain offshore, though isolated wind gusts of 40-50 mph with an AccuWeather Local StormMax™ of 60 mph can be experienced along portions of the Carolina coast, especially on Cape Fear, Cape Lookout and into the southern Outer Banks," Douty said.

As a result of the limited impacts expected with Colin, the storm has been rated a less than one on the AccuWeather RealImpact™ Scale for Hurricanes.

The emergence of Colin will no doubt put a damper on holiday plans along a stretch of shoreline that is a popular beach vacation destination. Many tourist spots are in areas where tropical downpours continue to fall in both South Carolina and North Carolina, though conditions in South Carolina could begin improving just in time for Independence Day itself.

"There will be rough surf, dangerous rip currents and areas of coastal erosion in the vicinity of the storm through the end of the weekend," Douty said.

Parts of North Carolina's famous Outer Banks were also covered by tropical storm warnings on Saturday -- a place that's not only popular with vacationers but that has also been grappling with the effects of coastal erosion caused by all types of storms and the creeping impacts of climate change.

On Saturday evening, all Tropical Storm Warnings had been discontinued as Colin continued to lose wind intensity.

In May of this year, at least two homes in Rodanthe, which sits along a particularly narrow and threatened strip of the Outer Banks, crumbled into the Atlantic Ocean, leaving locals there on edge. A few months earlier, another beachfront home was claimed by the Atlantic Ocean during a storm. 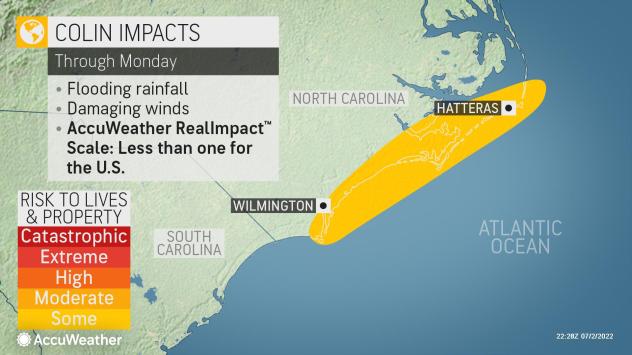 Local officials have been aware of the threat posed by coastal erosion and the encroaching Atlantic and have been taking certain measures in recent years to preserve cherished parts of the waterfront. Danny Couch, a local commissioner in Dare County, North Carolina, which comprises most of the Outer Banks communities, told AccuWeather earlier this year that it seems as though “the storms are getting a little more ferocious" and acknowledged that locals are "going to have to adapt" to a new normal.

By mid-afternoon on Sunday, AccuWeather forecasters expect the tropical rainstorm to take a right turn and begin heading out to sea where it will further lose wind intensity as it heads over open waters.