One vacationer found herself on a much longer trip than planned while another homeowner is assessing if her property is still safe.

One resident says the ocean has never been this close to her home.

Residents along parts of North Carolina's Outer Banks are living on edge as the frenzied ocean pushes ever closer to people’s homes following a potent coastal storm that wreaked havoc much of this week.

At least two houses were swallowed up by the ocean near the coastal town of Rodanthe, North Carolina, which sits along a particularly narrow and threatened strip of the Outer Banks. As the storm worsened earlier this week, water and sand overtook North Carolina Highway 12, the roadway which connects Rodanthe to the upper Outer Banks.

Kim Dacyczyn and her family got stuck on vacation in Rodanthe after the highway was temporarily shut down.

"We were literally in the car, and all these alerts started going off saying our flights were canceled, and so we went to go to how to rebook our flights, and while we were working through, all our phones started blowing up that the road was closed," Dacyczyn told AccuWeather.

A house in Rodanthe, North Carolina, collapses into the Atlantic Ocean.

Their vacation property was just a few blocks away from where both homes fell into the ocean, but they felt relatively safe because large dunes were still maintained in front of their property. That wasn't the case for Cynthia Doughty, who evacuated her coastal home as the storm continued to rage.

Doughty's driveway slab cracked during the storm, and 4-5 feet of sand washed up on her property as water crashed against the stilts and her first floor.

"I had gotten a call that the debris from the fallen house had broken in my back door and that water was coming in from the first floor, so we didn't even attempt; we just jumped in a hotel," Doughty, who added that this is the closest the water has ever gotten to her house, told AccuWeather. 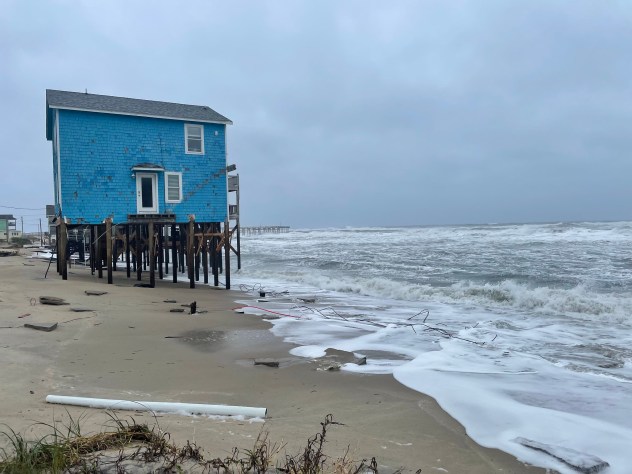 Some houses in Rodanthe are perilously close to the ocean's edge.

Inside their house, the first floor shows signs of water damage, with sand making their floor look more like the beach than a nice summer getaway.

In the event storms like this become more common or that erosion in the area continues to worsen, Doughty does have enough space on her lot to move her house backward. Meanwhile, Dacyczyn is also thinking about her potential future plans on the Outer Banks.

After her and her family's difficult trip to Rodanthe, Dacyczyn said she is still willing to come back, but she will prepare harder in case of a coastal storm.