Smoke from the Bobcat Fire raging in Azusa, California, settled in over Los Angeles on Sept. 14, turning the sky smoky.

As the wildfires in the western United States encroach upon neighboring states, the smoke has invaded airspace stretching into the eastern half of the country. Meanwhile, Hurricane Sally recently weakened near the Louisiana coastline from a Category 2 storm to a Category 1, but forecasters say the exact strength won't likely change the battering it is starting to unleash along the Gulf Coast.

The satellite imagery of the U.S. shows how the dense smoke from the wildfires spawned in the West has fanned out and drifted into the Eastern skies of the country. To the south of the smoke is Hurricane Sally, which had been downgraded from a Category 2 hurricane to a Category 1 before the time of the image. Farther to the east, the smoke has extended into the Atlantic and overlapped with Hurricane Paulette. At the time of the image, the Category 2 hurricane was continuing to strengthen. 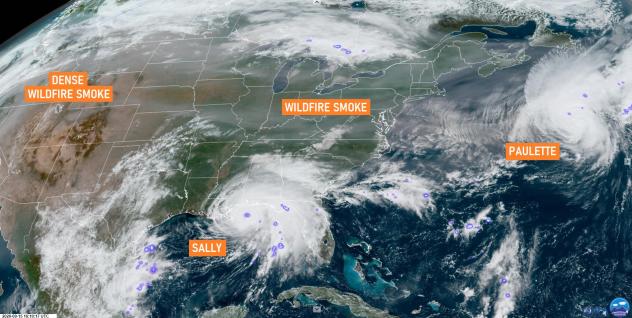 Satellite imagery of wildfire smoke from the western U.S. that has traveled to the eastern part of the country. Meanwhile, a weakened Hurricane Sally churned in the Gulf on Sept. 15, 2020, as Paulette strengthened out in the Atlantic. (CIRA/RAMMBA/GOES-East/edit by Adam Del Rosso)

The western U.S.'s wildfire season has had an intense impact across at least the 10 states currently fighting to contain the blazes. Collectively, over 4.6 million acres of land -- a portion of the U.S. amounting to the size of Connecticut -- are currently burning. The wildfires have scorched over 6 million acres total, a little over the size of New Hampshire, since Jan. 1, 2020, to date, according to the National Interagency Fire Center (NIFC).

A total of 87 large fires, not including individual fires within complexes, are burning across the 10 states, according to the agency. The USDA Forest Service defines a "large fire" as a fire burning more than a specified area of land, which may differ between states, but also as "a fire burning with a size and intensity that its behavior is determined by interaction between its own convection column and weather conditions above the surface."

For comparison of the intensity of wildfires from 2020 compared to the previous year, California has seen at least 3.3 million acres scorched to date this year where it only saw 0.3 million burned throughout the course of 2019. For the 10 states currently fighting wildfires, only 1.6 million acres had been burned during 2019. From Jan. 1, 2020, to date, the same states have seen a collective 6.5 million acres burned, according to data from the NIFC and compiled state-level fire reporting sources. 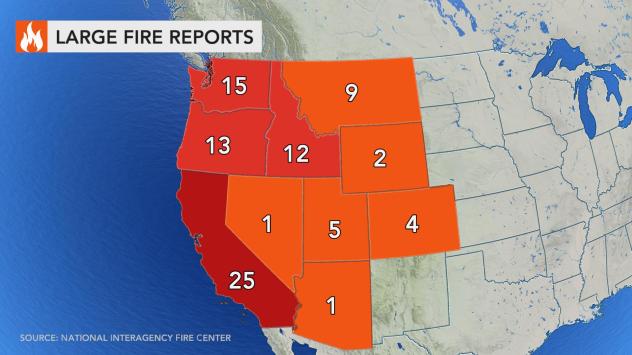 The smoke from these destructive fires has drifted as far east as parts of Pennsylvania and even dipped down toward more Southern states like North Carolina and Tennessee -- and even extending out to sea over Paulette.

The smoke has been impacting air quality reports across the nation, and has even caused some drop in temperatures. Knowing hurricanes thrive off of heat and moisture, is it possible for smoke to impact tropical development should the haze drift to the Gulf?

The afternoon sun sank in the hazy sky of Altoona, Pennsylvania, on Sept. 13, 2020, veiled by smoke from active wildfires at the other side of the country. (Brian Lada)

Hurricanes thrive off of heat and moisture, and there are a multitude of factors that can hinder a storm's development. As far as smoke affecting the weather, it can dim and block out enough sun to hold the heat of the day at bay, according to AccuWeather Senior Meteorologist Alex Sosnowski.

"If the smoke layer is thick enough, especially aloft, like it is in the East, it can hold high temperatures back by several degrees," Sosnowski said. "Smoke can also insulate a bit at night... act like a blanket and keep temperatures from bottoming out so much by a few degrees."

But hurricanes are fueled by the heat and moisture of the sea surface -- and bodies of water tend to take much longer to adjust to fluxes in temperature. This is one of the reasons why hurricane season peaks in September and into October, after the blistering, peak summer heat pre-heats the ocean.

Due to drawing power from the ocean, the storms typically reside in the lowest part of the atmosphere. The smoke from the wildfires above the Central and Eastern states linger around 20,000 to 40,000 feet. In the Gulf, the highest-reaching storm clouds might extend to 30,000 to 50,000 feet above the sea's surface. The "prime energy zone" the hurricane feeds off of, as Sosnowski refers to it as, is from the sea level to about 15,000 to 20,000 feet, roughly. The energy driving the activity comes from the sea surface and this lower area of the atmosphere.

While particles in the atmosphere, such as the Saharan Dust that travels from Western Africa to the Gulf Coast each June into July, tend to suppress tropical development, the wildfire smoke won't have the same effect.

As Sally churns in the Gulf Coast and Paulette treks farther out to sea, smoke from the wildfires in the western U.S. can be seen invading the skies of the Eastern states. (NOAA/GOES-East)

"[Wildfire smoke] typically resides higher in the atmosphere and is probably not as thick," AccuWeather's top hurricane expert Dan Kottlowski said. "The only thing smoke does is reduce insolation -- the amount of solar radiation reaching the Earth's surface which can cause temperatures to be cooler than they otherwise would be."

"While the smoke could theoretically have some effect on Sally, it would likely be minimal with effects from the Gulf, land and wind shear far outweighing impact on the tropical system," Sosnowski said.

Wind shear, or the increase in winds with increasing altitude, is a common factor in the suppression of tropical systems. However, in the case of Sally, as Sosnowski points out, it didn't act alone.

With smoke out as a factor, we turn to the nature of the storm itself. Sally didn't weaken from any intervention from the wildfires, but more from self-sabotage.

"Sally weakened because of its own slow movement causing waters in the Gulf of Mexico to churn and bring up cool water from the depths," Sosnowski said. "In addition, Sally stalled near the coast so friction from the land was tugging on the storm's circulation."

Perhaps for the best, 2020's two record-breaking seasons will most likely not interact as they overlap.

Due to some of the clouds and upper vertical circulation of hurricanes, Sosnowski says there could be some mixing, but questionable as to what becomes of it -- though likely nothing major in terms of impacts.

"There is no direct impact that can be solidly proven that smoke enhances or takes away from hurricanes, I would say," Sosnowski said. "But ,since they are in two different parts of the atmosphere in this case, the effects would be minimal at best or perhaps not at all."