AccuWeather expert Dan Kottlowski, who has been predicting hurricanes for decades, explains the factors behind where storms brew early -- and where they typically track.

A massive plume of Saharan dust has emerged off of the African coast, nearly a month ahead of the average pace, and it could be seen in satellite images spreading westward across a large corridor of the Atlantic basin -- just about two weeks ahead of the beginning of the 2021 Atlantic hurricane season.

Due in part to the dust and dry air present across the tropics, along with other factors, the Atlantic basin will likely remain quiet in the coming days, and perhaps even leading up to the official start of hurricane season on June 1. But AccuWeather meteorologists warn that even though dust can suppress development across the vast Atlantic Ocean, storms can still form closer to the U.S. where the water is shallow and warmer. 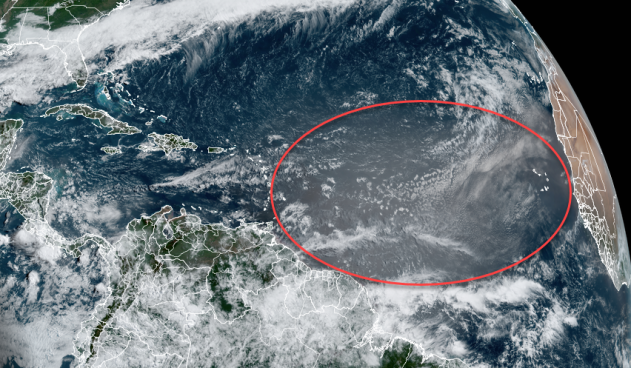 Satellite imagery of the dust plume from the Sahara trekking across the Atlantic toward the Lesser Antilles on Thursday, May 13, 2021. (NOAA/GOES-16)

Earlier this year, the National Hurricane Center (NHC) said it was coordinating with other federal weather agencies on considering whether to lengthen the duration of the Atlantic hurricane season by moving the start date up to May 15.

Tropical storms that develop before the official start of the Atlantic hurricane season and early in the season tend to form closer to the U.S. The relatively shallow water in the Gulf of Mexico and along the Southeast coast of the U.S. is able to heat up faster than deeper water located in the middle of the Atlantic Ocean.

Tropical systems can also form along frontal boundaries that stall above warm ocean water. An area of thunderstorms can become robust and be influenced by the warm ocean water resulting in storms that develop tropical characteristics.

But, typically waters aren't warm enough and conditions are not favorable for pre-season storms to strengthen to hurricane force, which requires sustained wind speeds of at least 74 mph.

There have only been four hurricanes on record in the Atlantic Basin that have been named in the month of May -- Hurricane One in 1889, Hurricane Two in 1908, Hurricane Able in 1951 and Hurricane Alma in 1970.

These off-season hurricanes mainly formed north of Puerto Rico and tracked up the Southeast coast of the U.S., intensifying into hurricanes along the way. Hurricane Alma in 1970, was the only May hurricane that developed in the Caribbean and marched north into the Gulf of Mexico, making landfall near Cedar Key, Florida.

Early season dust and dry air from Africa is one of the reasons tropical activity is often suppressed early in the tropical season. 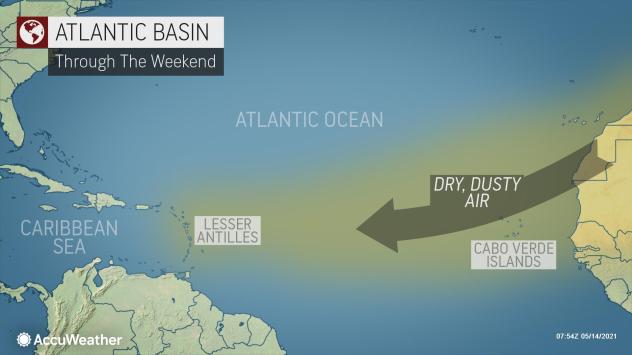 "We are going into a more active time for Saharan dust to be pushed into the Atlantic as the East African jet stream starts to become more developed and stronger," AccuWeather Senior Hurricane Expert Dan Kottlowski explained.

The cloud is part of what's known as the Saharan Air Layer (SAL), which usually occupies a 2- to- 2.5-mile-thick layer of the atmosphere, with a base starting about 1 mile above the surface, according to the National Oceanic and Atmospheric Administration (NOAA).

This dust cloud is not expected to be as monstrous as the Saharan dust event that impacted the Gulf Coast and into the central U.S. June of 2020.

For reference, that dust event that occurred in June 2020 was one of the most significant events in the past 50 years and it was even referred to as the "Godzilla dust cloud," according to The Associated Press.

The dust cloud that will impact areas as far west as the Lesser Antilles this week is not too out of the ordinary for this time of year, according to AccuWeather forecasters.

"NOAA estimates that the Saharan Dust season starts in mid-June, but both in 2020 and this year, we have observed several episodes of dust coming off the northern Africa coast in May," AccuWeather Senior Weather Editor and Meteorologist Jesse Ferrell explained. 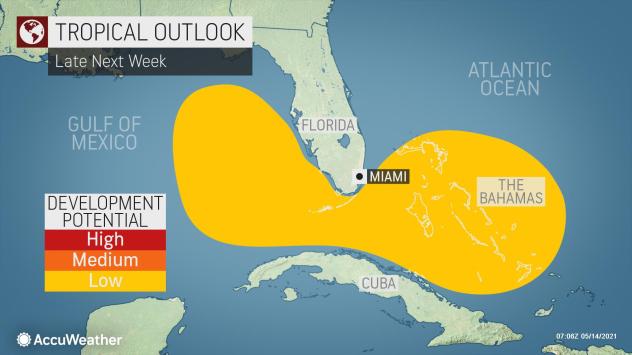 The dust is forecast to dissipate before it reaches the Caribbean and even portions the U.S. this week as the cloud of sand and other particles is set to encounter a stationary front that will be draped over Cuba into Puerto Rico. The presence of the front will help disperse the dust thanks to windy conditions and wet weather.

Despite the fact that dust may help to inhibit tropical development early on, AccuWeather meteorologists say that does not mean that will be the same trend when hurricane season typically becomes more active later on in the season. In fact, it could mean increased activity once hurricane season reaches its peak.

If there were any chance for development in the Atlantic in the short term, a storm would have a difficult time surviving in the current weather pattern. 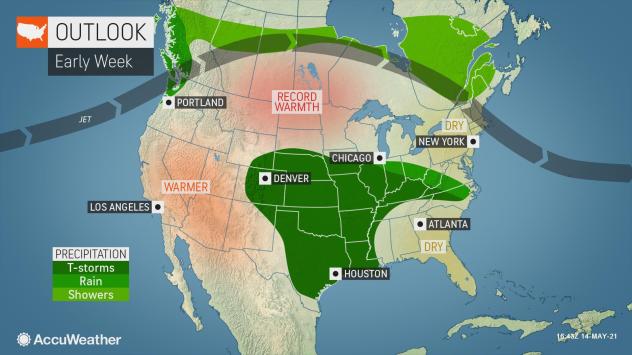 Cool fronts have been moving farther south than normal in the eastern U.S., and AccuWeather Lead Long-Range Meteorologist Paul Pastelok expects that pattern to continue. Even though that has typically set the stage for development just off the U.S. coast some years, other factors are not conducive for development this year.

Strong wind shear, or winds that change rapidly in direction or speed with altitude, will remain present over the Gulf of Mexico, and that can disrupt the ability for tropical storms to take shape. Additionally, "Sea-surface temperatures are cool near Southeast coast," Pastelok explained.

But, water temperatures are warm enough to support tropical development on the southwest coast of Florida and around western Cuba. The warm ocean temperatures, sitting around 80-85 degrees Fahrenheit, are around normal for mid-May.

"Anything that tries to form in the southwest Atlantic would have to head north or northeast to survive, and would probably fall apart heading toward the coast," Pastelok said.

And the first Atlantic basin storm to officially form in 2021 will be given the name Ana.

Forecasters recall the ‘phenomenal’ intensity of a storm that was overshadowed by Katrina
What was it like to ride out the storm? Hurricane Laura survivors who didn’t evacuate tell their stories
Everything you need to know about Saharan dust