Isaias' winds sent debris flying like missiles through the streets of New York City on Aug. 4. It narrowly missed this moving car with bystanders frightened.

Toppled trees and mass power outages plagued much of the Northeast on Wednesday after Tropical Storm Isaias tore inland a day earlier, spreading flooding rain, damaging winds and tornadoes along the Eastern Seaboard -- and killing at least nine in the U.S.

By Tuesday afternoon, at least six possible tornadoes had already spun up in Delaware and another in New Jersey, according to the National Weather Service's Storm Prediction Center (SPC). The tornadoes follow the destruction stirred up farther south, giving a preview of what Isaias still had to offer as a tropical storm. 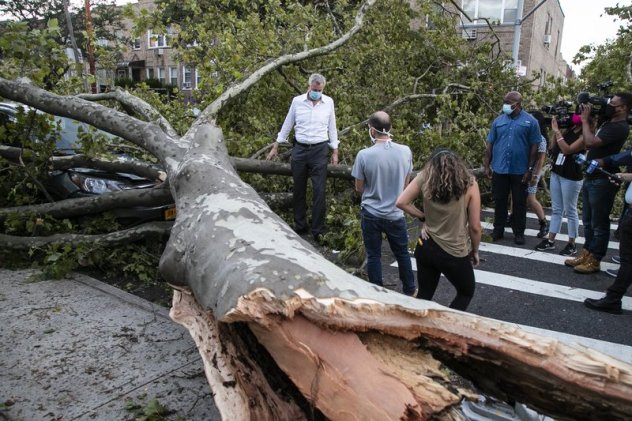 In the Queens borough of New York City, Mayor Bill de Blasio analyzed damage on Wednesday morning after strong winds downed numerous trees and caused widespread damage on Tuesday. According to The Associated Press, 60-year-old Mario Siles was killed in Queens after a large tree crushed the construction van that he was sitting in.

As officials work through the damage left behind, the death toll from Isaias continues to climb in the eastern U.S., as at least eight other fatalities have been reported from Isaias since its original impacts. Three total people were killed last week in the Bahamas and Puerto Rico from wind damages and flooding before another two were killed by a tornado in North Carolina on Tuesday. In Maryland, Delaware and Connecticut, three more were killed by wind damage from falling trees.

On Wednesday morning, another death was added, this time from New Hampshire. According to officials, a 60-year-old woman was killed in her home from a falling tree in North Conway, raising the total death toll to at least nine. Rescuers were able to save one other person from that house. 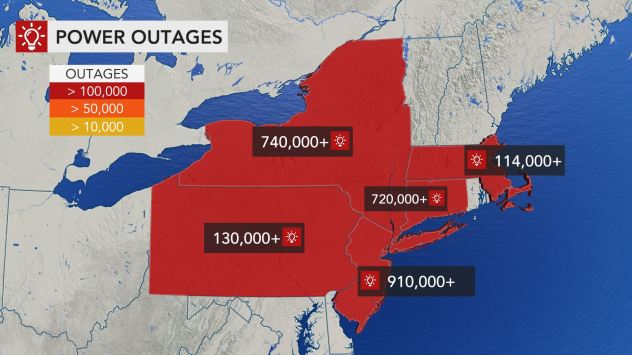 In Middletown, Delaware, resident Phil D'Elia was at work, a tornado hit his street, tearing into neighboring homes. One exterior wall of a house's second story was completely torn off, exposing the interior. His family, D'Elia told AccuWeather over Twitter, took shelter in their basement.

After the storm, debris littered the front yards. Trash cans had been tossed onto their sides, insulation shredded and scattered across rain soaked asphalt and possessions had been torn from homes, like an ice tray that sat in the street. Trees lay on the side of the street, snapped at their trunks from the tornado-warned storm that had slammed the area.

Tuesday afternoon, Bucks County in Pennsylvania reported high winds had struck Doylestown Hospital, partially tearing the roof off of the Children’s Village daycare center. There have been no reported serious injuries according to the county.

"While tornadoes that are associated with tropical systems are typically weaker than those produced by the strongest thunderstorms, they can occur rapidly with very little, if any, warning, making it almost impossible to seek shelter in some cases," AccuWeather Senior Meteorologist Randy Adkins said.

As Isaias continues its trek up the Northeast and into Canada, so did its reach. The center of Isaias tracked into Canada Tuesday night where it officially lost its pure tropical characteristics. The remaining rain and wind field associated with the storm was racing north-northeastward at 40 mph.

The SPC issued an enhanced risk of severe weather Tuesday morning for part of the Interstate 95 corridor. New York City and surrounding areas were under a tornado watch at one point in the day, but that watch has been discontinued.

The George Washington Bridge, connecting Manhattan, New York, with Fort Lee, New Jersey, imposed a speed restriction of 35 mph in both directions across the bridge due to "adverse weather and high winds."

New York Gov. Andrew Cuomo tweeted Tuesday that residents should heed warnings and stay alert, saying "I urge New Yorkers to look out for local weather alerts, exercise caution and avoid unnecessary travel, especially if you are in the storm's direct path." 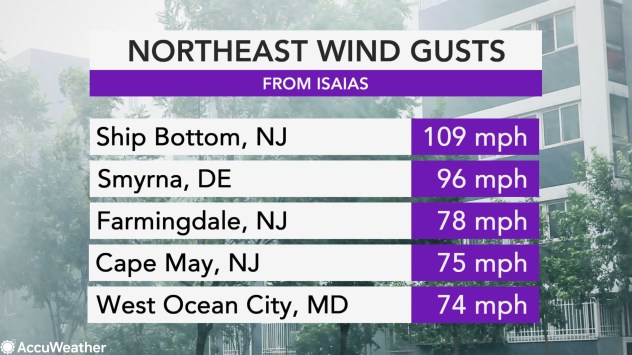 Dover Mayor Robin Christiansen issued a state of emergency for the city, which included driving restrictions, the Dover Police Department reported. "We are asking you to stay in your homes and avoid unnecessary travel," the department tweeted, adding for residents to keep the streets clear of parked cars where trees are down to aid cleanup crews.

"[A] Tornado touched down behind our hotel in Dover, Delaware. Trees shredded. Several cars under branches. I felt the whole building shudder," Twitter user Max Ollendorff posted on the social media outlet.

"I was actually in the bathroom area towards the rear of our room and the whole place shuddered," Ollendorff, 59, told AccuWeather over Zoom.

A small business owner who works at trade show exhibits and corporate events, Ollendorff's business had been closed since March 5, "in shutdown mode," he said. He had traveled from Southern California to Dover with his daughter for a soccer ID camp, though Tuesday's events were canceled in light of the storm.

That morning, as the storm hit, the four-story building shook.

"I could hear a bit of a rumble," Ollendorff recounted. "And what I would describe as a crackling and then I came out to the front of the room where my daughter was still sleeping, and yeah, it was, it was pretty radical to see a swath of these trees behind me cut down."

Ollendorff turned the camera to the carnage of trees outside of the hotel. He said that despite this being the first tornado-warned storm he's had to weather, he and his daughter had felt relatively safe. 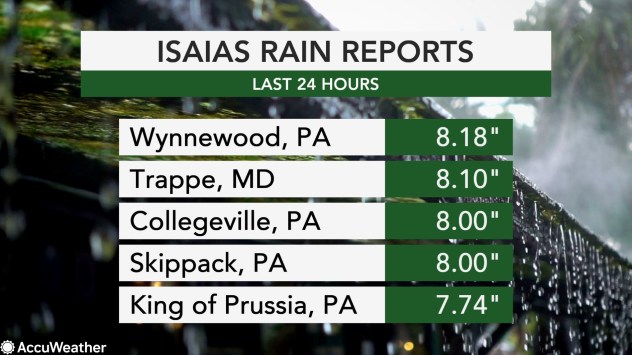 The risk of flooding also travels with Isaias, with the bulk of the threat traveling inland rather than staying confined to the coast.

Flash flood warnings and watches stretched across the I-95 corridor in the mid-Atlantic into Tuesday afternoon, and video over social media showed floodwaters inundating the streets of Bridgeport, Pennsylvania.

The Little Lehigh Creek near Allentown, Pennsylvania, reached a record 12.76 feet, which breaks the old record crest of 11.8 feet set during Hurricane Agnes in 1972. Perkiomen Creek in the northwest suburbs of Philadelphia experienced record flooding on Tuesday night, sparking the evacuation of the Providence Place Senior Living Center at the former Collegeville Inn location.

Authorities in Pennsylvania were searching for a man who was reportedly last seen in the water at Ridley Creek State Park near Philadelphia Tuesday afternoon.

Motorists became stranded in rapidly rising floodwaters in Philadelphia on Tuesday morning. Police officers were captured rushing to the scene to help, and no injuries were reported, according to The Associated Press.

Satellite imagery of Isaias hitting the northeastern U.S. after making its way up the coastline early Tuesday afternoon. (AccuWeather)

Farther south, the first states that Isaias impacted were still recovering from the damage. Isaias slammed into the coast of North Carolina Monday night as a Category 1 hurricane.

One house was washed completely off its foundation in Oak Island, North Carolina.

There were a total of 26 tornado reports across four states from Monday into Tuesday morning, spanning from North Carolina to New Jersey according to the SPC.

A tornado near White Stone in Lancaster, Virginia, injured two people and decimated the structures in its path, the SPC reported. The report was listed at 5:42 a.m. EDT Tuesday.

A radar-confirmed "large and extremely dangerous" tornado trekked toward Downtown Suffolk, Virginia, around 3 a.m. EDT. According to the NWS, the early-morning twister took down trees and power lines and damaged the roofs of homes, but there were no reported injuries.

By 9 a.m., Route 58 in Southhampton County, Virginia, was closed after a NWS-reported tornado near Courtland struck around 2:55 a.m. Tuesday. The report noted major damage to structures and trees, and photos from social media showed trucks flipped onto their sides, debris scattered across yards and buildings shredded.

Residents along Carolina coast assess fallout after Isaias thunders ashore as a deadly hurricane
Tropical Atlantic could turn ‘hyperactive’ as peak of hurricane season looms
ACE Index serves as harbinger of intense 2020 hurricane season
Report a Typo
Comments that don't add to the conversation may be automatically or manually removed by Facebook or AccuWeather. Profanity, personal attacks, and spam will not be tolerated.
Comments
Hide Comments