It was in September of 1947 that Hurricane George became the first named tropical system to make landfall in the continental U.S., causing destruction in Fort Lauderdale.

You know Katrina, Harvey and Sandy. Before that came Andrew, Hugo and Agnes.

These are some of the most notorious hurricanes that have ever impacted the United States. But how is it that we know them?

Well, by their names, of course.

But while the formation and devastation of tropical storms may be as old as the oceans themselves, the process of naming the natural beasts isn't nearly as dated. In fact, this year's 2022 season marks just the 75th anniversary of a named hurricane striking U.S. soil.

The history of when storms officially started receiving names is a muddied one. According to the National Hurricane Center (NHC), people in the West Indies were naming hurricanes for hundreds of years based on "the particular Saint's Day on which the hurricane occurred," thus infamous hurricanes Santa Ana in 1825, San Felipe in 1876 and San Felipe again in 1928 ran roughshod across Puerto Rico. 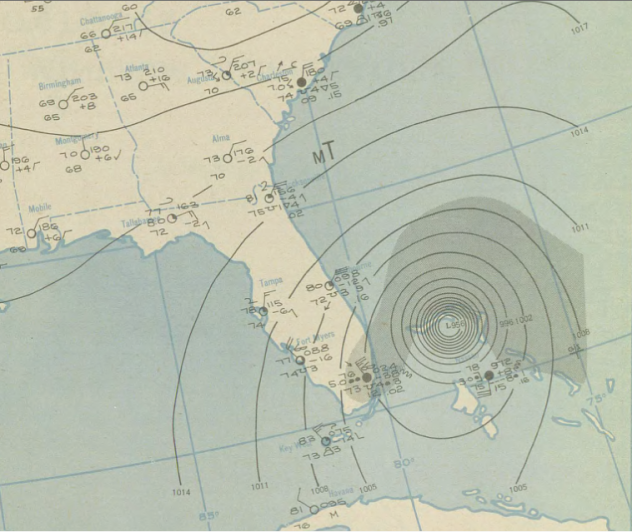 The impact of the Fort Lauderdale Hurricane in 1947. (Image via NOAA)

But it wasn't until the 1947 Atlantic hurricane season, 75 years ago this year, that U.S. officials officially labeled tropical storms with names from the Joint Army/Navy Phonetic Alphabet. However, since the names were limited to internal use and not included in public bulletins, they aren't included in the NHC's Hurricane Databases (HURDAT).

The NHC, in fact, doesn't even mention the 1947 season in its page covering the naming history of tropical cyclones. Like many others, the NHC considers 1953 to be the first season names were used to identify Atlantic storms, as that was the year an organized list of names was assigned alphabetically to storms. The 1950 Atlantic hurricane season is also considered by some to be the first year storms were given designated names, as that was the first-year names appeared in public advisories. 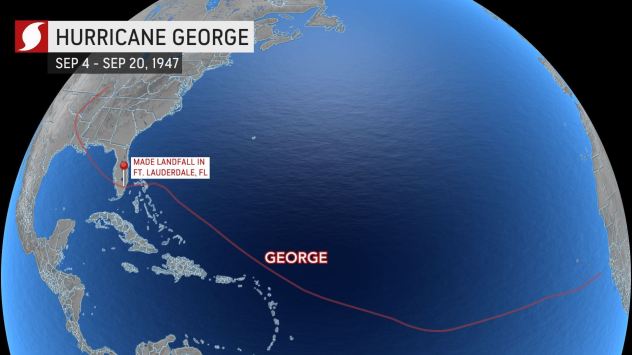 But when also factoring internal use within U.S. services, there was just one first named U.S. hurricane and it came in 1947.

And that storm was Hurricane George.

It was with this alphabet that the U.S. Air Force named tropical storms in the 1947 season. Before George came Tropical Storm One (Baker), Hurricane Two (Charlie) and Hurricane Three (Dog-Easy). Hurricane Three was given two names from the phonetic alphabet because the Air Force inadvertently believed it to have been two separate storm systems.

While Baker and Dog-Easy both left minor impacts on the U.S. as former hurricanes, it wasn't until Hurricane Four, which was given the phonetic alphabet name George, that a named hurricane struck American soil. 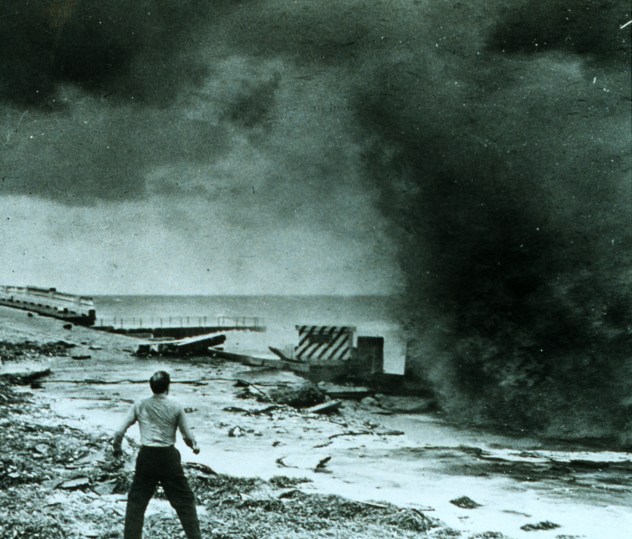 George began its journey into the history books on Sept. 2, as a tropical wave before quickly strengthening into a tropical storm two days later. Air Force meteorologists assigned it the name George just one day before it became a hurricane on Sept. 5.

From there, the season's fourth system would move in a southwestward direction for the next four days. Then, on Sept. 9, the hurricane made a northwest turn and rapidly strengthened, growing progressively stronger along its long journey before reaching peak intensity on Sept. 15, as a Category 4 hurricane with winds of 145 mph near the Bahamas.

Over the Bahamas, George's slow-forward movement left the storm stalled over Abaco Island for nearly 24 hours. There, it reached its fiercest sustained winds, topping out at 160 mph, and dumped more than 2 feet of rain.

That level of slow-moving devastation proved a frightening foreshadowing for what Abaco residents would experience yet again decades later with Hurricane Dorian in 2019, which also stalled over the island for 24 hours and laid ruin to the area with Category 5 winds.

Over the span of 24 hours, Dorian’s average speed was just 1.3 mph, the slowest speed for any major hurricane since records began in 1851.

But in 1947, meteorologists from the U.S. Weather Bureau (which would later be named the National Weather Service) forecast George to recurve up the East Coast and strike northeastern Florida or southeastern Georgia. Instead, it stayed its course and barrelled into Fort Lauderdale on Sept. 17, as one of the most damaging hurricanes the state had ever seen to that point.

The storm, which went on to most commonly be referred to as the 1947 Fort Lauderdale hurricane, slammed into the city with estimated wind gusts that ranged as high as 150 mph and up to 180 mph in other parts of South Florida. "DAVIE, FT. LAUDERDALE HANDED STAGGERING BLOW BY BIG STORM," blared the all-caps headline on the cover of the Fort Lauderdale Daily News.

Hundreds of homes were damaged or destroyed and the slow-moving system wreaked havoc on the Hollywood-Fort Lauderdale area. Jay Barnes wrote in the book Florida's Hurricane History that "few utility poles were left standing, many having been snapped like toothpicks."

George killed 17 Floridians, with many lives spared due to the era's improved warning and preparation systems. But the storm wasn't done after its initial impacts on the southeastern corner Sunshine State. Moving slowly across the state with a forward pace of just 10 mph, the system weakened gradually to Category 2 strength as it tracked across the peninsula, but the damage dealt in the areas of Fort Myers and Everglades City was anything but minor. 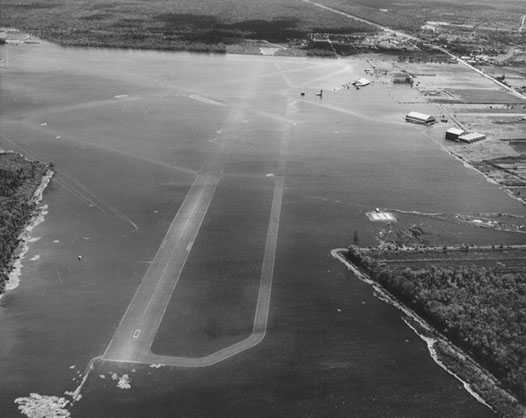 Moisant Airport in Jefferson Parish, Lousiana, was left completely flooded by Hurricane George. (Image via US Army Corps of Engineers)

On Sept. 18, the hurricane reentered open waters in the Gulf of Mexico and began moving towards the heavily-populated area of New Orleans. On its way, George unleashed chaos on multiple boating vessels, including the sinking of the Antonio Cerdedo, a fishing boat from Cuba, which lost seven crew members.

By the morning of Sept. 19, George slammed into the coast of Lousiana, passing over the business district of New Orleans and unleashing such severe winds that the wind instruments at Moisant Airport were left disabled. George dumped more than 2 feet of rain on Moisant Field and the rush of the storm surge topped 11 feet in some spots. A total of 12 people were killed in the state.

Following George, no other tropical storm would pass so close to New Orleans until Hurricane Katrina, 58 years later.

The storm also dealt a heavy blow to Mississippi, resulting in 22 deaths and driving the largest tides into coastal communities the state had ever seen to that point. In total, the historic, first-ever named hurricane to impact the U.S. was responsible for 51 deaths and $160 million of damage.