Taiwanese crews are preparing the island as large waves start crashing against the east coast ahead of Typhoon In-Fa.

Strengthening Typhoon In-Fa was nearly stationary Thursday evening, local time, as it spun in the western Philippine Sea, sending impacts in the form of wind and rain to Taiwan's eastern shores as it crept closer to its eventual landfall in China this weekend.

The typhoon is expected to move slowly but methodically to the northwest for much of the week and ultimately impact portions of Japan’s Ryukyu Islands, Taiwan and China. While areas hard-hit by flooding rain in parts of central China may be spared the heaviest downpours from In-fa, there may still be some tropical downpours that move into these same areas early next week as well. 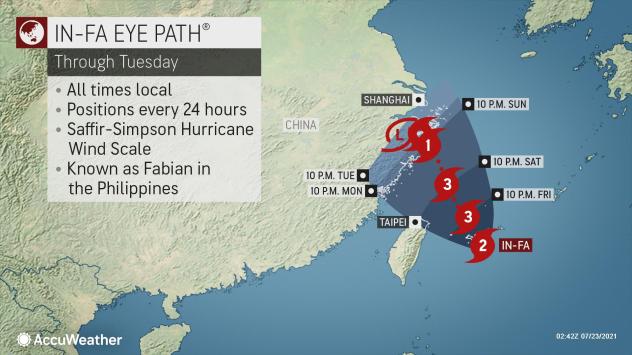 In-fa strengthened into typhoon force on Tuesday night, making it the third tropical entity to reach typhoon-strength in the West Pacific basin this season. The first of the season was Typhoon Surigae back in April and the second was Typhoon Champi which sprung to life in late June.

In-fa is also known as Fabian in the Philippines due to the naming convention of the Philippine Atmospheric, Geophysical and Astronomical Services Administration (PAGASA).

Impacts to the Ryukyu Islands began early Wednesday morning, local time, as the outer rain bands of In-fa move over the area. For Taiwan, rounds of heavy rain from the periphery of the storm began moving across the island early Thursday, local time. Strong wind gusts will gradually increase across the region Thursday into Thursday night. 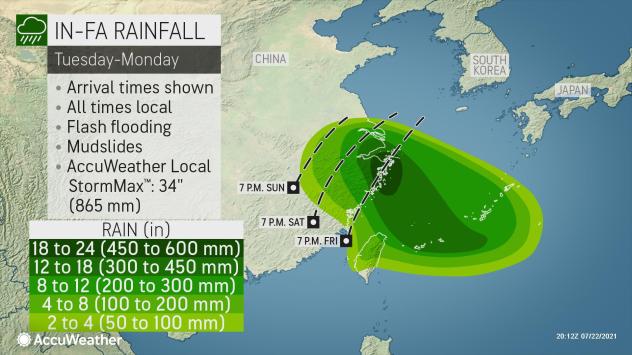 Rainfall will become more intense over the Ryukyu Islands as In-fa slowly tracks over the area at midweek.

Portions of the Okinawa Prefecture could eventually be right in the bull's-eye of heaviest rain from In-fa. AccuWeather forecasters predict a general 12-18 inches (300-450 mm) of rainfall for the area with an AccuWeather Local StormMax™ of 24 inches (600 mm).

Winds at least the equivalent of a tropical storm and hurricane-strength, in Atlantic and East Pacific basins, are forecast to arrive for the Ryukyu Islands along the same time as the rainfall from In-fa on Wednesday morning.

After tracking over the Ryukyu Islands, there is potential for In-fa to gain some additional strength. 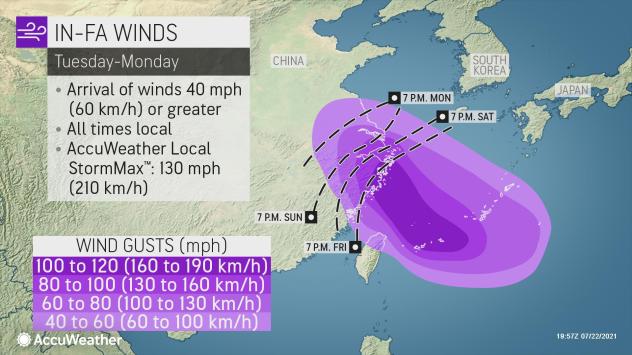 "Some moderate wind shear in the area will hinder any rapid strengthening of In-fa; however, there is some potential for the storm to reach the equivalent of a Category 3 hurricane (sustained winds of 110-129 mph or 178-207 km/h) on the Saffir-Simpson Hurricane Wind Scale," AccuWeather Senior Meteorologist and Lead International Forecaster Jason Nicholls explained.

The strongest winds with In-fa will be located right around, and just north and east of the center of where the storm ultimately tracks. While the southern Okinawa Prefecture will likely be in the bull's-eye for the heaviest rainfall, the area will also be at risk for the strongest wind gusts.

Winds and rain from In-fa will reach Taiwan as early as Thursday and China as early as Friday. 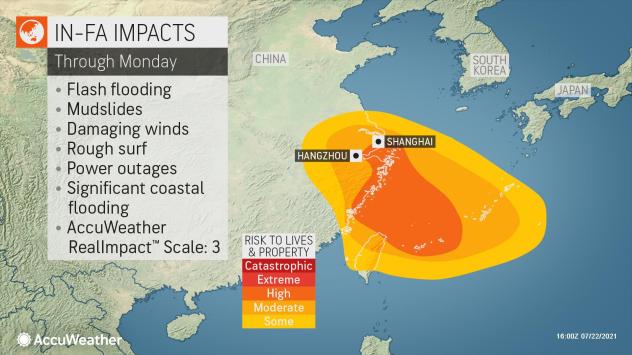 Taiwan may miss out on the worst of the impacts from the storm, but it will not be completely out of the woods in terms of wind and rain.

"In-fa is forecast to pass near or just north of Taiwan later Friday and Friday night, local time, before making landfall in eastern China on Saturday, local time," Nicholls said.

AccuWeather meteorologists are closely monitoring a scenario that would bring the center of In-fa much closer to northern Taiwan, which would result in more severe impacts to the country.

The combination of wind and rain from In-fa can lead to flash flooding issues, mudslides and damage to trees, power lines or structures for the impacted areas across Japan, Taiwan and China.

The second feature being tracked by forecasters in the basin is Tropical Depression Cempaka. This system strengthened to a severe tropical storm on Tuesday morning, local time. Cempaka has since lost wind intensity over land. 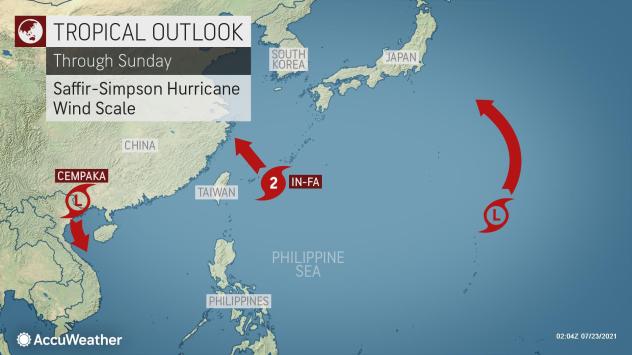 As of Tuesday afternoon, local time, Shangchuan Island, just a few miles off the coast of mainland Guangdong province, had already picked up 12.81 inches (326 mm) of rainfall in about 24 hours.

By Thursday afternoon, local time, much of the rainfall had come to an end. However, spotty downpours will still be possible over the next 24 hours.

A tropical depression also formed in the Philippine Sea early on Friday morning, local time. The system has the potential to throw a wrench in the schedule for some events at the rescheduled Tokyo 2020 Olympics.

Space, weather come together for Friday night sky event
How the Bootleg Fire is generating its own weather
Chinese city inundated with a year's worth of rain in just 4 days