AccuWeather forecasters say a number of factors will influence Ian's strength as it heads for Florida, but excessive rainfall, winds and storm surge are all expected.

Hurricane Ian continued to rapidly intensify through early Tuesday morning, strengthening into a major Category 3 hurricane as it approached Cuba. Next in the path of the powerful hurricane will be the Florida Peninsula with a strike along the central Florida west coast Wednesday evening.

Over the course of 24 hours, 5 a.m. Monday through 5 a.m. Tuesday, Ian's maximum sustained winds jumped from 75 mph to 125 mph, meeting the criteria for rapid intensification.

Hurricane watches were upgraded to warnings for a stretch of Florida's western coast Monday evening, including Tampa and Fort Myers, and a hurricane warning was issued for Dry Tortugas, an island in Monroe County, Florida, as Ian continued to gain strength as the fourth hurricane of the 2022 Atlantic hurricane season. AccuWeather forecasters warn that the storm will continue to gain intensity during the next couple of days and is forecast to become a Category 4 behemoth in the Gulf of Mexico as early as Tuesday evening. 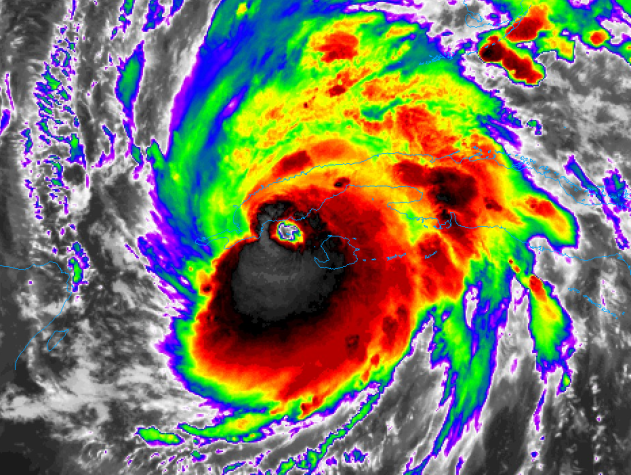 Hurricane Ian just off the coast of western Cuba, shortly after becoming a Category 3 storm. (College of DuPage)

As of 8:00 a.m. Eastern Time on Tuesday, Ian had sustained winds of up to 125 mph and was moving northward at 12 mph, according to the National Hurricane Center. Ian's center was located about 10 miles to the north-northeast of Pinar del Río, Cuba, with the storm's most intense wind and rain currently onshore. Hurricane-force winds extended up to 35 miles from the storm's center, while tropical-storm-force winds extended outward up to 115 miles.

After a historically quiet start to the 2022 Atlantic hurricane season, a flurry of tropical activity has changed the course of the season recently, and Hurricane Ian is no exception.

With the looming threat of Ian to the U.S., Florida Gov. Ron DeSantis declared a pre-landfall state of emergency for the entire state on Saturday afternoon and urged residents to be prepared for Ian's impacts. DeSantis also stated Sunday that he has activated the National Guard to help with the landfall, as well as power crews to aid with power renewal post-storm.

The storm formed in the central Caribbean on Friday, after the system first became noteworthy several days prior, when it remained a disorganized area of showers and thunderstorms located just east of the Caribbean Sea. Shortly thereafter, AccuWeather meteorologists recognized it as a possible threat to the United States, and that remains the case as the storm has turned northwestward. 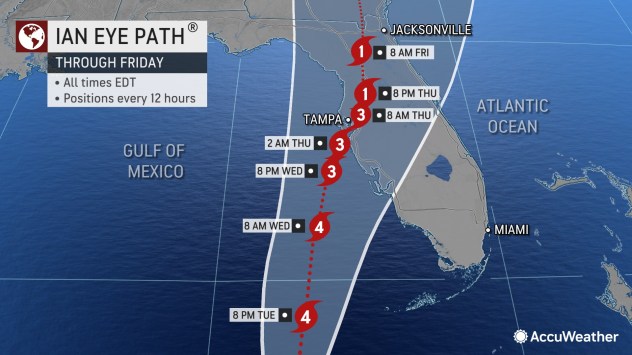 "The quick uptick in strengthening early this week will raise the likelihood of significant impacts in the western Caribbean, and eventually the United States," AccuWeather Senior Meteorologist Adam Douty explained, noting that while strengthening would pause as Ian moved over Cuba, additional intensification was likely to the north of the island.

"By Wednesday, Ian may be a large Category 4 hurricane," Douty also cautioned.

Some of the storm's worst impacts may occur in western Cuba, where a hurricane warning was issued Sunday morning. 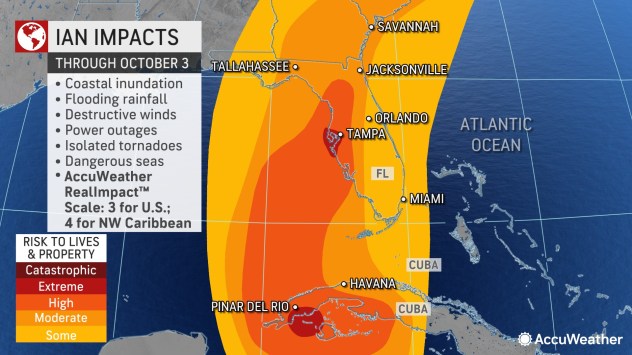 Conditions in western Cuba are likely to be at the worst through Tuesday afternoon, with destructive winds and storm surge battering the island, along with flooding rainfall.

Tuesday morning may bring the worst conditions, with destructive winds and a storm surge of over 6 feet in some areas. In this area, wind gusts reaching 120-140 mph (195-225 km/h) appear likely, with an AccuWeather Local StormMax™ of 150 mph (240 km/h) possible in the most impacted spots.

Moving toward midweek, the focus will quickly turn to the United States, where landfall is increasingly likely. Ian is expected to miss most of Cuba's high, mountainous terrain that often disrupts tropical systems, allowing the storm to become a powerful Category 4 hurricane.

However, what happens afterward will depend largely on the exact track that Ian takes. This will be determined by a southward dip in the jet stream across the United States, which will help act to pull the storm northward and into the coast. Just how quickly this interaction happens will determine the precise track of Ian, and where the storm will make landfall on Florida's west coast. 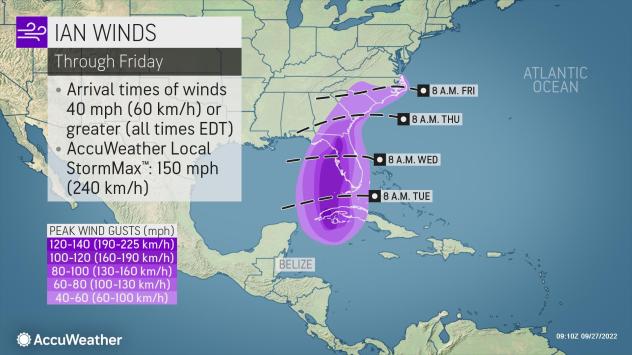 As an additional factor, Ian is likely to slow down on approach to land, increasing the amount of time that heavy rain and a major storm surge will batter the coast. While Ian could lose a bit of wind intensity as it moves at such a slow pace, damage and impacts along the coast could be substantially worse. As such, it is important to not just focus on Ian's category on the Saffir-Simpson Hurricane Wind Scale, but also the rain and surge impacts.

Regardless of Ian's wind speed and category at landfall, extreme impacts are likely to come in the form of extremely heavy rain. As is often the case with hurricanes, Ian's heaviest rainfall is expected to fall east of the storm's center. Because of this, cities such as Orlando and Jacksonville could all have a general 4-8 inches of rainfall, with locally higher amounts. Meanwhile, locations near Tampa could see even higher totals surpassing a foot in spots. Depending on where the heaviest rain falls, a localized spot or two could see rainfall totals approach the AccuWeather Local StormMax™ of 30 inches, which would cause extensive flooding given the slow-moving nature of the storm. 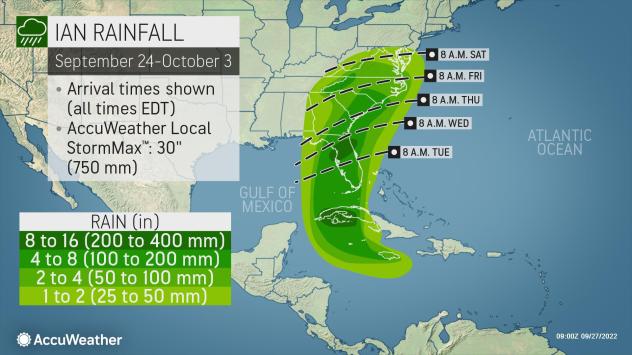 In anticipation of the rainfall and other landfall impacts, Bethune-Cookman University in Daytona Beach announced a mandatory campus evacuation for Monday. In Tampa, Hillsborough County Public Schools, as well as county government offices, will be closed for much of the week, as is the case in over two dozen counties across the state.

Meanwhile, storm surge may be the most significant threat, regardless of Ian's ranking on the Saffir-Simpson Hurricane Wind Scale. With several days of onshore winds, coastal flooding could be the most severe and far-reaching impact as Ian crawls northward.

"Based on a track with the eye of a major hurricane just offshore of Tampa, the Tampa Bay area can expect a water level rise of 6-10 feet," AccuWeather Hurricane Expert Dan Kottlowski said. 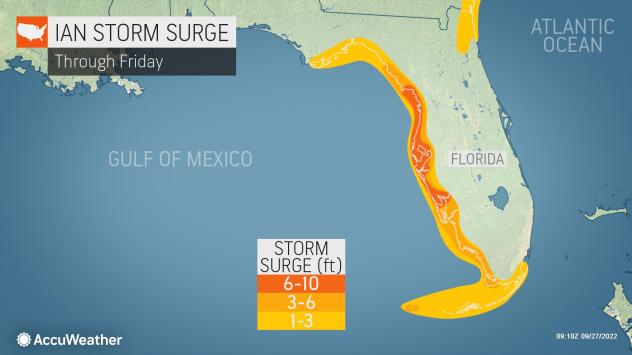 Nearly 200 miles to the northeast of Tampa Bay, areas along the St. Johns River, especially the Jacksonville, Florida, region may be at risk for significant storm surge. The combination of stiff easterly winds and heavy rain can push river and estuary levels to the point of significant flooding.

Because of the persistent threat of storm surge along the Gulf coast of Florida, in addition to widespread damaging winds and flooding rainfall, Ian has been designated a 3 on the AccuWeather RealImpact™ Scale for Hurricanes in the United States, meaning AccuWeather forecasters believe the storm poses a high risk to life and property across a significant portion of Florida.

Along with the likelihood of flooding and high winds directly from Ian will be the potential for severe thunderstorms and tornadoes over the Peninsula, especially were pockets of dry air allow the sun to emerge for a time.

AccuWeather forecasters began warning of the potential for a hurricane to threaten Florida early last week in order to put people on alert to take the necessary precautions to save lives and protect property. As Ian strengthens, the entire AccuWeather forecasting team is urging those in the path of the storm to stay vigilant and heed the advice and orders of local officials.

Beyond Florida, slow movement of Ian will cause a host of problems over the southeastern U.S. late this week into this weekend. Prolonged rainfall is likely to lead to flooding in some locations, and an ongoing risk of severe thunderstorms and tornadoes will be a concern from Florida to Georgia and the Carolinas.