The hurricane was just shy of Category 5 force and was moving onshore along on the west coast of Florida on Wednesday afternoon, threatening major catastrophe.

Hurricane Ian, nearly a Category 5 storm packing 150-mph sustained winds, was moving onshore along the lower west coast of Florida, threatening disaster from life-threatening flooding and wind damage and drawing comparisons to some of the most notorious hurricanes to ever blast the state. AccuWeather forecasters continued to hone in on precisely where landfall will occur and have upped the storm’s rating on the AccuWeather RealImpact™ Scale for Hurricanes to a 5 -- the scale’s highest designation.

"Ian was hitting as the strongest hurricane on record for the southwestern to west-central part of the Florida Gulf coast," AccuWeather Hurricane Expert Dan Kottlowski said.

At 2:24 p.m., AccuWeather meteorologists estimated that the center of the hurricane crossed North Captiva Island, Florida, which is one of the barrier islands along Pine Island Sound. 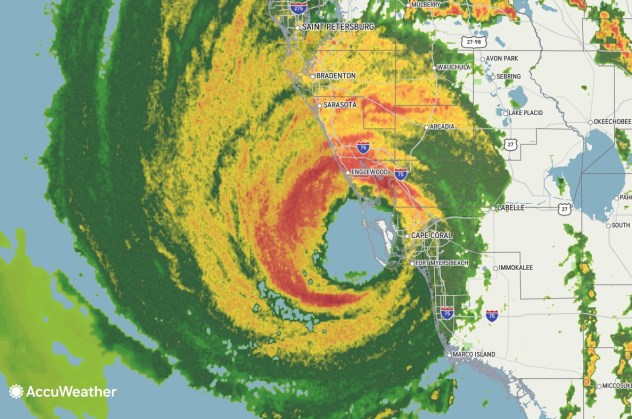 The small island communities of Cabbage Key and Boca Grande, Florida, may have been totally inundated by storm surge from Ian, as well as the full wrath of the hurricane's destructive eyewall.

The major hurricane strengthened to a high-end Category 4 early on Wednesday morning over the bath-warm waters of the eastern Gulf of Mexico, and will make landfall along the west coast of Florida Wednesday afternoon, putting places from Tampa to Fort Myers at risk for extremely dangerous storm surge among other hazards. Steering winds have picked up Ian and are whisking it to the north-northeast at a steady pace toward the west coast of Florida with projected landfall between 2 and 3 p.m. on Wednesday south of Venice and northwest of Fort Myers.

AccuWeather forecasters have rated Ian a 5 on the AccuWeather RealImpact™ Scale for Hurricanes for the United States due to the dangers and anticipated magnitude of damage that stem from flooding rainfall and powerful winds even for areas well inland from where the Ian crashes onshore early afternoon on Wednesday. 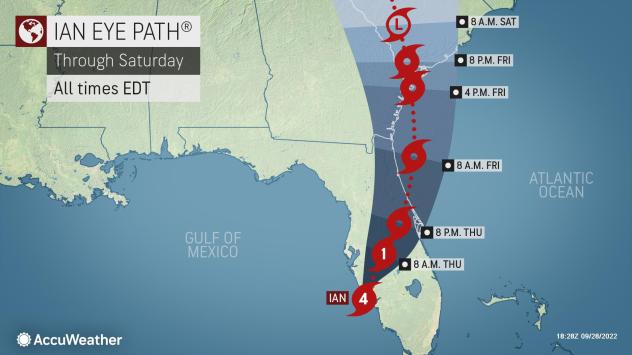 Hurricane warnings were in effect along the Florida west coast from Chokoloskee to Anclote River, including Tampa Bay, from Sebastian Inlet to the Flagler/Volusia County line as well as the Dry Tortugas. A tropical storm warning was in effect from Anclote River to the Suwannee River and from Flamingo to Chokoloskee, all of the Florida Keys, Lake Okeechobee, from Flamingo to Sebastian Inlet, the Flagler/Volusia County line to the Little River Inlet, and the islands of Bimini and Grand Bahama.

After exploding into a Category 4 storm, Ian will lose some wind intensity due to disruptive wind shear before it turns to the northeast and makes landfall along the west-central coast of Florida late Wednesday to Wednesday night. AccuWeather forecasters warn that the full force of a major hurricane should be expected as Ian slams into central Florida.

As steering breezes ease from Wednesday to Thursday, there is the potential for the storm to slow down as it drifts inland on a northeasterly path across the Florida Peninsula, which can exacerbate dangers by increasing the duration of flooding rain, high winds and coastal inundation. 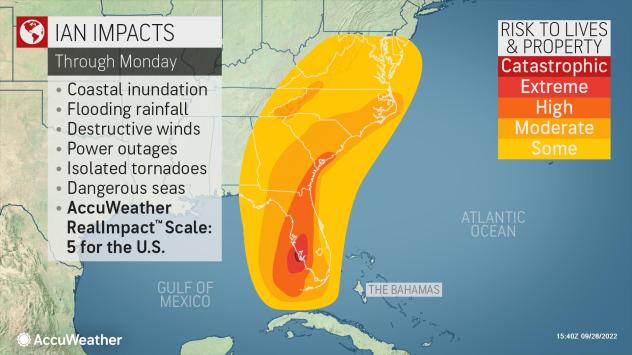 The effects of the large hurricane will be far-reaching across the Florida Peninsula with damaging wind gusts and power outages possible throughout. The greatest risk to lives and property will be due to storm surge and coastal inundation.

"The worst conditions in terms of storm surge will depend on exactly where the center of the storm moves inland along the Florida Gulf coast," Kottlowski said.

"Should the center of the storm move in well south of St. Petersburg, as we believe now, then communities around Tampa Bay would be spared the worse water rise. In this case, however, an inundating water level rise is foreseen in areas farther south, from Venice to Port Charlotte and Cape Coral," Kottlowski explained. Communities around Charlotte Harbor could experience a water level rise of 15-20 feet. This encompasses much of the same area that was hit so hard by Hurricane Charley in 2004. 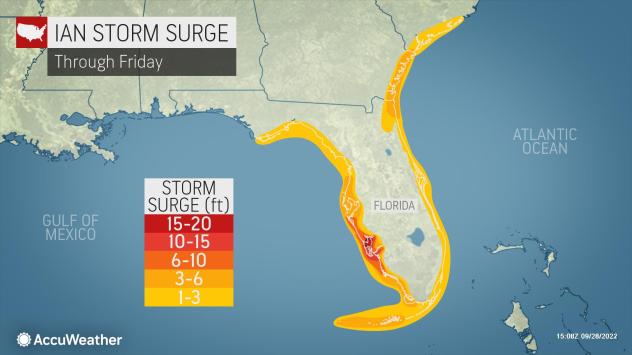 A water level rise of 10 to 15 feet, which can occur anywhere just south of where the eye makes landfall, is expected to have catastrophic consequences.

Even if the center of Ian tracks in south of St. Petersburg, torrential rain and storm surge will still lead to significant coastal and inland flooding in the Tampa Bay area. At this time, AccuWeather meteorologists anticipate a water level rise of 3-6 feet in Tampa Bay communities. Both of these conditions are a concern for areas in Florida as far away as Jacksonville, which is about 200 miles Northeast of Tampa along the state's northern Atlantic coast. 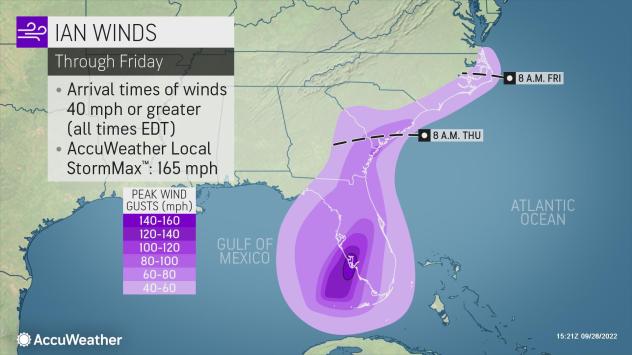 "Easterly winds will push Atlantic Ocean water toward the Florida east coast," Kottlowski said. "The combination of easterly winds and torrential rainfall can lead to a double-whammy effect with significant flooding along the St. Johns River in the Jacksonville area." A water level rise of 3-6 feet is likely along the lower portion of the St. Johns River with a storm surge of 1-3 feet anticipated along much of the Florida east coast.

Power outages could be long-lasting in some communities. 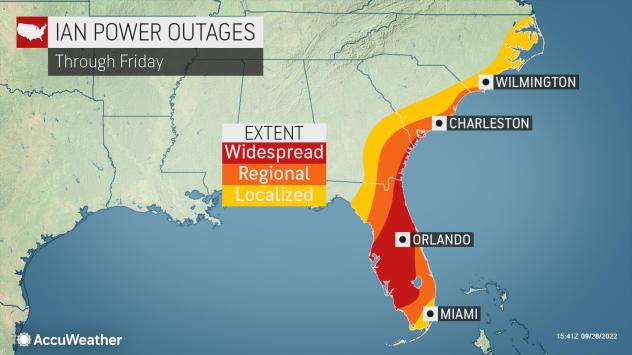 Wind gusts frequenting 100-140 mph will be widespread along the southern portion of the Florida west coast. An AccuWeather Local StormMax™ wind gust of 165 mph is possible near and just to the northeast of the point of landfall. However, powerful gusts to hurricane force (74 mph or greater) will be felt over a large part of the Florida Peninsula as Ian tracks to the north-northeast.

Torrential rain will be the most frequent near and north of the storm track with a general 8-18 inches and an AccuWeather Local StormMax™ rainfall of 38 inches forecast. Even though the soil is sandy and porous over much of Florida, rainfall of this magnitude will lead to widespread flooding in central and northern Florida. 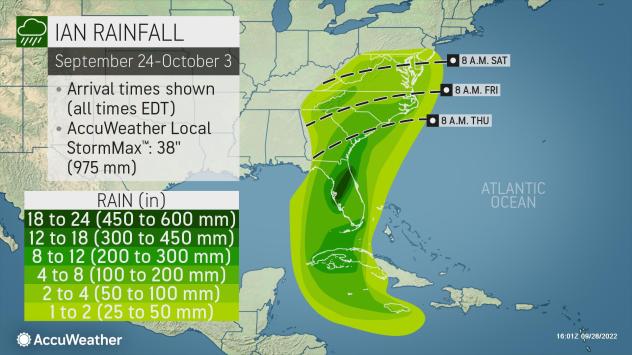 Major urban flooding is likely around Tampa, Orlando, Ocala and The Villages. However, localized incidents of flooding rain can occur farther south over the Florida Peninsula, including in places like Melbourne, Miami and West Palm Beach, as well as the Florida Keys due to spiral bands.

Severe thunderstorms, some with the potential to spawn brief tornadoes, will add to the danger and risk of power outages and property damage more than 100 miles from where the center of Ian makes landfall. Waterspouts will pose dangers to coastal areas, and some of these may come ashore as tornadoes.

AccuWeather forecasters began alerting the public of the potential for a hurricane to threaten Florida early last week in order to give people time to take the necessary precautions to save lives and protect property. With Ian continuing to strengthen, the entire AccuWeather team is urging those in the path of the storm to stay vigilant and heed the advice and orders of local officials. 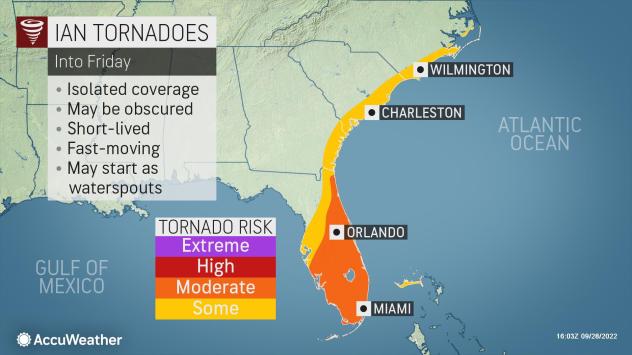 The risk to lives and property from the effects of Ian will extend well beyond Florida. Slow forward motion of the storm could have serious consequences for other states such as Georgia, the Carolinas, Virginia, West Virginia and the eastern parts of Tennessee and Kentucky.

There is the likelihood for Ian to move over the Atlantic Ocean for a brief time after crossing the Florida Peninsula. Ian may drift off the coast of northeastern Florida on Friday, before turning back toward the U.S. coast this weekend. Because of Ian's initial intensity, while hitting the Florida coast and a steady speed while crossing the Peninsula, the system is likely to emerge in Atlantic waters off the upper east coast of Florida as a strong tropical storm. There is a chance that Ian could regain hurricane strength before making a second U.S. landfall Friday evening near the Georgia and South Carolina border.

The latest indications are that Ian, as a tropical storm, depression or rainstorm, will wander slowly northwestward over the Southeastern states through the weekend and threaten the likelihood of torrential rainfall and flooding. Near the Georgia and Carolina coast, there is also the potential for inundation due to both storm surge and heavy rainfall.