Henri to take aim at the Hamptons as a hurricane

As the summer winds down, fewer lifeguards will be on duty. That makes it especially important to know what to do if you get trapped in a rip current.

For the most-up-to-date information, check out the latest version of this story here.

Henri was on the cusp of hurricane force over the western Atlantic on Friday evening. As the storm’s track becomes clearer, AccuWeather meteorologists emphasized that time was running out for Long Islanders and New Englanders to take action and get ready for the arrival of a hurricane that’s coming this weekend.

Henri is rated a 1 on the AccuWeather RealImpact™ Scale for Hurricanes due to the anticipated rainfall, damaging winds and storm surge set to impact Long Island and New England. "This is the most serious hurricane risk in New England in 30 years, since Hurricane Bob in 1991," AccuWeather Chief Meteorologist Jon Porter said of the looming threat.

Hurricane watches were issued by the National Hurricane Center (NHC) on Friday morning for a slew of areas ranging from the South Shore of Long Island, New York, to Massachusetts’s Nantucket, Martha’s Vineyard and Block Island. By early Saturday morning, the NHC has expanded tropical storm warnings to include New York City in addition to other parts of the metro area.

On Friday afternoon, Connecticut Gov. Ned Lamont announced through a tweet that he will be declaring a state of emergency ahead of Henri's landfall as well as requesting a pre-landfall presidential emergency declaration. 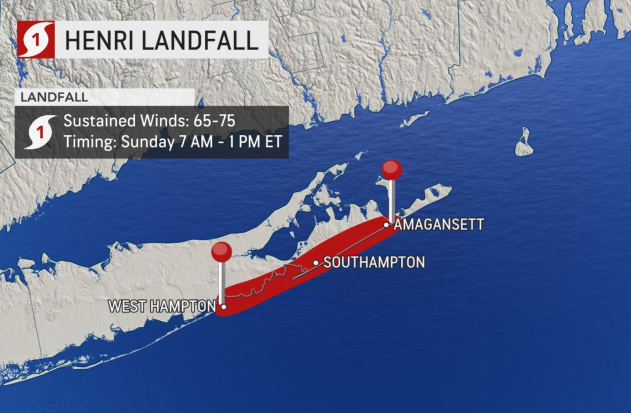 AccuWeather forecasters are calling for Henri to make landfall along the eastern part of Long Island, between West Hampton and Southampton, a stretch of New York known as the Hamptons. The Hamptons is home to some of the priciest real estate in the country and is a popular vacation spot for celebrities. Real estate is so valuable, there is a portion that is nicknamed "billionaire's lane."

As of 11 p.m. EDT Friday, the NHC said that Henri (pronounced: ahn-REE) was a strong tropical storm with sustained winds of 70 mph, which is just 4 mph shy of hurricane force and up from 65 mph in the morning. Tropical-storm-force winds extended out about 115 miles from the center of the storm -- up from 90 miles out earlier in the day. It was located 230 miles south-southeast of Cape Hatteras, North Carolina, and 615 miles south of Montauk, New York, and moving northward at 9 mph.

When Henri first formed near Bermuda it made for a trio of storms along with Fred and Grace in the basin -- or a Bermuda Triangle of sorts. On Friday, Henri was churning just along the upper edge of what is considered the mystifying Bermuda Triangle, which stretches from southeastern Florida to Bermuda and down to Puerto Rico, and where much folklore surrounds missing ships and planes. 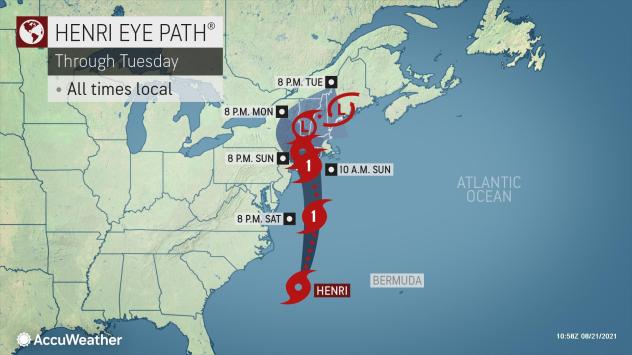 Henri will remain offshore of the mid-Atlantic beaches as it moves northward through Saturday. Even still, beaches from Savannah, Georgia, to Atlantic City, New Jersey, can expect some indirect impacts from the storm.

A 50-year-old father and his 28-year-old son were killed in a rip current near the Oak Island Pear in North Carolina on Wednesday afternoon, according to WECT. Bystanders pulled the father from the water, but emergency responders were unable to save him. A two-hour search ensued for his son, who was still missing, and his body was later recovered.

According to data from NOAA, more people have died as a result of rip currents on a yearly basis over the last decade than from lightning strikes or due to impacts from extreme cold combined. 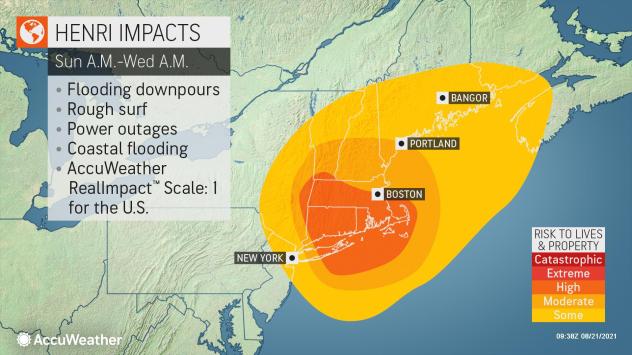 Into the weekend, AccuWeather meteorologists will monitor several factors to determine Henri’s exact path, which will determine impacts beyond dangerous surf conditions.

One such factor is a cold front that is forecast to grind to a halt and become stationary while draped over northern New England. The combination of the front and Henri may displace some moisture to the north and west of Henri's center later on Saturday. As that happens, heavy rain may pour down over portions of northern New Jersey, northeastern Pennsylvania, southern New York and Connecticut. 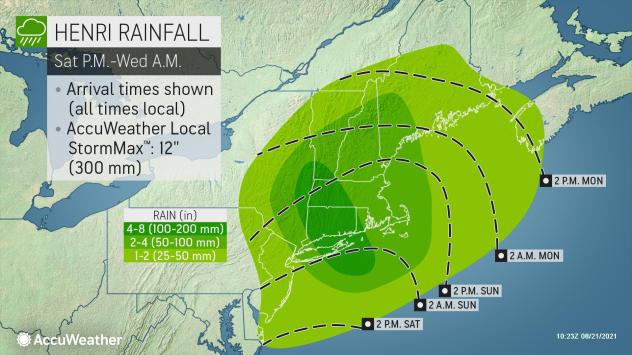 The rain could prove to be more than just a nuisance for vacationers and residents as it could result in flooding problems.

Residents in the Northeast and New England who will face another round of rain by the end of the weekend may still be cleaning up after tropical downpours unleashed by Tropical Rainstorm Fred. Since Fred unloaded several inches of rain, Henri's second dose of heavy, tropical rainfall may trigger flash flooding in the region more easily.

Widespread wind gusts of 40-60 mph may blast areas stretching from eastern New York state to coastal Maine. The strongest wind gusts are most likely to be near and just east of where Henri makes landfall. Wind gusts of 80-100 mph are predicted in Long Island, Connecticut and Rhode Island. 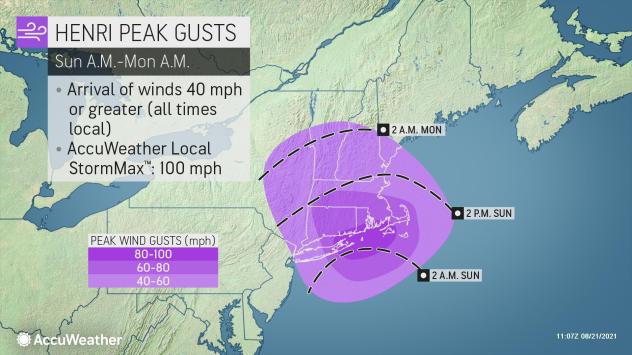 Winds of this magnitude will be capable of causing minor damage, as well as funneling water into bays and inlets and raising the water level along the coast.

Henri's arrival in the Hamptons will coincide with a full moon on Sunday. This combination could bring higher tides and more widespread coastal flooding than during a different lunar phase.

A landfall earlier during the day on Sunday could make the situation more difficult, according to AccuWeather Broadcast Meteorologist Melissa Constanzer. Sunday's high tide at Hampton Bays, which is between West Hampton and Southampton, will occur around 8:54 a.m. EDT, with the peak of the full moon on Sunday at 8:01 a.m. EDT.

"That will be an exaggerated high tide before landfall!" Constanzer warned.

Storm surge of 1-3 feet is forecast to expand from the southern New Jersey coast to Maine, and a 3- to 6-foot storm surge is anticipated from eastern Long Island to Cape Cod. 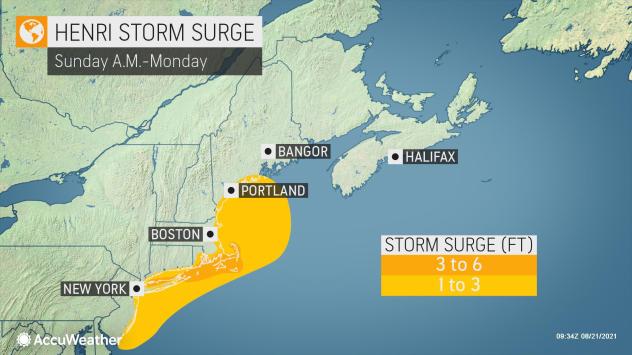 AccuWeather meteorologists began warning that the Atlantic coast, including southern New England, would be at risk for tropical hits this season in their fall forecast released in early August.

If Henri makes a second landfall in New England as a hurricane, as AccuWeather forecasters are predicting, it will be only the eighth time for a hurricane to strike the region since 1900. The last hurricane to make landfall in New England was Hurricane Bob in 1991. Bob made landfalls in Rhode Island and Maine and caused $1 billion in damage in Massachusetts. Winds greater than 100 mph and severe coastal flooding blasted Massachusetts during Bob’s rampage.

Hurricane Henri's landfall won't be its first brush with US mainland