Drenching rainfall will persist this week across the flood-weary southeastern United States, and AccuWeather forecasters say that tropical moisture from multiple sources will be to blame.

Heavy rainfall spread across the region already this week, with parts of the Florida Panhandle, Georgia and Alabama reporting several inches of rain Monday. Pensacola, Florida, picked up 8.16 inches of rain, coming in second for the wettest Oct. 4 for the city on record behind the same date in 1995 when Hurricane Opal made landfall in the western Florida Panhandle. This deluge of rain closed roadways in downtown Pensacola and also brought widespread travel disruptions across the region.

Flash flood watches and warnings were in effect across the Florida Panhandle, much of Alabama, northern Georgia, as well as across parts of Mississippi and Louisiana.

"A slow-moving storm will continue to draw in tropical moisture from the Gulf of Mexico, allowing for heavy downpours to continue streaming into the region through most of the week," said AccuWeather Senior Meteorologist Paul Walker.

Through the middle of the week, the same storm that brought these downpours is set to continue bringing rounds of rain to parts of Alabama, Georgia and Florida, the same locations that have already recorded inches of rain so far this month. Birmingham, Alabama, for example, has reported 4.87 inches of rain so far in October, and Columbus, Georgia, has already recorded more than 6.80 inches of rain, both of which are more than the normal monthly October rainfalls of around 3.25 inches. According to the National Weather Service, multiple water rescues were performed in West Birmingham, Alabama on Tuesday.

As the week progresses, the storm will slowly move northward, spreading the heaviest rain through the Appalachians, Tennessee Valley and western Ohio Valley and raising the threat for flooding in locations like Nashville. 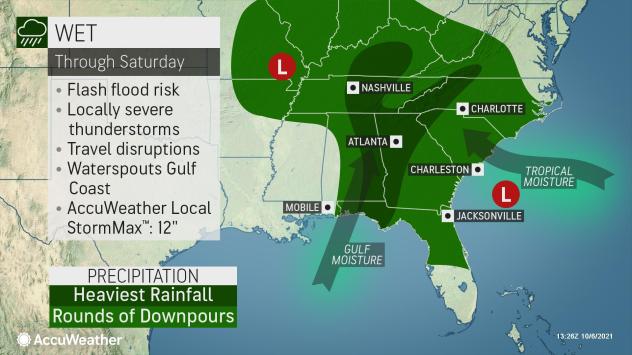 At the same time, tropical moisture from the western Atlantic Ocean will also flow into the area, further intensifying precipitation.

Some western portions of the region, like Mississippi and Alabama, may dry out by Friday, as the core of the moisture shifts northward and eastward.

"By the end of the week, many communities could be starting off the month of October with 6 inches of rain, with an AccuWeather Local StormMax™ of 12 inches possible," Walker added.

The wet weather is continuing the soggy stretch some locations along the Gulf Coast experienced in September. Pensacola, Florida, had 11.27 inches of rain during the month, 170% of normal, while New Orleans reported 9.38 inches of rain, which is 184% of normal.

While monitoring flooding threats in the Southeast, AccuWeather forecasters will also continue to keep a close eye on the potential for tropical development near the region, which is common during October. This includes watching a tropical low that is situated just north of the Bahamas.

"Although there will be plenty of tropical moisture flooding into the Southeast [from the feature], strong wind shear, or disruptive winds in the atmosphere, are likely to hinder the development of a tropical or subtropical storm over the next several days," said AccuWeather Senior Meteorologist Randy Adkins. 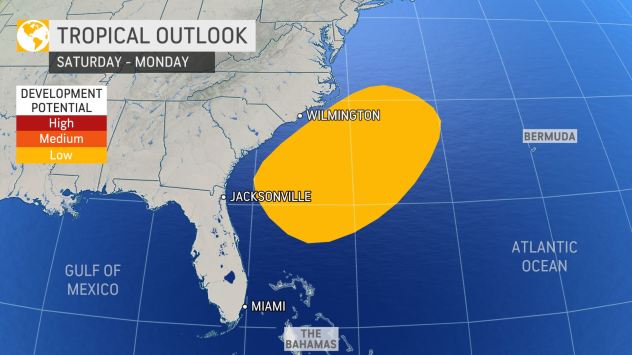 Adkins noted that atmospheric conditions could change this weekend or perhaps early next week, making tropical development slightly more likely. That will begin with a southward dip in the jet stream as the storm over the southeastern U.S. shifts northeastward.

The pattern change, combined with the persistent warm waters just offshore, could prove to be the right ingredients for a tropical feature to become better organized. If a system forms and its maximum sustained winds reach 39 mph or greater, it will be given the name Wanda, the last name on the designated list for the 2021 Atlantic hurricane season.

Should a tropical or non-tropical low develop off the southeast Atlantic coast over the weekend, it would continue to stir up the waters in the western Atlantic, just off the coast from Georgia and the Carolinas.

At this time, no direct impacts are expected from any feature that does form, as the system would likely track northeastward out over the Atlantic. Even still, beachgoers will continue to experience rough surf and rip currents from the Georgia coast to as far northward as New Jersey through the first half of next week. The nearby tropical moisture can also act to enhance rainfall along the East Coast.