It has been over a month since the Perseid meteor shower put on a dazzling display in the night sky in mid-August. For those who missed the annual summer spectacle due to poor weather conditions or for stargazers yearning for another meteor shower, October will bring two opportunities to spot shooting stars.

Since the autumnal equinox on Sept. 22, the nights have grown longer than the days in the Northern Hemisphere, and the longer nights will offer some great views of the planets in addition to the upcoming meteor showers.

For late-night stargazers, the changing of the season will also bring the return of some famous constellations. This includes the well-known constellation of Orion, which rises in the southeastern sky by 1 a.m., local time.

Here are the top three astronomy events to mark on your calendar in the new month: 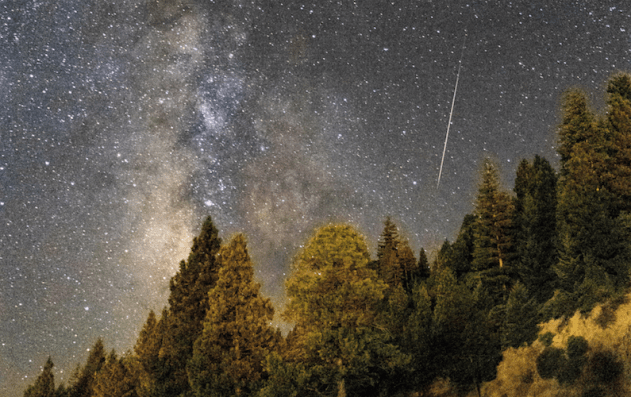 A meteor streaking next to the Milky Way. (Griffin Wooldridge)

The first full week of October will conclude with sparks in the sky as the Draconid meteor shower reaches its peak.

Unlike many other annual meteor showers, the Draconids are best seen in the evening shortly after nightfall, rather than during the second half of the night when many people are asleep.

This makes it a great meteor shower for younger stargazers who cannot stay up late, although the shower produces only around five to 10 meteors per hour.

Most meteor showers have a broad peak that lasts two or three nights, but the peak of the Draconids is short, occurring only on Friday, Oct. 8, according to EarthSky.

Jupiter and Saturn have been prominently featured in the night sky in recent months, and the middle of October will present another great opportunity to look for the planets as the moon appears almost directly between the pair.

The trio of celestial objects will be easy to spot in the southern sky right after nightfall on Oct. 14 with the three glowing together almost all night long. 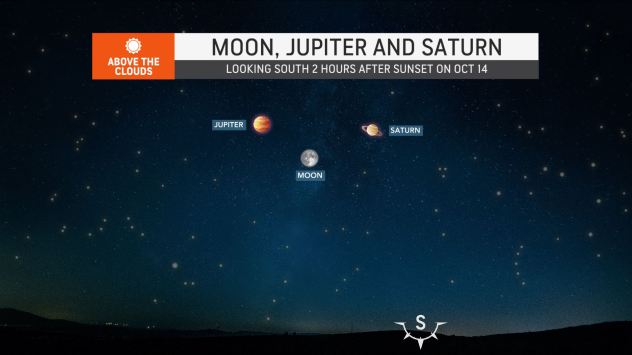 Planets and the moon are not to scale. The rings of Saturn will not be visible without a telescope. (AccuWeather)

Venus will also be shining in the evening sky, appearing slightly brighter than Jupiter, but it will be closer to the southwestern horizon. It will not be in the sky nearly as long as Jupiter or Saturn, dipping below the horizon around two hours after sunset.

No telescope is required to see the planets, but this will be a great chance to zoom in on Jupiter and Saturn with a telescope before the cold winter nights arrive.

Less than two weeks after the Draconids, the Orionids will peak in what is typically one of the best meteor showers of autumn.

Most meteor showers can be traced back to debris left behind by a comet, and the comet responsible for the annual Orionids is none other than the famous Halley’s Comet. However, the comet itself is not set to return to the night sky until 2061.

Most years, onlookers can count around 20 meteors per hour during the peak of the Orionids, but this year's viewing will be hindered due to the brightness of the moon. The nearly full moon will be shining all night long, making it difficult to see the dimmer shooting stars.

Skygazers that still want to hunt for shooting stars on the night of Wednesday, Oct. 20, into the early hours of Thursday, Oct. 21, should focus on a dark part of the sky away from the vivid moon.

After October concludes, there will be a few more meteor showers before the end of 2021, including the Leonids in November and the popular Geminids in December.