The ‘Blue Marble,’ an iconic image of Earth captured on the final Apollo mission to the moon, dates back to Dec. 7, 1972.

Cyclone Mandous will continue to bring dangerous impacts to India even as the storm moves well inland into Saturday.

The storm, named by the India Meteorological Department (IMD), formed on Thursday, local time, in the Bay of Bengal just to the northeast of Sri Lanka. The cyclone ramped up quickly and was packing maximum sustained winds up to 55 mph (90 km/h).

According to IMD's intensity scale, Mandous is a severe cyclonic storm. Put in terms of the Saffir-Simpson Hurricane Wind Scale, the cyclone was equivalent to the strength of a tropical storm in the Atlantic Ocean.

Heavy rain began to pound the Tamil Nadu coast on Thursday, with heavy rain beginning in the city of Chennai by Friday morning. On Friday evening, the storm had maintained its intensity and was inching northwestward towards the India coastline as drenching rainfall continued to move inland. The IMD reported some locations had around 2 inches (50 mm) of rain on Friday.

Ahead of the approach of Mandous, authorities in India were preparing for impacts. Officials said schools and colleges within the cyclone's projected path will be closed Friday, according to the Times of India. Several flights were canceled at the Chennai Airport as the storm approached, and 16,000 police personnel were deployed to the expected landfall location and ready to help, according to The Hindu. The IMD has also issued rain alerts in the country's southeastern states. 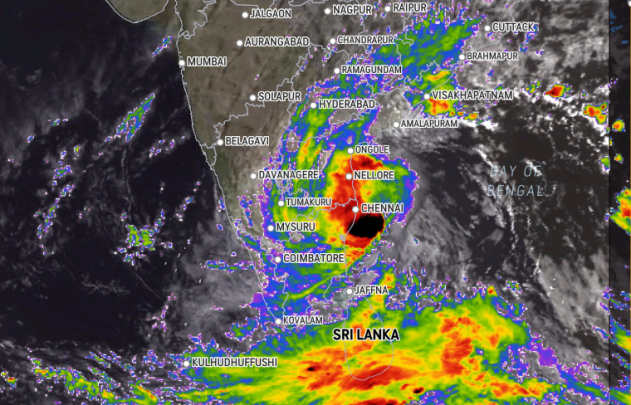 The impacts from Mandous are expected to linger across southeastern India into the weekend as the cyclone moves inland. While gusty winds are likely near and north of the landfall location, winds will diminish rather quickly once it moves inland. The Eastern Ghats, a mountain range extending from north to south not far inland in southeastern India, will help cause the cyclone to lose wind intensity over the weekend.

Instead, tropical rainfall will be the lingering impact in most communities.

AccuWeather forecasters expect a total of 3-6 inches (8-15 cm) of rain, with an AccuWeather Local StormMax™ of 8 inches (20 cm), around the area of landfall. Rainfall of this magnitude will lead to significant flash flooding on streets and highways, especially in the city of Chennai, due to poor drainage. Mudslides can also occur in the higher ground found farther inland. A much larger area in southern India will receive 1-3 inches (2-8 cm) of rain.

"Despite the expected loss of wind intensity, lingering moisture can lead to scattered rains across southern India from Sunday into early next week," said Nicholls.

"The leftover low-pressure center from Mandous will likely emerge over the Arabian Sea to the west of India on Monday, but it is unlikely to regenerate into a tropical system," Nicholls added.

Mandous will be the first tropical cyclonic storm to impact India since Sitrang brought heavy rain to the northeastern part of the country in October after making landfall in Bangladesh. It will also be the first direct landfall since Severe Cyclonic Storm Asani back in May.

The potential for tropical development in the Bay of Bengal was first mentioned by AccuWeather on Nov. 24 when a storm developed near Micronesia and before it tracked northwestward into the northeastern Indian Ocean. This storm would eventually become Mandous.