Conditions deteriorate as Nicole closes in on Florida coast

The outer edge of Hurricane Nicole's eyewall began to breach the Florida coast near Port St. Lucie around 1 a.m., local time, beginning the landfall process. However, official landfall likely won't be for another few hours as the storm's massive eyewall trudges ashore.

As the storm continues to move northwestward, the storm's official landfall, or when the center of the eyewall is over land, is likely to be between Fort Pierce and Vero Beach, according to AccuWeather forecasters.

“When the outer edge of the eyewall starts to make its way inland, we consider the storm has begun the process of making landfall,” AccuWeather Meteorologist Mary Gilbert said. “In the case of Nicole, since its eyewall is so large, it’s going to take a significant amount of time for it to actually make landfall.”

This is the second time in just over a month that the state is bracing for a hurricane, following Hurricane Ian’s devastation on Florida's southwest coast. The unusual November storm prompted a hurricane warning along the central part of Florida’s east coast Tuesday. Nicole continued to strengthen as it swirled across the western Atlantic from Tuesday to Wednesday, and AccuWeather meteorologists said the massive storm will make landfall as a Category 1 hurricane along Florida’s east coast early Thursday morning.

AccuWeather forecasters have rated Nicole a 1 on the AccuWeather RealImpact™ Scale for Hurricanes due to the dangers of a damaging storm surge, high winds and flooding rainfall. Impacts will also occur for a long duration since hazardous conditions will hammer parts of the state for as much as 48 hours.

Landfall is expected to occur in the Stuart, Port St. Lucie and Fort Pierce area of Florida sometime early Thursday morning, depending on if Nicole's forward speed changes. Just prior to noon, local time, on Wednesday, Nicole made landfall on Great Abaco Island, Bahamas.

Mandatory evacuation orders were slated to go into effect on Wednesday in parts of Palm Beach and Volusia counties in Florida, according to officials. 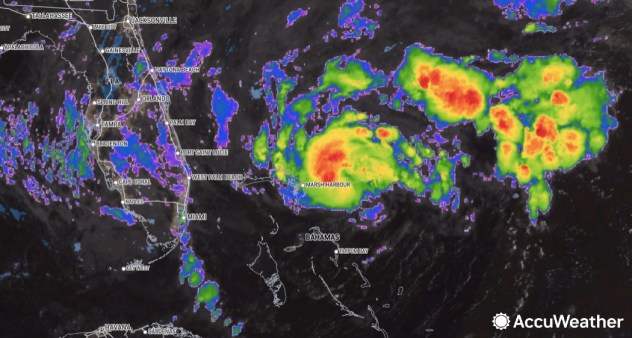 Nicole was in the center in this image captured on Wednesday, Nov. 8, 2022. Florida is located in the left portion of the image. (AccuWeather Enhanced RealVue™ satellite)

At 6 p.m. EST Wednesday afternoon, aircraft found that Nicole had strengthened to a Category 1 hurricane and was packing sustained winds of 75 mph. By 10 p.m., Nicole was located about 75 miles to the east of West Palm Beach and was moving toward the west at 13 mph.

Early Tuesday, Nicole transitioned from a subtropical storm with some non-tropical characteristics to a full-fledged tropical storm, which is a sign of ongoing organization. 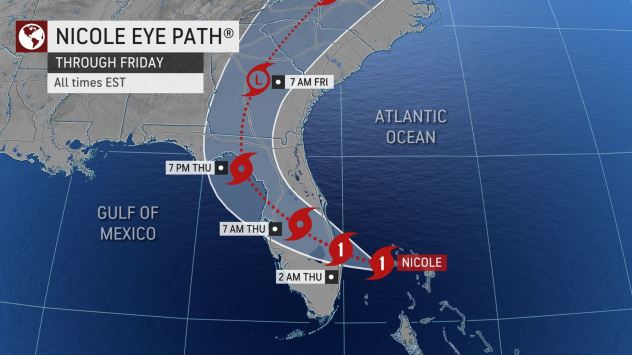 An anticipated slight turn toward the southwest occurred Tuesday night as Nicole approached the Bahamas. However, a gradual turn toward the west has begun over Atlantic waters as of the midday hours on Wednesday. A bit more of a turn toward the Northwest is likely just off the coast of Florida ahead of landfall in the Sunshine State Wednesday night, meteorologists say.

Sandbagging distribution sites were opened up in advance of the storm as Jacksonville issued a beach safety alert to warn beachgoers of “extremely dangerous ocean conditions.” One day earlier, on Monday, Florida Gov. Ron DeSantis declared a state of emergency in anticipation of Nicole's arrival.

Storm surge watches are in effect from the Savannah River to the South Santee River in South Carolina, as well as from the Suwannee River to Indian Pass in Florida.

A massive zone of tropical-storm-force wind gusts ranging between 40 and 60 mph will extend over an area encompassing about a half million square miles from west of Bermuda to the southeastern U.S. coast and the eastern Gulf of Mexico from Wednesday night to Thursday.

"In coastal areas, especially from the Space Coast of Florida through the Carolinas, tropical-storm-force wind gusts can occur for 36-48 hours straight," AccuWeather Director of Forecasting Operations Dan DePodwin said. "This is a longer duration than typical tropical systems." The lengthy period of impacts "will take a toll," he said.

A storm surge is likely to be one of the most damaging aspects of Nicole. A water level rise of 3-6 feet is forecast with locally higher levels, and that rise will occur not only on waters near where Nicole makes landfall along the central portion of the Florida east coast but also in areas hundreds of miles farther north. 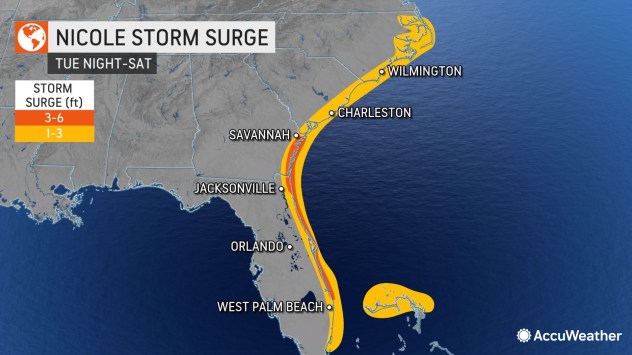 This means that beaches, dunes and coastal infrastructure that were compromised by Ian could be subject to further damage from Nicole. The storm surge of 3-6 feet can occur from just north of West Palm Beach, Florida, to near Tybee Island, Georgia. In many cases along Florida's east coast, conditions may be much worse during Nicole than Ian, because of Nicole's direct strike from the east.

High astronomical water levels associated with the proximity of the full moon from Tuesday and related king tides will contribute to the surge. The water level rise and eroding, pounding surf can last for a couple of days due to a broad zone of easterly winds ahead of the storm and its forecast trajectory across Florida. Water will be pushed into the back bays and tidal rivers and held there by the persistent winds. 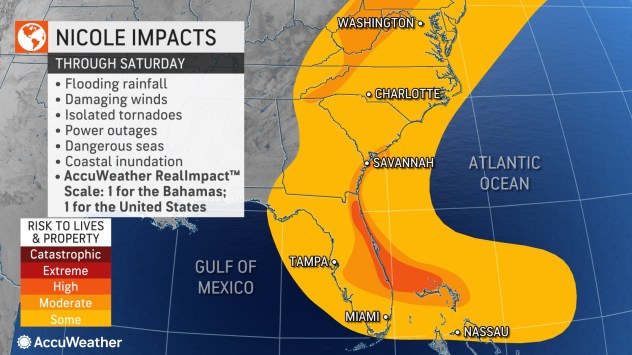 "The worst conditions are likely to occur within a couple of hours of high tide along the Florida east coast from Wednesday evening to Thursday morning," AccuWeather Senior Meteorologist Brett Anderson said. "But, if Nicole makes landfall during high tide, conditions could be much worse than if the storm rolls ashore during low tide." The difference in water level from low tide to high tide is about 4 feet.

Nicole is forecast to hit as a Category 1 hurricane on the Saffir-Simpson Hurricane Wind scale with maximum sustained winds of 74-95 mph. 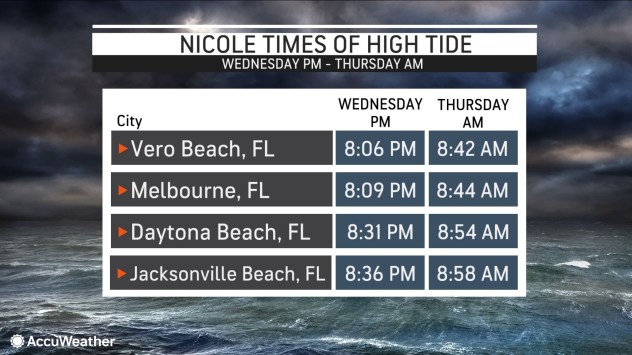 However, there is the potential for some last-minute strengthening of Nicole since it will pass over the warm water just off the Florida coast, known as the Gulf Stream, forecasters caution. This could result in a higher intensity on both the RealImpact™ scale and the Saffir-Simpson scale.

Gusts could approach hurricane-force along the Space Coast depending on the track of Nicole and that could pose a problem for the Artemis I moon rocket that sits on the launch pad.

Near and just north of Nicole's eye, wind gusts between 60-80 mph will occur with AccuWeather Local StormMax™ gusts close to 100 mph possible.

At this force, damage to structures can occur with significant power outages. However, because of the vast extent of Nicole's circulation, tropical-storm-force wind gusts and sporadic power outages can occur hundreds of miles away from where the center makes landfall and later tracks to the north. 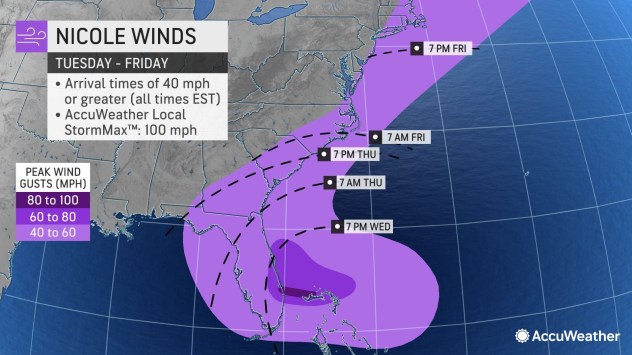 The heaviest rainfall will occur to the north of the storm center initially. However, as the storm tracks toward the northeastern Gulf of Mexico along the upper part of the Florida Peninsula, heavy rain will shift to the northeast of the track. Because of this, a broad zone of 4-8 inches of rain is forecast over the central and northern counties of the peninsula and is likely to lead to new rises on the rivers in the region, including St. Johns. An AccuWeather Local StormMax™ rainfall of 15 inches is anticipated in Florida.

Impacts in the Miami area are expected to be slight from Nicole unless the storm makes landfall much farther south along the Florida east coast. "It is possible there is a water level rise of 1-3 feet on Biscayne Bay, which could be pushed eastward toward Miami Beach from increasing westerly winds," AccuWeather Meteorologist Brandon Buckingham said. 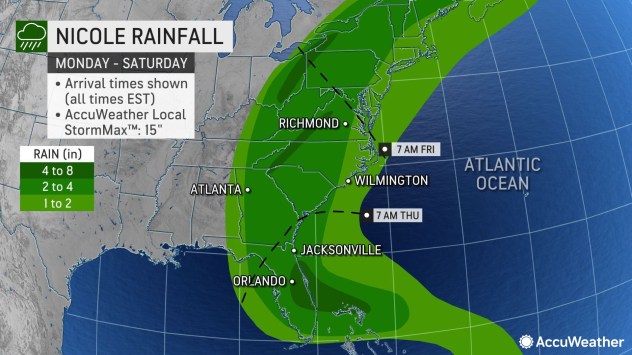 Impacts in Ian-ravaged southwestern Florida are expected to be minimal and similar to that of a tropical storm.

"Winds are not likely to be strong enough, long enough to push a significant amount of Gulf of Mexico water into coastal communities from Cape Coral to Marco Island," DePodwin said. The main concerns in southwestern Florida are likely to be from locally severe thunderstorms that can produce squally winds and perhaps a tornado or waterspout.

In the stretch from Orlando to Tampa, a combination of heavy rain and gusty winds can lead to localized flooding and sporadic power outages from Wednesday night to Thursday.

Beyond Florida, Nicole will turn northeastward and its forward speed will increase as the system transitions to a tropical wind and rainstorm while swinging across Georgia and the Carolinas from Thursday to early Friday.

The storm will continue to race along with substantial impacts in the northeastern U.S. from Friday to Friday night and in Atlantic Canada this weekend.

AccuWeather meteorologists will continue to monitor the tropics for additional development over the next several weeks. The areas stretching from the central part of the Atlantic to the Caribbean may remain potential trouble spots, forecasters say. The next two names on the list that forecasters use to name tropical systems are Owen and Paula.

The Atlantic hurricane season does not officially end until Nov. 30. Already the final month of the season has been quite active. Nicole followed the development of Lisa and Martin, making November notably busier than August, during which no tropical storms were named for only the third time on record.

LIVE: Nicole leaves 2 dead, homes on the brink of collapse

The historic hurricane that unleashed a blizzard