A tropical storm is forecast to develop in the south-central Caribbean Sea this weekend and strengthen into a hurricane prior to crashing into Central America, AccuWeather meteorologists say.

The system that could eventually become the next named storm in the Atlantic basin has had a history of producing torrential rain and flooding downpours in the islands of the southern Caribbean this week and is far from its peak intensity because it is still close to South America. This has made it harder for the system to organize.

However, as the system gradually moves away from land and over the warm waters of the Caribbean, it will encounter environmental factors that will allow it to become better organized and gather strength. The National Hurricane Center (NHC) designated the storm as Potential Tropical Cyclone 13 Thursday. Late on Thursday evening, the NHC determined that the potential tropical cyclone had developed a spin and the system was upgraded to Tropical Depression 13.

On Thursday afternoon, the government of Colombia issued a hurricane watch for San Andres Providencia and the Santa Catalina Islands. A tropical storm warning was in effect for the coast of Colombia from Riohacha to the Venezuela border.

Torrential downpours triggered flash floods in the Windward Islands of Trinidad and Tobago Wednesday. As downpours continued in parts of the southern Windward Islands Thursday, torrential rain was being unleashed in the islands of Aruba, Bonaire and Curacao, as well as part of northern Venezuela as the system continued to move westward. 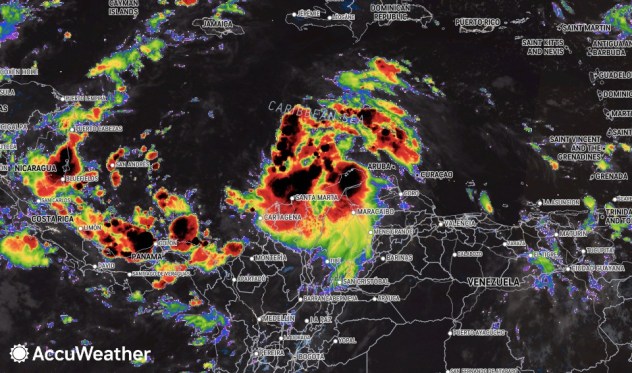 Tropical Depression 13 developed Thursday night. The depression was located along the northern coast of Colombia and was about to move into the southwestern Caribbean Sea on Friday morning, Oct. 7, 2022. (AccuWeather Enhanced RealVue™ satellite)

AccuWeather meteorologists designated the disturbance as a tropical rainstorm earlier this week due to concerns of flooding in populated areas across the southern Caribbean as well as the likelihood for the system to ramp up to a strong tropical storm and then a hurricane this weekend.

The system is likely to continue on a general westerly path through Sunday.

"Even though wind shear has dropped off in the vicinity of the depression's path, land interaction is likely to keep the storm's intensity at bay through Friday," AccuWeather Chief On-Air Meteorologist Bernie Rayno said. "But, beyond the inhibiting factors of South America, warm waters and low wind shear should allow the system to ramp up quickly upon reaching the southwestern Caribbean." 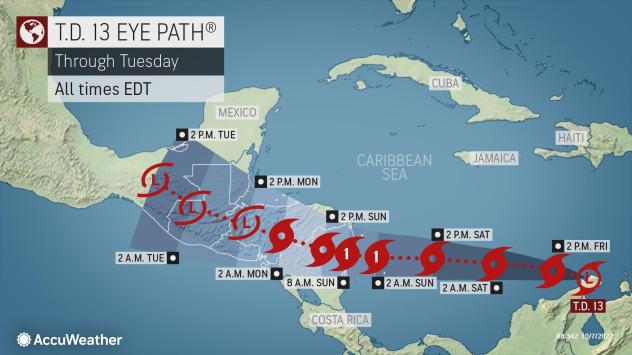 How quickly the storm will strengthen is still a question among meteorologists at this point, but with the anticipated atmospheric conditions, the development of a strong tropical storm is likely to occur, followed by an upgrade to a hurricane this weekend.

Given the steering breezes around an area of high pressure to the north, the system is likely to continue to push westward or perhaps northwestward into Central America. The high pressure area will essentially block any northward path the storm could take through the time it reaches and moves inland over Central America.

At this time Nicaragua is smack in the middle of AccuWeather's projected Eye Path®. However, some shift in the track can occur and dangers and damaging conditions from storm surge, high winds and flooding rainfall will extend well beyond the center of the storm. For this reason, people living in areas from Panama and Costa Rica to Honduras, Guatemala, Belize and southeastern Mexico should also be prepared for some of the storm's worst conditions.

Due to the tropical system’s expected impacts in Central America later this week and into next week, AccuWeather meteorologists have rated this storm as a 2 on the AccuWeather RealImpact™ Scale for Hurricanes. 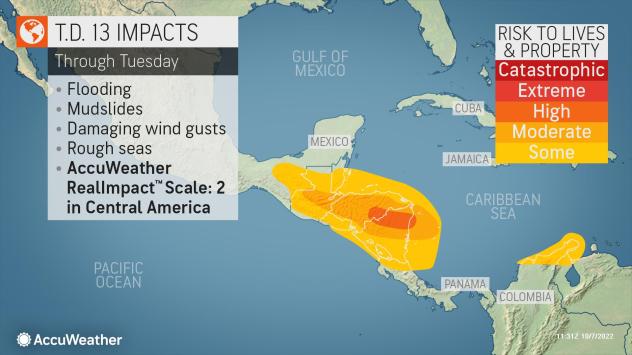 The scope and magnitude of the impacts on lives and property will depend on the intensity, size and track of the storm. With the worst conditions likely to be near and north of the center of the track, everything from flooding rain and mudslides to coastal inundation, power outages and major property damage should be expected.

Based on the landfall of a Category 1 hurricane, frequent wind gusts between 60 and 80 mph (100-130 km/h) are anticipated in northeastern Nicaragua where a StormMax™ of 110 mph (175 km/h) is most likely. Should the system become a more powerful hurricane then wind, rainfall and impacts will be substantially more extreme. 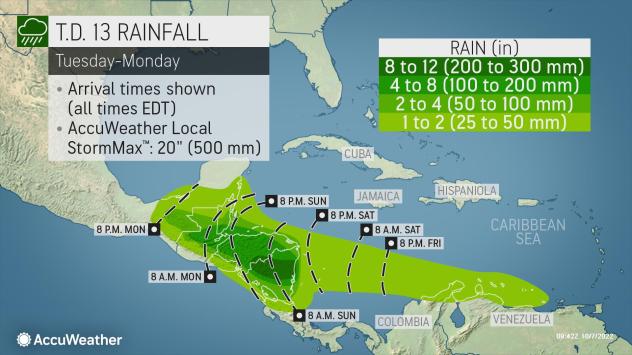 Operators of recreational and commercial fishing vessels and cruise ships are urged to avoid the path of the storm, while preventative measures to protect lives and property are strongly encouraged by forecasters at this time.

People should not necessarily assume the storm will have the same impacts as Bonnie earlier this season, which made landfall in northern Costa Rica as a tropical storm. There is the potential for this system to crash ashore with much stronger intensity and perhaps farther north than Bonnie did. As winds from a tropical storm or hurricane grow stronger, the energy and damage potential the storm can cause increases at an exponential rate.

During the heart of the hurricane season, that has been a tendency for tropical systems to undergo rapid strengthening, where the central pressure of the storm plummets 0.71 of an inch (24 millibars) in 24 hours or less. When the central pressure of the storm plunges, an increase in winds soon follows. This recently occurred in the Atlantic with hurricanes Fiona and Ian, and the same potential exists for the storm this weekend as it heads for Central America. 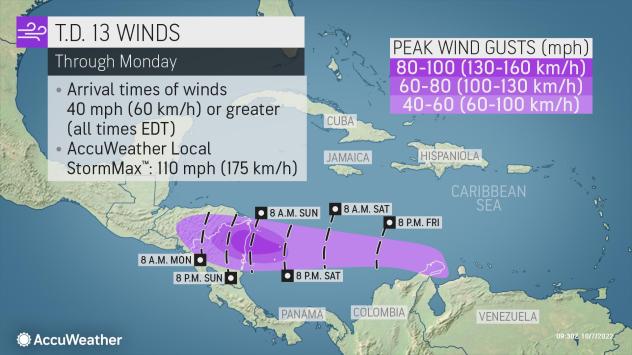 The intensity of the system will decrease once it makes landfall and moves inland. How quickly this occurs will depend on how mountainous the terrain is, forecasters say.

Since Bonnie pushed westward over a relatively narrow land and mountainous zone, it was able to maintain its circulation, emerge in the eastern Pacific Ocean and become a major hurricane. If this particular storm moves inland farther to the north over Central America, such as in Nicaragua or Honduras, where land and mountains are more extensive, it could dissolve and not reach or regenerate over the Pacific.

There is another possibility that the system could assume a more northward track after landfall, where the center could wander into the southwestern Gulf of Mexico and potentially regain some intensity. If this is the case, then the door could be open for a potential U.S. landfall later in October along the Gulf Coast.