The death toll climbed as the biggest-ever search and rescue in the history of the country continued, and President Biden said recovery will take years as he toured devastated areas on Wednesday.

One week after Hurricane Ian wreaked havoc on Florida, residents are just starting to pick up the pieces in what will be a long road to recovery. On Sanibel Island, one of the barrier islands that was devastated by Ian, residents just received the green light to return to the island to view their homes for the first time since the storm made landfall.

President Joe Biden surveyed the damage in some of the hardest-hit areas Wednesday, appearing alongside Florida Gov. Ron DeSantis. During his remarks in Fort Myers, Biden stated that the search-and-rescue effort associated with Ian is the largest effort ever in the United States, with teams having knocked on over 70,000 doors and made more than 3,800 rescues as of Wednesday.

Biden, along with first lady Jill Biden, told Florida residents hit by the storm that the couple has "had all of you in our prayers," and that the recovery process in the state would take "years" to be fully resolved.

"We have a long road ahead of us, rebuilding entire communities from the ground up," Biden said. "I want the people of Florida to know ... you have my commitment and America's commitment that we're not going to leave."

The death toll continued to climb Wednesday, with at least 125 confirmed United States fatalities blamed on Ian, CNN Newsource reported. At least 120 of those deaths occurred in Florida, CNN Newsource reported, as well as five in North Carolina, according to the governor there. In Florida, 55 deaths were reported by county officials in Lee County, which was more than in any other part of the state. The Associated Press also reported three fatalities in Cuba, where Ian struck before hitting the U.S. Ian now ranks as the 24th deadliest hurricane in U.S. history, surpassing Hurricane Agnes, a historic storm that unleashed a biblical amount of rain and led to 122 fatalities in June of 1972. 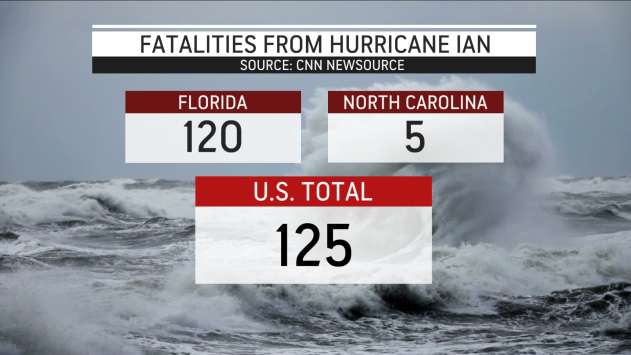 “Although the death toll from Ian is fluid and historical numbers are inexact, Ian is likely the deadliest tropical system for the state of Florida since the 1935 Labor Day Hurricane, which killed over 400 people,” AccuWeather Senior Weather Editor Jesse Ferrell said.

As the death toll continues to rise, ranking Ian as the deadliest tropical system in Florida in more than 87 years, Lee County officials have come under scrutiny about whether they provided residents with ample warning to evacuate.

As of Friday morning, around 139,000 customers were without power in Florida, a sharp drop from the peak of 2.6 million outages eight days ago, according to PowerOutage.US. In southwestern Florida, Lee, Charlotte, Sarasota and DeSoto counties -- some of the hardest-hit areas -- accounted for most of the state's power outages. Lee County had more than 95,000 customers in the dark as of Friday morning.

Florida officials note that as power is restored in many locations, schools will begin reopening. According to DeSantis's office on Wednesday, 69 districts have reopened, but many still remain closed. The Florida Department of Education (DOE) is working closely with school districts to ensure that the schools have the necessary resources to resume operations as quickly as possible. The DOE is also providing flexibility to many schools regarding attendance windows for reporting student enrollment. Schools in Charlotte and DeSoto counties are currently making plans to resume classes as early as next week.

Residents on Sanibel Island, one of the barrier islands that suffered the full force of Ian’s wrath, were allowed to return to view their homes Wednesday between the hours of 7 a.m. to 7 p.m., according to City Manager Dana Souza. Sanibel Island residents and business owners will be allowed on the island during the preset times via personal watercraft or watercraft for hire, but Souza explained that no one is to stay on the island. The ferry is still out of service.

Souza said he'd been receiving questions from people asking whether they'd be permitted to begin staying at their homes overnight. "My response is: 'No,'" Souza told reporters that residents must adhere to the curfew by staying off the island between 7 p.m. and 7 a.m.

Sanibel Fire Chief William Briscoe told CNN there are a lot of places on Sanibel Island that "are not livable."

"There are places off their foundation, and it's very dangerous out there," Briscoe said. "There are alligators running around and there are snakes all over the place."

During an update on Wednesday, officials stated that access to Sanibel Island by car will be available by the end of the month after repairs are made to the Sanibel Causeway.

Residents on Pine Island, another barrier island that endured the full force of Ian, said it looked like a war zone. The Florida Department of Transportation (FDOT) began assisting with rebuilding roads and adding a temporary bridge on Monday, completing the goal Wednesday of having drivable access to the island. FDOT's goal of completing road and bridge repairs by Saturday, Oct. 8 was met in "monumental timing," DeSantis' office said.

"We made it a priority and we didn’t just get it done – we got it done quick," DeSantis said. "I want to thank the dedicated FDOT crews for working around the clock to restore the community’s access to Pine Island."

Much like the bridge to get onto Pine Island, the Sanibel Causeway, which connects Sanibel Island to the mainland, was destroyed when Ian washed away the land on which the road was built.

"I've asked [FDOT] to work with Lee County to immediately begin work to provide temporary access and begin repairs to the Sanibel Causeway," DeSantis said on Tuesday. "Access to our barrier islands is a priority for our first responders and emergency services who have been working day and night to bring relief to all Floridians affected by Hurricane Ian."

According to the Orlando Sentinel, officials along much of the coastline ordered residents to evacuate Monday, Sept. 26, but Lee County officials "pondered" the decision, waiting to see how the forecast evolved overnight. By the next day, Lee County officials issued the evacuation notice. 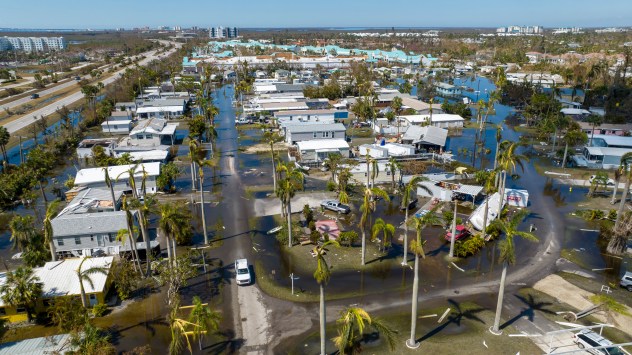 Water floods a damaged trailer park in Fort Myers, Florida, on Saturday, Oct. 1, 2022, after Hurricane Ian passed by the area. Hurricane Ian has resulted in at least 79 people confirmed dead, including 71 in Florida, as hundreds of thousands of people wait for power to be restored. (AP Photo/Steve Helber, File)

According to Lee County's evacuation strategy plan, the delay is an apparent violation and may have contributed to fatal consequences as the death toll continues to rise, the Orlando Sentinel reported.

The Fort Myers area in Lee County was recently named the sixth fastest-growing city in the country by the U.S. Census Bureau. When Hurricane Ian slammed into southwestern Florida, it put thousands of people in harm's way -- many of which had never experienced a hurricane.

The population increase over the years has led to more development in Fort Myers, which has always been a flood-prone location. The increase in urbanization has created more impervious surfaces, or surfaces that don't absorb moisture, like roads and buildings. With the city bordering the ocean and the Caloosahatchee River, now more people are at an increased risk for flooding, especially when a hurricane, like Hurricane Ian, makes a direct hit on the area.

For some residents who have been living along Florida's coast for decades, living through past hurricanes helped them prepare for Ian's wrath. "We lost our roof during Hurricane Charlie, so when we put the new roof on, it was reinforced, so that could be what saved us," Patrick Taylor, a resident of St. James City, said.

"In my lifetime, it'll never be as beautiful as it once was because it's all been ripped down," Maddie Petro, another St. James City resident, said in an interview as she returned to her home on Wednesday. "It was just getting back from Hurricane Charlie."

Florida first lady Casey DeSantis stated that the Florida Disaster Fund had raised nearly $35 million within the first five days of the fund website's activation. State figureheads have been making donations to the fund, such as Tampa Bay Buccaneers superstar Tom Brady, who called upon the "rest of the NFL family in our state" to also help recovery causes. Another donation, a $280 life-savings haul from the piggy bank of 7-year-old Dominic D’Andrea, who lives south of Chicago, drew praise on social media Tuesday.

New scenes of Ian's devastation across southwestern Florida have emerged daily since the storm struck, with each new photo and video underscoring the extreme toll on Florida's economy that will be felt in the weeks and months ahead -- a toll that could even have a ripple effect nationwide

“It's like a war zone. Everything that you used to know is gone," Alice Barrett, a Fort Myers Beach resident, told AccuWeather National Reporter Bill Wadell. "I mean, there’s very few buildings that are standing. It's hard to imagine. From this beautiful place that you love -- it's all gone. It’s just hard.”

AccuWeather Founder and CEO Dr. Joel N. Myers said the economic fallout from Ian will rival some of the worst hurricane damage in U.S. history. The total losses caused by Hurricane Ian will amount to between $180 billion and $210 billion in the U.S., Myers predicted.

“The economic impact of this storm should not be underestimated,” Myers added. “At $200 billion, that amounts to 1 percent of our national GDP, which is a significant hit on the economy and the entire country and could even be the difference between growth and recession, causing the Federal Reserve to keep from raising interest rates further for the remainder of the year.”

But for the people squarely in the storm zone, some of life’s most basic tasks might be more pressing than the scope of the economic impact on the state. Things like a hot shower that were taken for granted just a week ago aren’t so simple anymore.

Portable showers were set up outside the Fort Myers police station, and all residents had to do was bring a towel. The Fort Myers police officers supplied soap and warm water for everyone who came. Hundreds of people have already stopped by, according to AccuWeather National Reporter Emmy Victor. Laundry machines were also made available.

“Oh, it’s been six days since I took a shower, so it’s a big relief to get a shower,” Tom Demitrack, a Fort Myers resident told Victor. “We don’t expect [to have water] for another three days, so it came in pretty handy.”