Shortly after viewing hurricane-ravaged Gulf Coast communities by helicopter, Biden said the two were "in complete lockstep" in the rescue and recovery efforts. 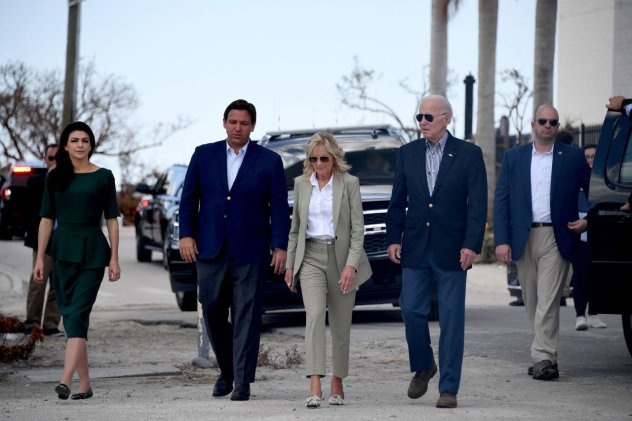 (CNN) -- President Joe Biden was in Florida Wednesday to see first-hand the destruction caused by Hurricane Ian, once again putting a spotlight on his icy relationship with Gov. Ron DeSantis, the combative Republican leader posed to potentially challenge the Democrat for the presidency in 2024.

For the time being, Biden and DeSantis have put their budding political rivalry aside, and their administrations have worked in concert since the hurricane's deadly collision with Florida's west coast. That was on display Wednesday.

Shortly after touring the hurricane-ravaged Gulf Coast communities by helicopter, Biden was greeted at Fisherman's Wharf by DeSantis and his wife, Casey, where they talked for several minutes among the wreckage.

In a joint appearance moments later, Biden and DeSantis emphasized to reporters that their two administrations, though often at odds, are working closely together on the rescue and recovery efforts.

"I'm just thankful everyone has banded together," DeSantis said, before adding: "Mr. President, welcome to Florida. We appreciate working together across various levels of government."

Biden said the cooperation has been "extraordinary," and he emphasized the ability of Americans across the country to help in times of need and urged Floridians to some day return the favor.

"We're gonna get you all through this because of the grit of all of you, but when you get it done, when you hear it happens somewhere else, remember this the United States of America," Biden said. "We're all in this together.

"We have very different political philosophies, but we've worked hand in glove," Biden said. "In dealing with this crisis, we've been in complete lockstep." 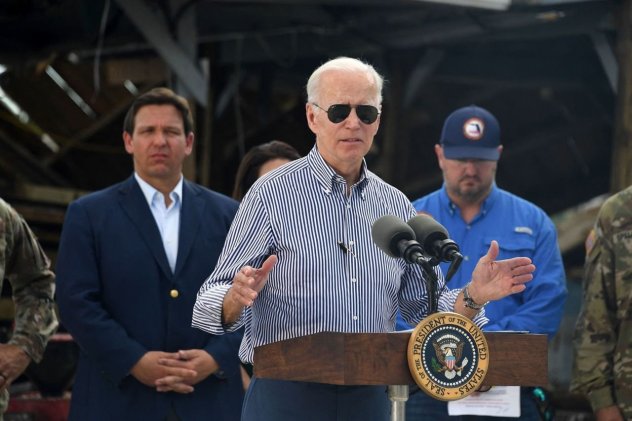 The past week marks the second time Biden and DeSantis have welcomed a brief truce in the aftermath of a tragedy. A week after a condominium tower collapsed in Surfside, Florida, last year -- killing 98 people -- Biden and DeSantis sat side-by-side in a public display of bipartisan mourning. They exchanged niceties in front of the cameras, with Biden affectionately patting DeSantis on the arm.

"We live in a nation where we can cooperate," Biden said during their joint appearance. "And it's really important."

But the public animosity between DeSantis and Biden has only intensified in the 16 months since that day, with the White House and the country's third-largest state seeming to be perpetually at odds. Biden has likened DeSantis to a schoolyard bully whose legislative agenda has targeted vulnerable LGTBQ kids. DeSantis has blamed Biden for rising inflation and earlier this year he accused the Democrat of withholding aid to tornado victims because the President "hates Florida."

A rivalry grows, with pauses for unity in face of tragedy

The tensions reached an inflection point just weeks before Ian's arrival, when DeSantis took credit for two flights carrying migrants from the border to Martha's Vineyard. Biden criticized the stunt as "unAmerican." DeSantis threatened future transports could be headed to Biden's home state of Delaware.

Asked whether Biden would raise the issue of DeSantis transporting groups of migrants to democratic cities, Jean-Pierre said there will be "plenty of time to discuss differences between the President and the governor but now is not the time."

The growing chasm in their fractured relationship has coincided with DeSantis' swift rise within his party to become the most popular Republican not named Donald Trump. His penchant for grabbing headlines and angering liberals has made DeSantis a favorite among Republican voters, some of whom want to see him challenge Biden in 2024.

As he seeks reelection next month, DeSantis has made Biden into a staple of his campaign against his Democratic opponent, Charlie Crist. The Republican Party of Florida has aired ads on DeSantis' behalf that highlight the close ties between Crist and the President, suggesting Crist would "do to Florida what Biden's done to America" and twice repeating a sound bite of Crist saying, "Thank God for Joe Biden."

But those tensions have taken a backseat -- at least for now -- to the immense cleanup left behind by the hurricane's sizeable wake. Biden has said he has spoken several times with the Florida leader and promised to "be there every step of the way." DeSantis has praised the federal government response to the state's many requests for help.

The Biden administration and DeSantis have also joined forces in pushing back against questions about the timing of evacuation orders in Lee County, where a catastrophic storm surge decimated homes and imperiled the lives of those who sheltered in place. Speaking on Fox News Sunday, FEMA Administrator Deanne Criswell defended Lee County officials, noting the unpredictable nature of this particular storm.

"As soon as the storm predictions were that it was going to impact Lee County, I know that local officials immediately put the right measures in place to make sure that they were warning citizens to get them out of harm's way," Criswell said.

At a news conference Monday, DeSantis attempted to shut down a reporter who was trying to ask the governor if Lee officials gave residents enough time to leave before Ian's arrival. Lee ordered evacuation about 24 hours before the storm made landfall, later than neighboring northern counties despite forecasts that showed the potential for dangerous storm surge along the region's coast.

DeSantis said the focus should be on "lifting people up and stop incessantly talking and trying to cast aspersions on people that were doing the best job they could with imperfect information."

Air Force One touched down early Wednesday afternoon in Fort Myers with first lady Dr. Jill Biden, who accompanied the President on Monday to survey damage to Puerto Rico caused by Hurricane Fiona.

Biden visited a community still shell-shocked by a storm that many thought was heading further north before a late wobble turned the eye toward Lee and Charlotte counties. At least 100 people died in Florida after Ian thrashed into the Gulf Coast as a massive Category 4 storm. Rescue teams continue to look for survivors as residents comb through the wreckage and search for temporary housing. More than 400,000 Florida customers remain without power, and it could be a month before electricity is restored in the hardest hit communities.

As part of a major disaster declaration for Florida, Biden on September 29 approved assistance for 13 counties that guaranteed the federal government would reimburse 100% of the cost of debris removal and other search and rescue expenses for 30 days related to Hurricane Ian. Speaking at a news conference ahead of Biden's arrival, DeSantis said many hard-hit communities could not begin debris removal until roads were cleared and officials there are now facing a time crunch.

"The clock has been ticking," DeSantis said. "Obviously they haven't been able to do a lot of debris removal when they don't have consistent access."

Before leaving for Florida, Biden amended the disaster declaration to extend the reimbursement period a further 30 days, meeting a request DeSantis had planned to make later in the day.

One community facing such hardship is Pine Island, where all bridges failed as a result of Hurricane Ian. DeSantis announced in Matlacha the opening of a temporary slow-speed bridge later Wednesday that would allow vehicle traffic to Pine Island.

During his news conference, DeSantis was complimentary of the federal response to the storm.

"Local, state coordination, FEMA — there's been less bureaucracy holding us back in this (hurricane) than probably anyone I've seen," DeSantis said.

The visit showed how two men with vastly different temperaments approach a tragedy of immeasurable devastation.

Biden has often leaned into the role of consoler-in-chief, guiding the nation through the post-vaccine period of the Covid-19 pandemic and communities across the country through more localized tragedies. In less than two years as President, he has walked through the wreckage of tornado-ravaged western Kentucky, hugged the families of victims of mass-shooting in Uvalde and Buffalo and comforted those displaced by wildfires in the West.

Speaking in Ponce, Puerto Rico, on Tuesday, Biden assured the island residents that "all of America's with you."

DeSantis, who styles himself as a hands-on leader, has commanded the state's response with a laser-like focus on the logistics of getting the state back up and running. His news conferences rarely are flourished with personal stories of suffering and loss -- a staple of Biden speeches. Instead, DeSantis is often forward-looking and matter of fact. He rattles off recovery stats and lays out in sobering detail the hurdles ahead and the state's plans to overcome the collective hardship.

Asked by CNN on Sunday to give a message to people who could not reach their loved ones living in the storm's path, DeSantis' response was typically pragmatic: He focused on the state's work with Tesla CEO Elon Musk to get the internet online in the affected communities.

"You will be able to log on," DeSantis said. "So, that'll be a comfort for a lot of people."