Nanmadol became one of the five strongest typhoons to ever make landfall in Japan over the weekend, killing at least two people as it ravaged the country with historic rainfall amounts and destructive winds.

Former Super Typhoon Nanmadol is on a path that is putting the entire country of Japan at risk for life-threatening impacts, including widespread flooding, damaging winds and coastal inundation into Tuesday. The powerful storm has already been blamed with two fatalities, according to Reuters.

AccuWeather meteorologists warned that lives and property were at risk throughout the country as the typhoon, which on Sunday had the equivalent strength of a Category 3 major hurricane (maximum sustained winds of 111-129 mph or 178-208 km/h) on the Saffir-Simpson Hurricane Wind Scale, slamed southern Japan. Nanmadol has lost wind intensity and is now classified as a strong tropical storm, according to the Japan Meteorological Agency, but continues to pose a threat to mainland Japan.

As of Sunday evening, local time, more than 8 million people have been ordered to evacuate in southern and western mainland Japan, according to NHK World.

Nanmadol made its initial landfall in southern Kyushu, the southernmost island of mainland Japan, on Sunday. At the time of landfall, the typhoon had a central pressure of at least 27.61 inches of mercury (935 millibars). This pressure reading launched Nanmadol into the history books as one of the top five strongest storms to make landfall in Japan since record-keeping began in 1951.

As it continues its trek over southern mainland Japan, Nanmadol's wind intensity will continue to lessen, but its rain impacts are expected to remain a significant threat through the early week.

The Ryukyu Islands and southern mainland Japan are in line for a tropical deluge with rainfall amounts of 8-12 inches (200-300 mm) anticipated and an AccuWeather Local StormMax™ of 36 inches (900 mm). This can trigger extensive flooding as well as mudslides in the mountainous terrain. 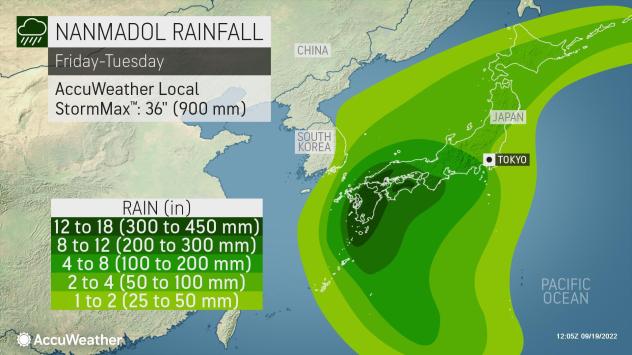 These areas that will be in closest proximity to the storm's center will face the highest risk of destructive winds.

Significant tree and power line damage are anticipated with these gusts, and structural damage can also occur. Experts strongly discourage people from venturing out during the height of the storm as flying debris can turn into deadly projectiles. Those indoors should stay away from glass windows. 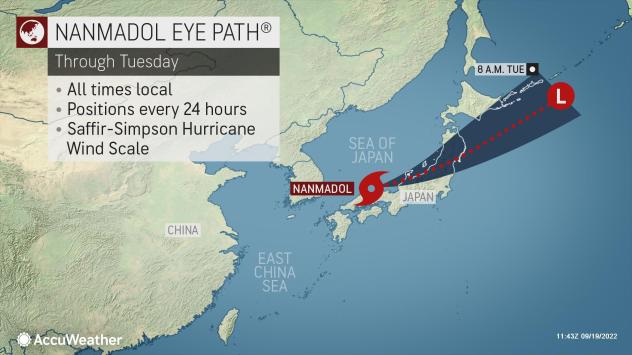 "Major flooding and potential damage to infrastructure will be likely due to these rain and wind impacts. Dangerous seas will also cause shipping problems across this part of the basin," Richards said.

Coastal locations in the Kyushu province that lie to the east of the center of the storm will be at greatest risk of facing inundation from storm surge.

Due to the anticipated damaging winds, flooding rainfall, dangerous storm surge and a number of other economic factors, Nanmadol will be a 4 on the AccuWeather RealImpact™ Scale for Tropical Cyclones in Japan. 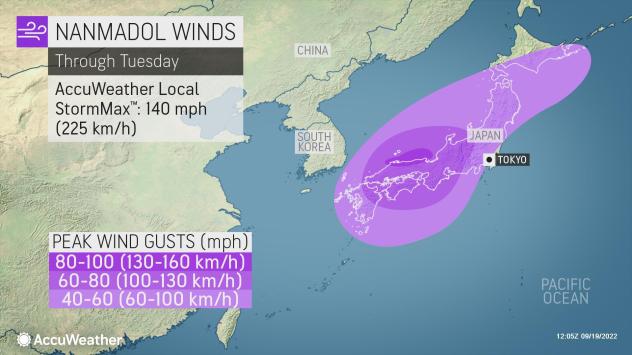 Most central and northern portions of the island can anticipate at least 2 inches (50 mm) of rain from the storm, leading to incidents of flooding and disruptions to all modes of transportation.

For a time earlier in the weekend, Nanmadol was classified as a "very strong" typhoon by the Japan Meteorological Agency, the authority for the basin. On Friday and early Saturday, the Joint Typhoon Warning Center classified it as a "super typhoon." While the storm lost this designation late Saturday, local time, it remained a powerful force of nature. Nanmadol was only the second storm this year in the basin to grab the super typhoon label. The first super typhoon of the year occurred earlier this month as Hinnamnor raged in the basin.

Nanmadol is the third blow from a tropical cyclone in less than a month for Japan. In late August into early September, Super Typhoon Hinnamnor slammed Okinawa before bringing severe impacts to South Korea. More recently, Typhoon Muifa made landfall over Japan's Ishigaki Island on Monday, Sept. 12, before it targeted China and pounded Shanghai. 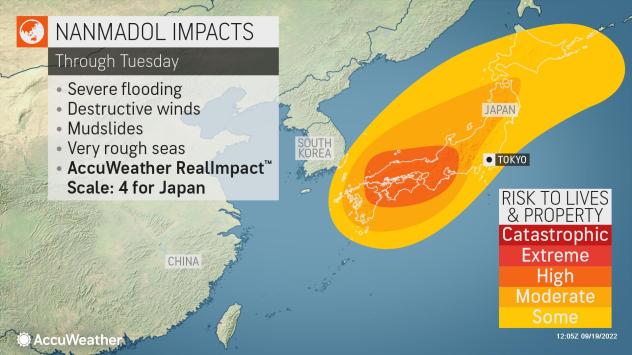 South Korea is expected to miss the worst of Nanmadol's fury, though far southeastern portions of the country can experience an uptick in rain and wind early this week from the outer reaches of the storm. Given portions of southern South Korea were already dealt a blow by a typhoon earlier this month, any rain and wind from Nanmadol can cause enhanced impacts.

AccuWeather meteorologists are keeping a close watch on the West Pacific basin in the wake of Nanmadol.

"In the longer range, additional tropical development is possible over the Philippine Sea south of Japan later this week. The exact track of any system is not clear, but Japan will need to monitor for another potential impact," Richards said.

Meanwhile, a former typhoon that roamed the waters of the West Pacific earlier last week -- Merbok -- was responsible for unleashing a flooding disaster in Alaska over the weekend.