As big cities become coronavirus hotspots, many people are choosing to leave. Even though they’ve been advised to shelter in place, some are fleeing urban areas for second homes or attempting to rent in areas that are typically vacation destinations in rural locations or at the beach. 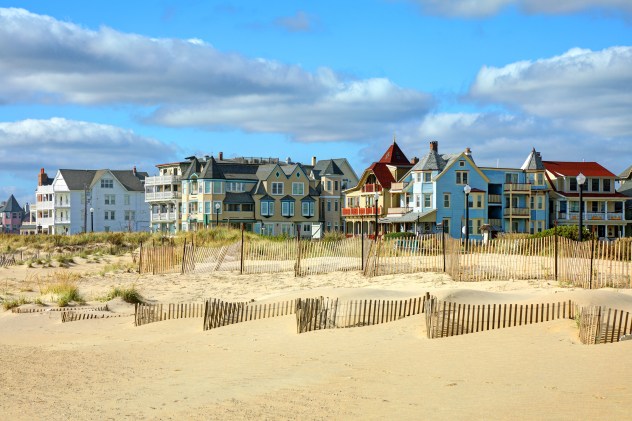 Beach along the Jersey Shore near Asbury Park, a popular summertime destination.

“So we’ve seen a lot of requests for stays from mid-March through April from people trying to escape the cities to try to shelter in place at the shore, and because of that most of the local shore governments have made the right move to ban short-term rentals at least for the month of April," he told AccuWeather.

Ocean City is just one of several Jersey Shore cities to enact a ban. In a statement released on the town's website on March 31 Mayor Jay Gillian said, "Yesterday, I joined the mayors of Cape May County in urging the elimination of all short-term rentals for the duration of the governor’s executive orders, and I noted in an update this weekend that local leaders in the real estate industry have agreed to do the same. I want to clarify that most Ocean City real estate professionals will not accept any new rental agreement with check-in before May 1."

"I urge all private owners to do the same. It will be necessary to extend this suspension of new rentals beyond April if the governor’s orders continue," Gillian said. "The city’s message to renters and visitors must be clear: Don’t come to Ocean City during the State of Emergency."

Maria Kirk owns Shore Summer Rentals and agreed that it's the right call. “Hotels are only allowed to do it and that’s only for like nurses and medical professionals so they have a place to stay, so they don’t contaminate their family," she said in an interview with AccuWeather.

Other cities around the country are also cracking down on short-term rentals. Police in the Outer Banks in North Carolina have set a checkpoint to turn back anyone, even a second-home owner, who’s not a full-time resident.

Officials at another popular island resort, North Haven, off the coast of Maine, made a similar move. Fearing resources, medical and otherwise, would be overwhelmed, four members of the North Haven Select board voted to ban outsiders, including people who own property, on March 15.

Many saw the ban as an infringement on the rights of property owners who don't live full-time on the island and the board rescinded the vote several days later. However, officials are “strongly encouraging people to remain where they are,” North Haven Town Administrator Rick Lattimer told Bangor Daily News.

"They don’t want an influx of people coming from out of town when their infrastructure is set up in the off season right now and their local hospitals are just not geared up for the type of population we would have in the summer,” Watlington told AccuWeather.

Normally, Venice Beach in Los Angeles, California, is packed, but due to the coronavirus, it was empty on April 2.

Despite the drastic actions by local officials, rural and vacation areas are seeing a massive increase in population.

Weather forecast for NYC, New Orleans, Seattle and other coronavirus hotspots
Is 6 feet enough for social distancing? Maybe not, says MIT professor
Debate grows over whether Americans should wear masks to stop COVID-19

According to Forbes, "The population of Southampton has gone from 60,000 a few weeks ago to 100,000 and rental prices in Hudson Valley rocketed from $4,000 to $18,000 per month—posing a threat to small-town hospitals that are ill-equipped to handle caring for high numbers of coronavirus patients."

In a story called "This Pandemic Is Not Your Vacation," BuzzFeed calls wealth the common denominator of a lot of the virus' spread outside major cities and notes that it isn't just coronavirus fears fueling the outrage of small town residents:

"In springtime, their supply chains, which keep the small number of grocery stores stocked with food, aren’t ramped up for peak winter or summer populations. Their broadband can’t support the demands of hundreds or thousands of cooped-up new residents, eager to stream Netflix the same way they did in more urban areas."

For now, in the absence of specific federal guidelines restricting domestic travel, local leaders of vacation hotspots and rural towns continue to draft their own policies for outside visitors.