A new study on COVID-19 suggests it can survive in the air and can live for days on certain surfaces.

The recommendation for 6 feet of separation between members of the public has been consistently shared by policymakers throughout the United States. Around the world, the World Health Organization (WHO) has urged individuals to stay at least 3 feet apart for effective social distancing.

However, Lydia Bourouiba, a Massachusetts Institute of Technology (MIT) professor, contends that those recommendations may need to pushed another 20-plus feet, a notion that was firmly rejected by one of the country's leading infectious disease specialists.

According to Bourouiba's study, which was published in the Journal of American Medical Association, coughs or sneezes that expel respiratory droplets containing pathogens can be caught up in a gaseous cloud that may carry the droplets much farther than previously thought. Her findings also suggest that this longer hang-time of the droplets could also greatly extend the lifetime of the new coronavirus contained inside them.

"Owing to the forward momentum of the cloud, pathogen-bearing droplets are propelled much farther than if they were emitted in isolation without a turbulent puff cloud trapping and carrying them forward," Bourouiba wrote. "Given various combinations of an individual patient’s physiology and environmental conditions, such as humidity and temperature, the gas cloud and its payload of pathogen-bearing droplets of all sizes can travel 23 to 27 feet (7-8 m)." 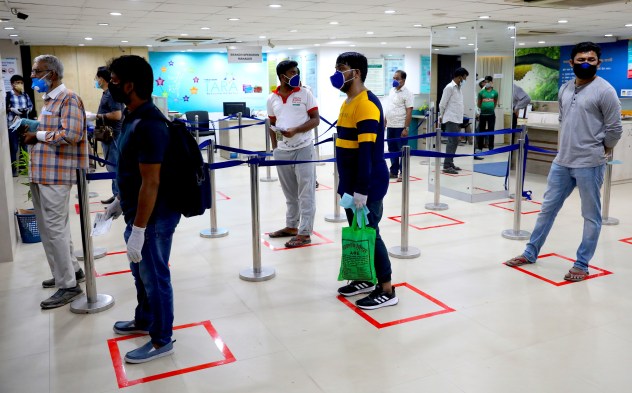 The current recommendations for 6 feet of spacing have been based on research conducted by William F. Wells, who studied tuberculosis transmission in the 1930s, according to Bourouiba. Wells found that tuberculosis droplets can be broken down into large droplets and small droplets, known as aerosols.

Bourouiba's argues that those current recommendations may not properly protect individuals from how the respiratory droplets truly behave in the air, "possibly contributing to the ineffectiveness of some procedures used to limit the spread of respiratory disease."

Bourouiba also cautioned that "no studies have directly evaluated the biophysics of droplets and gas cloud formation for patients infected with the SARS-CoV-2 virus [which causes COVID-19]," but added that "several properties of the exhaled gas cloud and respiratory transmission may apply to this pathogen."

Aerosol expert Linsey Marr, a scientist at Virginia Tech, told AccuWeather last month that the spread of respiratory droplets can be compared to how second-hand smoke behaves in various air spaces. With proper social distancing and ventilation, the impact of smoke from someone's cigarette is decreased for individuals around them.

“If viruses are released from people by breathing or talking, coughing or sneezing, they come out not as the naked virus but they come out associated in these little respiratory droplets which can then travel through the air,” Marr said. "If you imagine someone who is smoking and you’re close to them, you’re right in that puff of smoke. But if you're farther away, you’re much more dilute so that’s the idea of kind of staying away from someone, that things will get more dilute." 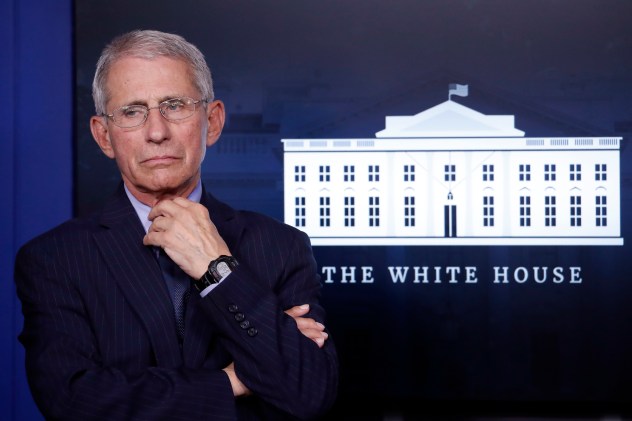 Dr. Anthony Fauci, director of the National Institute of Allergy and Infectious Diseases, listens during a briefing about the coronavirus in the James Brady Press Briefing Room of the White House, Wednesday, April 1, 2020, in Washington. (AP Photo/Alex Brandon)

One piece of evidence that Bourouiba used was the finding of virus particles in ventilation systems of hospital rooms in China. According to Bourouiba, the evidence of particles in those systems supports the gas cloud hypothesis because of how far the pathogens can travel from patients.

Bourouiba argued that her findings may influence the recommedations issued by the WHO and the Centers for Disease Control and Prevention (CDC).

"In the latest World Health Organization recommendations for COVID-19, health care personnel and other staff are advised to maintain a 3-foot (1-m) distance away from a person showing symptoms of disease, such as coughing and sneezing. The Centers for Disease Control and Prevention recommends a 6-foot (2-m) separation," Bourouiba said in her research paper. "However, these distances are based on estimates of range that have not considered the possible presence of a high-momentum cloud carrying the droplets long distances. Given the turbulent puff cloud dynamic model, recommendations for separations of 3 to 6 feet (1-2 m) may underestimate the distance, timescale, and persistence over which the cloud and its pathogenic payload travel." 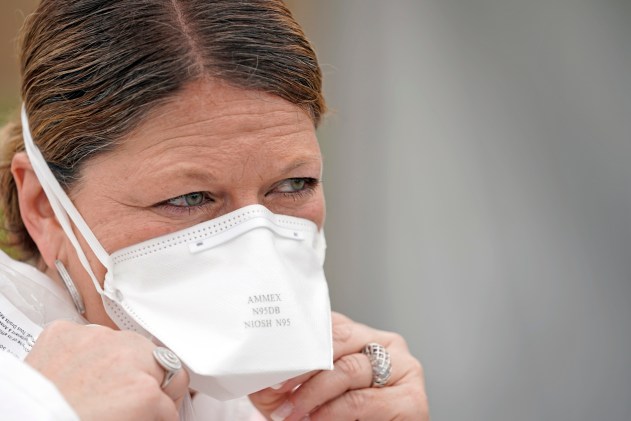 Nurse Yvette Laugere adjusts her N95 mask while working at a newly opened free Covid-19 testing site operated by United Memorial Medical Center Thursday, April 2, 2020, in Houston. The new coronavirus causes mild or moderate symptoms for most people, but for some, especially older adults and people with existing health problems, it can cause more severe illness or death. (AP Photo/David J. Phillip)

For those reasons, Bourouiba also reinforced the importance of healthcare workers wearing appropriate personal protection, even if they are farther than 6 feet away from a patient.

One expert who is not convinced of Bourouiba's analysis is Anthony Fauci, one of the nation’s top infectious disease doctors. Fauci called the published research "terribly misleading" during a White House briefing on Tuesday and said he was disturbed by the report.

"This could really be terribly misleading," Fauci said of the study. "What it was looking at the distance that droplets [travel] by — by speaking, by coughing, or sneezing. So if you go way back and go, 'Achoo!'  And go like that, you might get 27 feet.  But — so when you see somebody do that, get out of the way.  But that’s not practical."

"That is a very, very robust vigorous 'Achoo' sneeze. That’s what that is.  And that’s not what we’re talking about," Fauci added.

While the debate around the country over whether Americans should wear masks or not continues, Bourouiba's findings may point to "yes," especially if the virus can be transmitted by simply breathing or talking, as other studies have suggested.

However, the CDC has yet to reform its guidelines on mask-wearing, a stance reiterated by Arleen Porcell, a CDC press officer, in an email to AccuWeather on Thursday.

"CDC has not changed its guidance on this topic," she wrote. "CDC is always evaluating emerging scientific evidence and making guidance updates as needed to keep the American public safe. An official statement will be issued at the appropriate time."

While the CDC has not changed its guidelines, studies like Bourouiba's and the openness to reconsider past recommendations, as President Donald Trump and U.S. Surgeon General Jerome Adams have pointed to in recent days, may change the way Americans live in the coming days.

“The idea of getting a much more broad, community-wide use of masks outside of the health-care setting is under very active discussion at the task force,” Fauci told CNN. “The CDC group is looking at that very carefully.”