How does the new coronavirus spread? Think of second-hand smoke

How long can coronavirus last in the air?

A new study on COVID-19 suggests it can survive in the air and can live for days on certain surfaces.

An aerosol is a tiny air particle, thinner even than the diameter of a strand of hair. And when an aerosol contains viruses such as SARS-CoV-2, which causes the disease COVID-19, it can be a deadly carrier at the center of a dangerous outbreak.

When breathed, sneezed or coughed out, aerosols containing SARS-CoV-2 have been proven to linger in the air for several hours, according to a study published by The New England Journal of Medicine. The study also determined how long the virus can live on certain surfaces, such as plastic and steel. 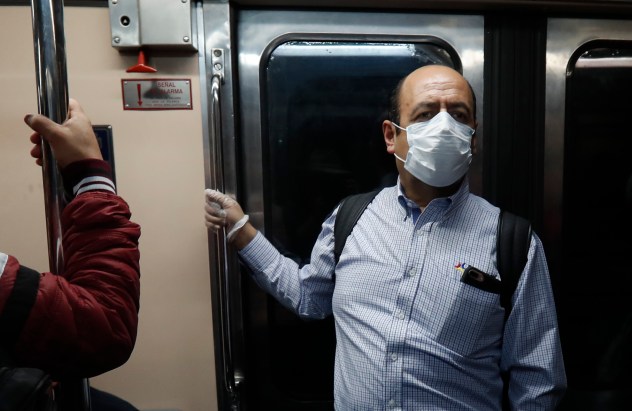 Dr. Linsey Marr, an aerosol scientist at Virginia Tech, explained to AccuWeather's Monica Danielle how aerosols containing viruses like SARS-CoV-2 are spread. She said that the study better explains how infectious the current coronavirus is and how it behaves both in the air and on surfaces.

“If viruses are released from people by breathing or talking, coughing or sneezing, they come out not as the naked virus but they come out associated in these little respiratory droplets which can then travel through the air,” Marr said. People can also become infected if they touch a surface with the virus on it and then touch their eyes, nose or mouth.

In the study, researchers from the National Institutes of Health (NIH), Centers for Disease Control, UCLA and Princeton University found that the coronavirus was detectable in aerosols for up to three hours after emission. They also found the virus detectable on copper for up to four hours, on cardboard for up to 24 hours and on plastic and stainless steel for up to two or three days. 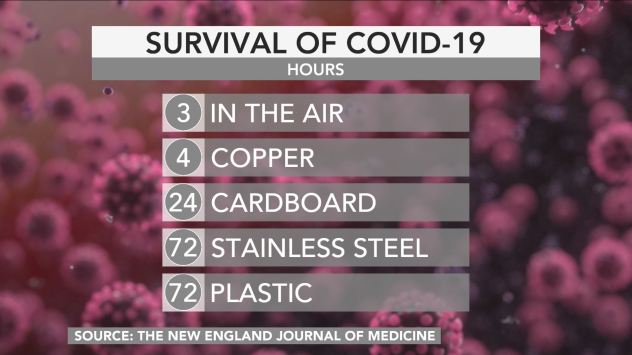 The findings of the study are crucial for understanding the hidden transmission of the virus, through aerosols in the air and on objects, and researchers noted one key difference from previous coronaviruses is that people are spreading COVID-19 without experiencing symptoms or prior to recognizing symptoms. The NIH pointed out that this finding “would make disease control measures that were effective against SARS-CoV-1 less effective against its successor.”

“SARS-CoV-1 was eradicated by intensive contact tracing and case isolation measures and no cases have been detected since 2004,” the NIH wrote in a press release last week. “SARS-CoV-1 is the human coronavirus most closely related to SARS-CoV-2. In the stability study, the two viruses behaved similarly, which unfortunately fails to explain why COVID-19 has become a much larger outbreak.”

SARS-CoV-1, better known as just SARS, was an epidemic that also emerged from China in 2002. The NIH added that unlike SARS, COVID-19 has been more commonly transmitted in community settings rather than in health care settings.

Marr said the findings of the study reaffirm the importance of social distancing and can also help individuals better protect themselves by taking simple sanitation measures, including washing hands often for at least 20 seconds. 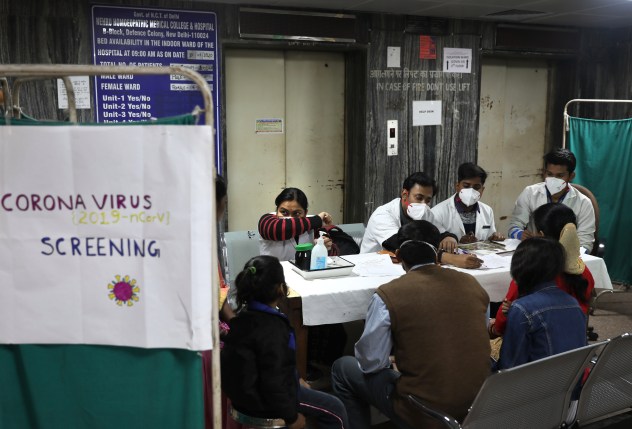 Patients watch a doctor demonstrate how to cover the face while sneezing in an area set aside for possible COVID-19 cases at a free screening camp at a government-run homeopathic hospital in New Delhi, India, Friday, March 13, 2020. The camp is part of the government's surveillance for fever and other symptoms related to the coronavirus. (AP Photo/Manish Swarup)

Marr explained that several factors can influence how long viruses like SARS-CoV-2, can live in the air, factors such as the size of droplets and outside forces.

"The large ones, of course, settle quickly onto surfaces, the floor, things -- and the smaller ones can stay afloat for a while," Marr said, adding that movement of the air and ventilation can also play a role.

“It also depends on the wind or the ventilation conditions in the room," she continued. "If the air is kind of keeping them stirred up or if maybe the fan is blowing them down to the floor."

Marr said that for the average person, "The risk goes down with more ventilation in the room because then you’re diluting the virus out and removing in the outdoors. So I consider the virus to remain infectious and potentially hazardous as long as it’s physically floating around in the room.”

An easy analogy, according to Marr, is with second-hand smoke. With a safe distance and proper ventilation, the impact of somebody else's smoking is decreased for individuals around them. Similarly, the risk of COVID-19 from aerosol particles is also decreased with similar measures.

Both Marr and the NIH say that's a crucial argument for understanding the importance of social distancing since droplets will be much more concentrated close to someone who is infected.

"If you imagine someone who is smoking and you’re close to them, you’re right in that puff of smoke," Marr said. "But if you're farther away, you’re much more dilute so that’s the idea of kind of staying away from someone, that things will get more dilute. But of course, if you’re in a small, confined space then those aerosols can be more concentrated and I think there’s a higher risk in that system."

Other weather elements such as higher temperatures and humidity have been linked to a reduction in the spread of COVID-19 in recent studies, similar to what researchers have found in other respiratory illnesses like the flu in the past.

This virus is so new to humans that additional research is needed to understand exactly how these weather conditions will influence the spread of the disease in the warmer summer months, Marr explained.

"I think as the weather warms up and our humidity indoors gets higher, we’ll have to see. We can hope that transmission might slow down but I don’t think we can count on it," Marr said.