Toadzilla, a giant cane toad found in Australia, may be a record-breaker

Park rangers, who stumbled upon the creature in Queensland while conducting track work, were shocked to find a "monster" toad.

The monster-sized cane toad weighed nearly 6 pounds, and wildlife experts believe it could be the largest toad on record.

(CNN) -- Rangers in northeastern Australia were astonished when they stumbled across what may be the largest toad on record, weighing in at nearly 6 pounds.

Dubbed "Toadzilla" by the rangers, the 2.7-kilogram (5.9-pound) amphibian was found in Conway National Park in Queensland last week when park officials were conducting track work, the state's Department of Environment and Science said on social media.

In a tweet on Thursday, the department said rangers "were shocked to find a monster cane toad." 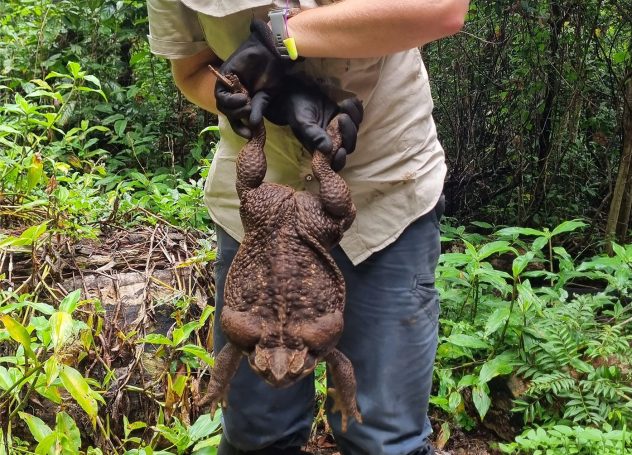 Ranger Kylee Gray said team came across the mammoth creature when she left their vehicle as they stopped to let a snake slither across the track.

"I reached down and grabbed the cane toad and couldn't believe how big and heavy it was," Gray said in a statement from the department on Friday.

"We dubbed it Toadzilla," Gray said, adding that they worked quickly to remove it from the wild because a cane toad of its size will eat "anything it can fit into its mouth."

Believed to be female, as they typically grow larger than their male counterparts, the toad was taken back to the rangers' base, where she was weighed. Rangers say Toadzilla could set a new record.

Toadzilla has since been "euthanised due to the environmental damage they cause," the department added in its tweet. 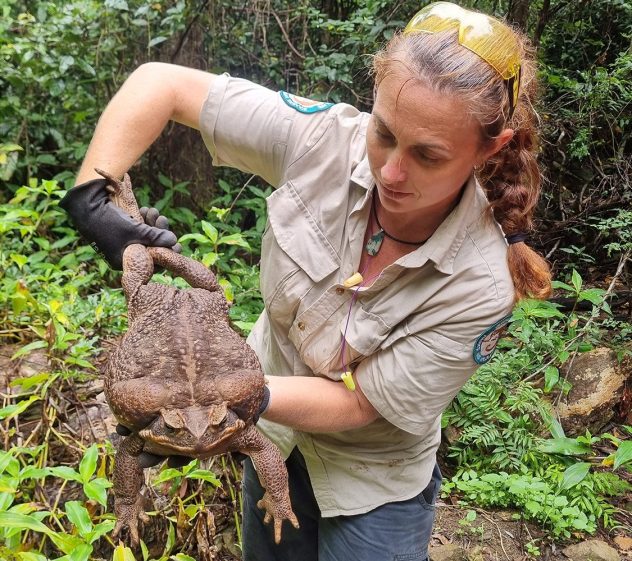 The Department of Environment and Science told CNN on Friday that she has been sent to the Queensland Museum for further analysis.

Native to South America and mainland Central America, cane toads were first introduced to Australia in 1935 as a biological control against cane beetles.

Instead, they became an invasive -- and noxious -- species that has "had a devastating impact on our native wildlife," the department added. They typically colonize a wide range of habitats, though not widely spread through rainforests, but will penetrate these areas along roads and walking tracks, according to the department.