Blizzard-like conditions could develop across the Upper Midwest including in parts of Minnesota, Iowa and Wisconsin.

A storm that is unleashing flooding rains in the already soggy Southern states collided with the coldest air of the season on its northern side Wednesday, triggering a major snowstorm that brought whiteout conditions across portions of the Plains.

The storm moved northeastward and brought drenching rain the Ohio River Valley on Wednesday. Cold air typical of February was in place across the central Plains and the Upper Midwest -- and there was enough cold air to allow snow to mix in across several states. 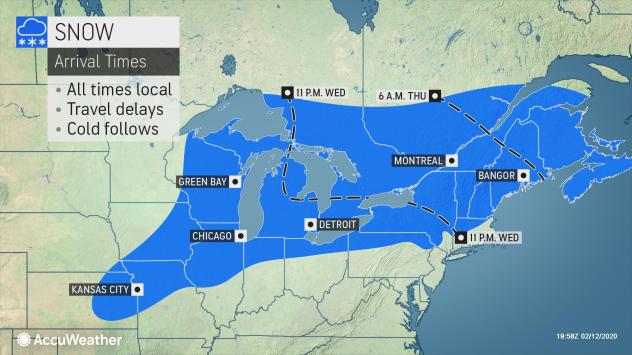 Through the life of the storm, wintry precipitation could potentially impact a 1,500-mile stretch from eastern Kansas to eastern Maine from Wednesday through Thursday.

Blizzard warnings and wind chill advisories were in effect across the eastern Dakotas and southwestern Minnesota early Wednesday. 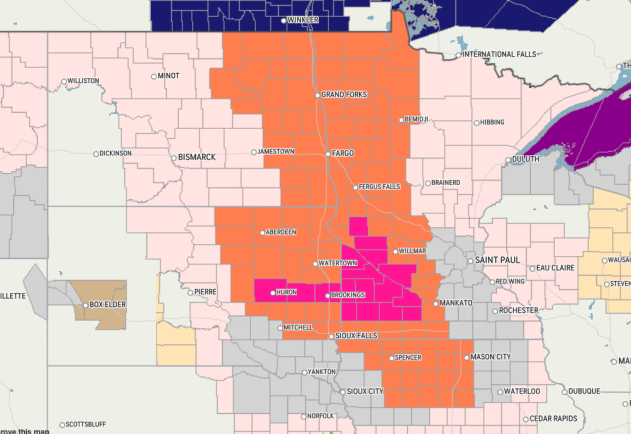 The storm unleashed more than a foot of snow across higher elevations in Colorado and New Mexico and 3-5 inches in the Texas Panhandle, snarling travel across parts of the region before moving on to the east. Snow totals of up to 3 inches have already been reported across central and eastern Kansas, according to the National Weather Service (NWS). 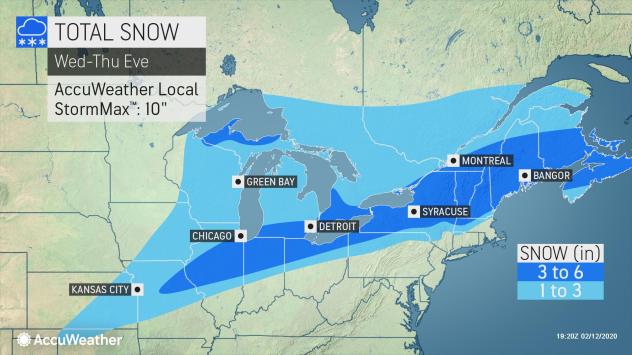 The brunt of the storm was focusing on areas farther north, where winds whipped up blizzard conditions across portions of the Dakotas. "Near impossible" travel conditions were reported across parts of North Dakota Wednesday morning, according to the NWS as blizzard conditions produced near zero visibility and shut down a stretch of Interstate 29 from Fargo to the Canadian border.

Do not travel advisories were in effect across parts of eastern North Dakota as well as eastern South Dakota.

The North Dakota Highway Patrol said plows were unable to clear the roads due to the limited visibility. In some cases, vehicles lost sight of the road and had driven into a ditch along I-29.

"Conditions are dangerous," the Highway Patrol said. The agency shared a video of blizzard conditions around Fargo, with worse conditions reportedly outside of the town. 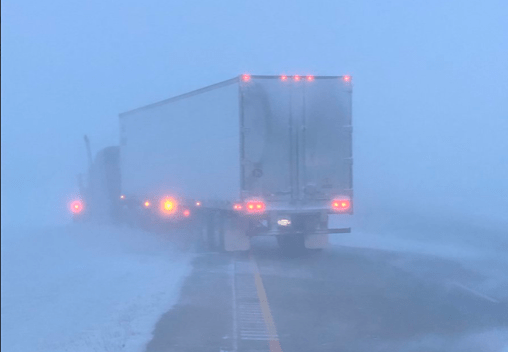 A truck drove off the side of the road in limited visibility Wednesday morning near Fargo, North Dakota. (Photo/North Dakota Highway Patrol)

Travel was not advised in the northwestern part of the state and stretches of several roadways including U.S. Highway 2 and State Highway 200 were forced to close.

Even though blizzard conditions are not anticipated farther south and east, snow accumulations of 3-6 inches are expected for Midwest communities just east of Kansas City, Missouri and just north of St. Louis to Chicago, Detroit and Cleveland. But, even in Kansas City, St. Louis and Indianapolis enough snow will fall from the storm to create slippery travel.

Travelers along interstates 35, 55, 57, 88, 90 and 94 may all experience snow-covered roads Wednesday and Wednesday night, and AccuWeather meteorologists warn that drifting snow could cause lingering issues on roadways Thursday as the storm pulls away.

As the storm pushes into the Northeast Wednesday night and Thursday, winds are expected to weaken, which should limit the blowing and drifting of snow across the region. 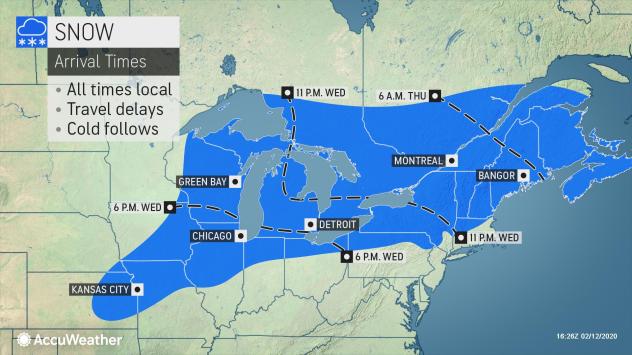 And, the exact track of the storm as it moves into the Northeast will determine whether enough cold air is in place to bring widespread snow to the region. It may be too warm in some of the major metropolitan areas like Philadelphia, New York and Boston for snow to fall -- a factor that has been causing these cities to miss out on snow during most storms this winter.

Philadelphia has recorded only 2% of its normal snowfall for the season to date, while New York City has measured 32% of average and Boston has seen 56% of the normal snowfall. 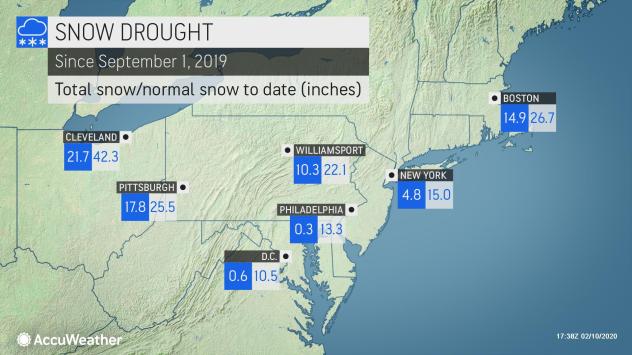 Instead, the bull's-eye of heavier snow will stretch from southern Michigan and into interior portions New York state and New England.

"With the storm moving into this area Wednesday night, the likelihood for accumulating snow is higher," Edwards said, adding that more snowfall is likely to pile up at night due to marginal temperatures. 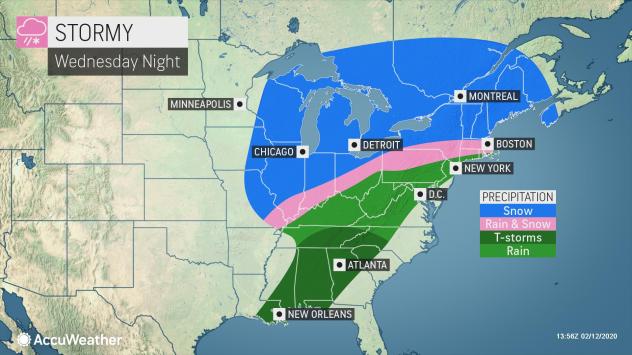 A swath of 3 to 6 inches of snow is forecast for this region, with an AccuWeather Local StormMax™️ of 10 inches most likely in the high elevations of northern New England.

The timing of the snow could cause difficult conditions during commutes in portions of the Midwest and Northeast, both Wednesday evening and again on Thursday morning. The heaviest snow could force decision-makers to close schools or call early dismissals and delays. 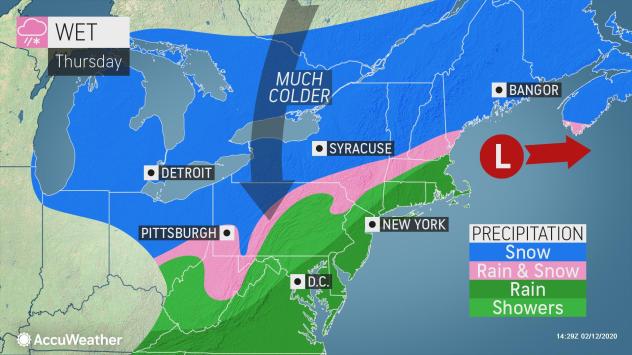 Coldest air of the season takes aim for Plains, East this week
Storm Ciara fast-tracks plane flying from JFK to Heathrow in under 5 hours, breaks record
Devastating snowstorm that hit DC 98 years ago still stands as city’s worst ever

Behind storm, frigid air will filter into the U.S., first in the northern Plains, then across much of the Eastern Seaboard by Friday.

AccuWeather RealFeel® Temperatures will dive down as low as minus 25 F in the Upper Midwest on Thursday morning, and into the single digits across the interior Northeast on Friday morning.

The speed at which cold air rushes in behind the storm will play a role in how far south snow reaches. At the very least, lingering wet areas across the Tennessee Valley may rapidly freeze up following heavy rain and flooding. 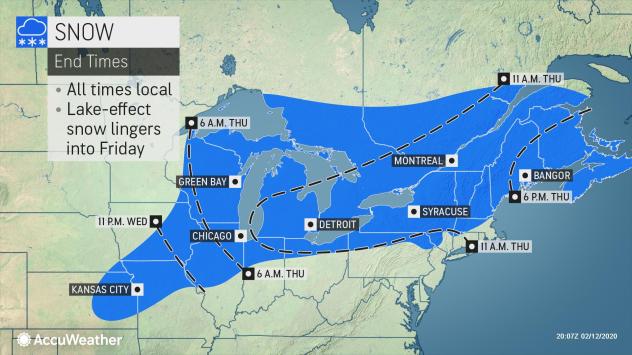 Additionally, the cold air rushing across the Great Lakes will allow for some lake-effect snow to develop behind the storm as it departs the Northeast Thursday morning. Snow showers will likely continue downwind of lakes Michigan, Erie and Ontario into early Friday.

Typically by this time of in the season there has been enough cold air to freeze over a larger portion of the Great Lakes, restricting the amount of lake-effect snow that is possible. 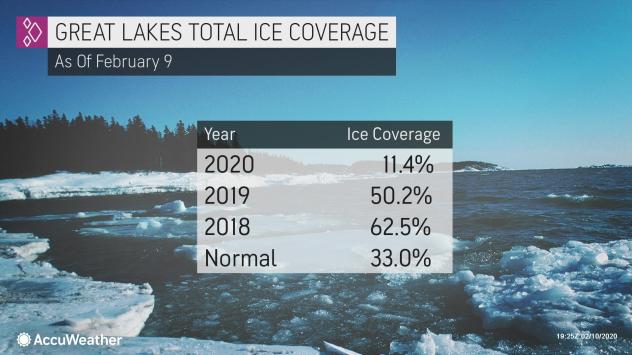 The lack of snow ice this year is at least partially attributed to the lack of long-duration cold over the region this winter.

Temperatures have ranged from 6 to 9 degrees above normal from Chicago to Boston since the start of 2020, during what is typically the coldest and snowiest part of winter.