A potent storm brought snow and ice to parts of the Southeast and mid-Atlantic on Friday and Friday night, affecting a narrow zone around the Atlantic coast this time. Amid airport issues and closed roads, major travel disruptions along portions of the Interstates 85 and 95 corridors of Virginia and the Carolinas are expected to continue on Saturday morning.

"It's already below freezing, it's already pure freezing rain, so it looks like this is a textbook event to overperform in terms of the ice accumulation," Extreme Meteorologist Reed Timmer said Friday evening, reporting from Wrightsville Beach, North Carolina. "Stay indoors. Stay off the roads through tomorrow morning. It's about to get nasty across the coastal Carolinas."

"Snow can be seen accumulating on the tarmac with temps in the 20s," he said in a tweet.

Winter weather advisories, winter storm and ice warnings were in effect for dozens of counties from South Carolina to Virginia due to the storm. The ice storm warning issued by the National Weather Service at Morehead City, North Carolina, was the first since records began in 2005, according to the Iowa Environmental Mesonet, a branch of Iowa State University that archives weather data. 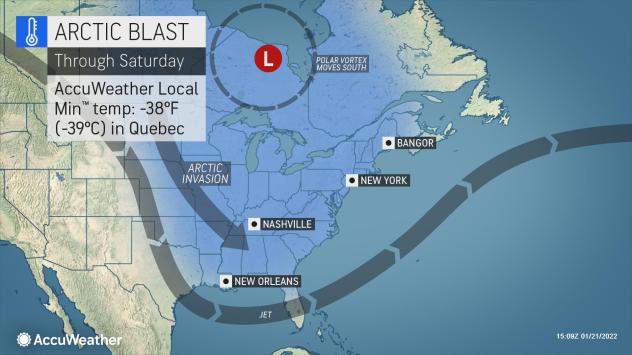 “A deep, round dip in the jet stream associated with a lobe of the polar vortex, centered over Hudson Bay, Canada, was in the driver’s seat,” Rayno said.

Dry Arctic air kept the storm and its wintry contents confined to central and eastern areas of the Carolinas and Georgia, southeastern Virginia, part of the eastern shore of Maryland, southern Delaware and the New Jersey cape.

Light snowfall began around 3 p.m. EST, local time, at Virginia Beach on Friday, AccuWeather National Reporter Jillian Angeline reported, though snowfall grew heavier as the hours passed. Sticking to surfaces, it created "downright dangerous" roadway conditions, Angeline said. While on the road, a sedan fish-tailed into traffic toward her car before the driver was able to regain control. There was no collision from the incident and no reported injuries. As of Saturday morning, Virginia Beach, Virginia, had accumulated 5.5 inches of snow.

The heart of the storm's snow focused on a region spanning from northeastern North Carolina to southeastern Virginia and the Atlantic beaches of Maryland. As snow continued to fall on Saturday morning, Norfolk, Virginia, reported about 4 inches of snow and an area southwest of Elizabeth City, North Carolina, received about 3 inches of snow. 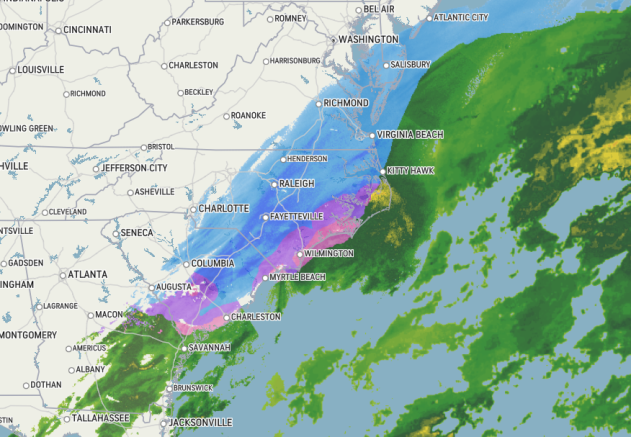 Norfolk has been the target of big snowstorms in the past. Most recently, Norfolk measured 10.3 inches of snow from Jan. 4-5, 2018. Prior to that, a storm from Dec. 26-27, 2010, buried the city under 14.2 inches of snow. Norfolk typically picks up about 6 inches of snow on average during the entire winter, and the city may receive all or most of that from this one storm. Prior to Thursday, a storm on Jan. 3 brought the only measurable snowfall this season, a mere 0.4 of an inch.

Farther west, the storm's compact nature limited snowfall in Charlotte, North Carolina, from Friday to Friday night, with the greatest amounts to the east of that metro area and significantly less snowfall likely to the west. About 2.5 inches of snow fell in Mint Hill, North Carolina, close to Charlotte, by the time the storm concluded.

Even a small amount of snow that initially makes roads wet will be subject to a freeze-up, and AccuWeather forecasters advise that slippery, dangerous travel is likely to linger on Saturday. The storm last weekend brought 1-2 inches of snow, sleet and freezing rain to Charlotte.

"There's already some freezing rain accumulation on the palmetto trees here right along the shoreline of the Atlantic Ocean," Timmer said, adding that ice accumulation could exceed a third of an inch across coastal northeastern South Carolina and along eastern North Carolina.

The number of power outages across the Carolinas began to tick upwards throughout Friday. Over 1,500 customers in North Carolina and nearly another 3,000 in South Carolina found themselves without power by 10 p.m. EST, according to PowerOutage.US. 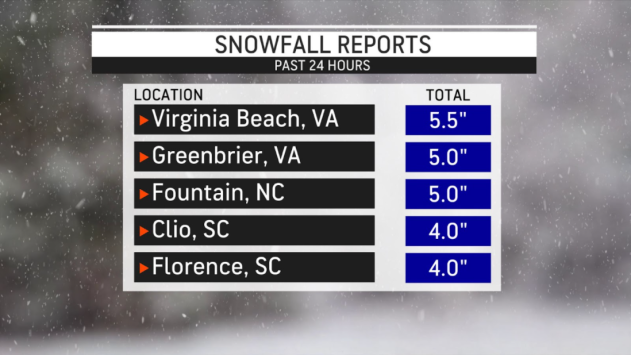 Atlanta had some snow mixing in with rain for a couple of hours on Friday evening, but nothing measurable. The longest-ever streak with no snow in Atlanta’s history stands as 1,477 days, beginning on Feb. 2, 1948, and ending on Feb. 25, 1952, according to the National Weather Service. The storm from this past weekend brought 0.3 inches of snowfall to downtown Atlanta, while Greenville was buried under 6-7 inches of snow.

On the storm's northern side, areas in eastern Virginia had snowfall trail off drastically from south to north with Richmond only receiving about 4 hours of snowfall, while some suburbs south of Washington, D.C., didn't receive a flake, AccuWeather Meteorologist Randy Adkins said, adding that the same is generally true for areas west of Raleigh, North Carolina, where snowfall trailed off exponentially, though areas to the west and north of the city received about 3 inches of snow.

Snow in parts of the Carolinas and southeastern Virginia will pose a problem for travel along portions of I-85 and I-95 in areas of the country ill-equipped to handle winter's worst, but a build-up of ice is a major concern farther south from southeastern North Carolina to parts of the South Carolina Midlands and Low Country. Along portions of I-20, I-26, I-40 and I-95, anywhere from 0.25 to 0.50 of an inch of ice can accrue on elevated surfaces such as vehicles, decks, trees and power lines.

"Warm waters surrounding the [coastal] region may mitigate the ice storm somewhat, but motorists should be prepared for slippery conditions, especially on elevated surfaces such as bridges, overpasses and causeways," AccuWeather Senior Meteorologist Brett Anderson said.

At 11pm, we measured 0.25" of ice accretion at the office in Newport, NC 🥶 Freezing rain is still falling... pic.twitter.com/in5duXZqMX

Cities at risk for a significant build-up of ice that can lead to sporadic to widespread power outages include Fayetteville, Wilmington and Jacksonville, North Carolina, as well as Florence, Myrtle Beach, Columbia and Charleston, South Carolina.

At 11 p.m. Friday, the National Weather Service office at Newport, North Carolina, measured 0.25 of an inch of ice as freezing rain continued to fall. The NWS at Charleston, South Carolina, also reported a light glaze of ice on trees and cars around 11:30 p.m.

Ice storms along the Carolina coasts are not common but not all that rare either. Since the late 1940s, there have been nearly 50 significant ice storms in Wilmington, according to the National Weather Service. The last major ice storm to hit the coastal city occurred in late February 2015 when a storm on Feb. 24 produced 0.40 of an inch. Slightly more than a year before that, on Feb. 11-12, 2014, a storm brought a glaze of 0.56 of an inch with parts of eastern North Carolina encased with 1 inch to 1.5 inches of ice.

A potential saving grace from the worst impacts of the storm could occur if conditions allow precipitation to fall in the form of sleet for a time, shortening the duration of freezing rain, which is the more formidable hazard. 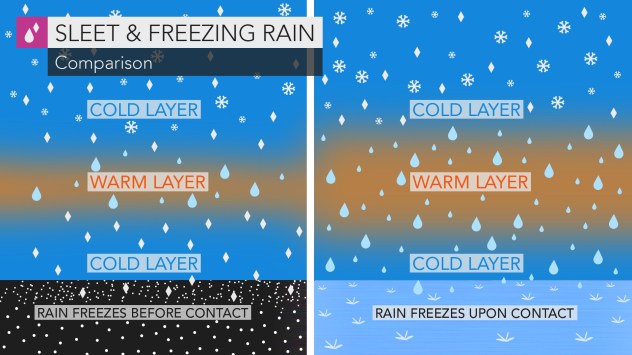 While sleet can remove heat from roads and sidewalks faster than cold rain or snow, it tends to bounce off trees, rather than adhere to them. It is the weight of freezing rain and clinging snow that tends to break tree limbs and potentially lead to power outages.

A bit of ice is also expected in east-central Georgia for a time on Friday as well, but the main concern in cities such as Macon, Augusta and Savannah in the Peachtree State will be from falling temperatures that can cause wet areas to freeze on Saturday morning.

As of Saturday morning, over 10,000 were without power across North Carolina, according to PowerOutage.US.

The quick blast of winter weather will be a sharp turnaround in places that have been experiencing balmy weather in recent days.

Police arrest ‘Elsa’ as prime suspect behind winter storm
45 years ago: The day it snowed in Miami
Frigid cold, more rounds of snow coming to Midwest and East