While portions of the Northwest will finally see relief from months of soaking storms this week, another portion of the region will see its record-setting autumn only get wetter

Heavy rain caused the Nooksack River to spill beyond its banks in Washington on Nov. 29, forcing residents to shelter in place while most roads in and out of the city were closed.

After months with atmospheric rivers and a seemingly never-ending train of storms slamming the Pacific Northwest this autumn, hope might be just around the corner in December. Unfortunately, it will not be for all.

Yet another rain-filled storm is in store for the area, but forecasters say it will likely steer northward and soak British Columbia, Canada, sparing the northwestern United States – an appreciated reprieve on the heels of the wettest autumn on record for many locations in the region.

As November came to a close, the Seattle-Tacoma Airport has recorded its wettest fall season on record, with 19.04 inches (484 mm) of precipitation from September through November. Vancouver, British Columbia, also had its wettest fall on record and surpassed Seattle's total with 20.88 inches (530 mm) of precipitation since the beginning of September, over twice its average. 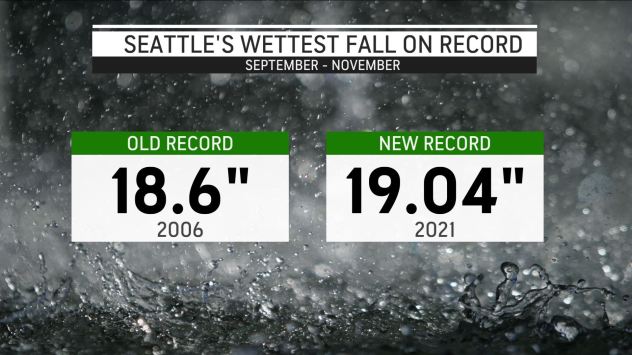 Topping them all was Abbotsford, British Columbia, which reported a whopping 32.94 inches (837 mm) of precipitation since Sept. 1 and was badly damaged by flooding and landslides earlier this month.

Unlike the northwestern U.S., those same areas of western Canada are certainly not out of the woods yet.

AccuWeather forecasters predict areas to the south of the United States-Canada border could have some relief in the coming days, with worse news for their neighbors to the north. 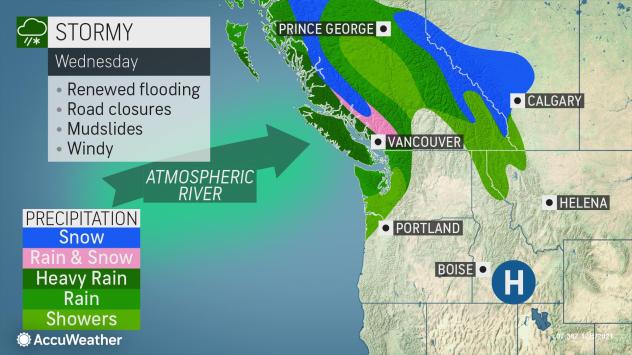 "The last of a series of atmospheric river events will finally lift north of Washington state on Wednesday, but heavy rain will likely continue in British Columbia into early Thursday morning," said AccuWeather Meteorologist Thomas Geiger.

Spotty showers and rain chances can linger in the northwestern U.S. this week, but they will be nothing like the flooding rain the region has seen recently. While there can be a break in British Columbia as well, forecasters are also watching a portion of the coastal province for yet another storm that could cause major flooding and heavy snow next week.

"Early next week, a dip in the jet stream will push into the Northwest," said AccuWeather Lead Long-Range Meteorologist Paul Pastelok.

In the past few months, such relentless rainfall with infrequent breaks in between has had catastrophic effects.

"Severe rainfall and has led to flooding and mudslides, which washed out highways and bridges," said Geiger, explaining that Vancouver was essentially cut off from the rest of Canada due to the storms decimating Highway 1 as well as railways. 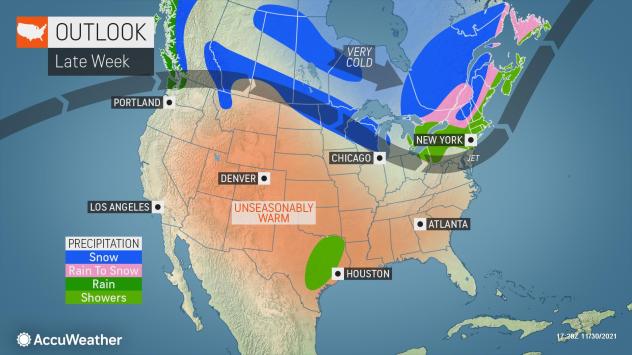 Despite the expected rainfall amounts only being a couple of inches with each burst, the impacts could be devastating after the persistent storms that have haunted the region throughout autumn. The deluge is anticipated to primarily last from Tuesday, Dec. 7 to Wednesday, Dec. 8, but forecasters warn there could also be some rainfall the Sunday and Monday before as well. Flooding potential stretches farther south than even Portland, which has been missed by the recent storms.

Geiger explains that these rainstorms are largely the product of atmospheric rivers.

"Atmospheric rivers can be thought of like narrow rivers in the sky that transport large amounts of moisture/water vapor over a long distance," Geiger said, explaining that once the rivers arrive over land, the moisture condenses and falls as rain or snow, often producing weeks' worth of rain in a few days.

By the middle of December, AccuWeather's long-range forecasting team predicts a strong storm could move from the Gulf of Alaska southward, leading to heavier rain and snow farther south.

"There will be a heightened risk for flooding and mudslides in the Northwest," said Pastelok.