A winter storm dropped several inches of snow in Ames, Iowa, on Jan. 25, covering roads and cars in fresh powder.

AccuWeather forecasters are keeping a close eye on the storm that began pummeling California on Tuesday because, as it moves inland, it will trek eastward and is bound to meet up with frigid air. Forecasters expect it to wreak havoc over the weekend in parts of the heartland that saw record snowfall, and then into the early part of next week across the mid-Atlantic and Northeast.

A critical factor in the precipitation type associated with this storm will be cold air that is expected to be in place ahead of the storm system's arrival.

"There will likely be a large zone of cold air ahead of the storm across the Midwest and Northeast," AccuWeather Forecasting Manager Dan DePodwin said. 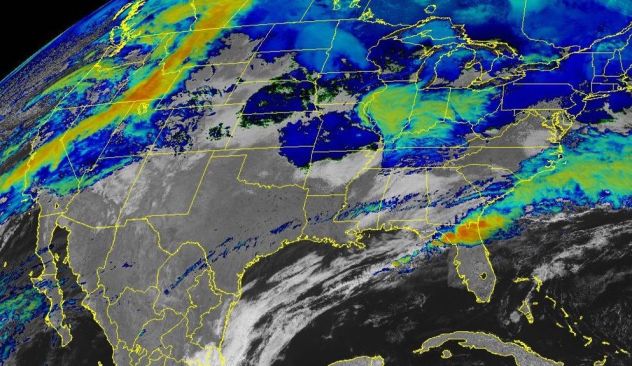 A monster storm pounded the West Coast on Wednesday, Jan. 27, 2020. It will charge across the country, restrengthen and dump snow and ice on the Midwest and Northeast. (NOAA / GOES-EAST)

In fact, the weather in the Northeast will be downright cold and nasty from Friday to Saturday and, with high temperatures forecast to top out in the mid- to upper 20s in New York City, for example, could rival some of the lowest temperatures of the season so far that were achieved just last weekend.

"This extensive cold air may help keep the precipitation as snow in many places, especially away from the immediate Atlantic coast," DePodwin said of the forecast for the weekend into early next week.

This wedge of cold air is a concern in terms of snow and ice as far south as the Piedmont areas of the Carolinas from late this weekend to early next week. 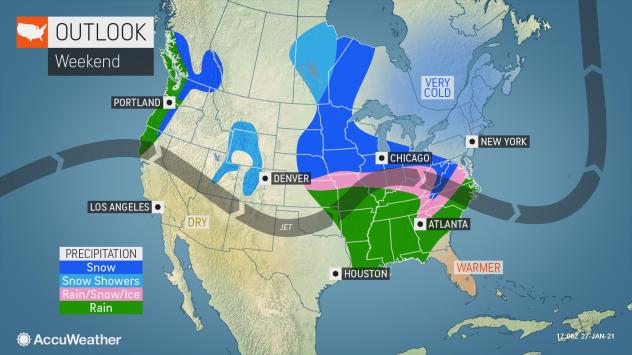 Arctic air, such as what will be settled over this swath of the country, is denser than the surrounding air. Thus, the Arctic air in place across an area extending from the eastern portions of the Dakotas down south into slices of the Carolinas and northern Georgia and north up into Maine won't easily be pushed out when the storm approaches.

As the storm advances eastward, it will tap into moisture from the Gulf of Mexico and, upon colliding with the Arctic air in place, most likely set up a swath of snow and ice that can extend for hundreds of miles along parts of Interstate 70, 80 and 90 corridors of the Central states by the start of the weekend.

"Some areas in the Midwest that were hit with heavy snow from the storm during Monday and Tuesday of this week could get hit again with more snow to shovel and plow," AccuWeather Senior Meteorologist Courtney Travis said. 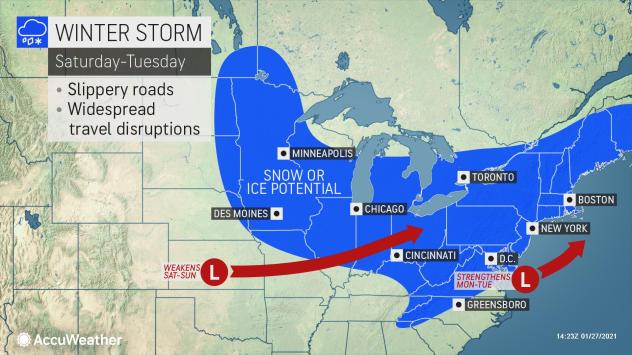 Next, that wintry precipitation is expected to spread into portions of the central Appalachians and mid-Atlantic region beginning later this weekend, where moisture from the Atlantic Ocean will come into play. And, the forecast in this area may get even more tricky during early next week.

"How much snow falls from the mid-Atlantic and central Appalachians to New England may depend on whether the storm re-strengthens or a secondary storm forms along the Atlantic coast on Monday," DePodwin said. 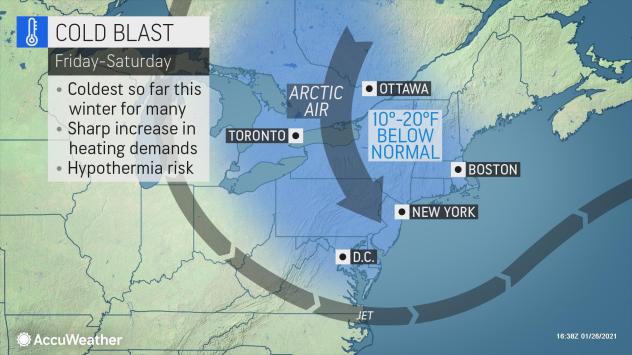 AccuWeather forecasters will be monitoring closely for signs that the second part of the storm along the Atlantic coast could develop. Should conditions allow that storm to develop, a potent nor'easter could unfold. With the cold air in place, a nor'easter could stall over the Northeast and have the potential to deliver heavy snowfall in some areas, as well other impacts such as gusty winds and possible coastal flooding.

Preceding the large storm will be a blast of Arctic air in the Northeast during the latter part of this week.

This cold shot may not only bring the lowest temperatures of the winter but may also be accompanied by locally blinding snow squalls that can make for dangerous conditions on area highways from the Great Lakes to the central Appalachians, the mid-Atlantic and New England.

Extreme rainfall could top 20 inches in California
Snow blowers worth the investment this winter
Winter storm unloads 'historic snow' as it marches eastward
Snow was so deep, city had to dump it off bridges