Coldest blast of the winter thus far to sweep across Northeast

The coldest air of the season will set the table for a significant snow storm early next week.

A fresh wave of Arctic air will send the Northeast into a deep freeze through the end of the week and produce some of the lowest temperatures of the winter so far in the region.

Snow squalls and snow showers will ride along with the frigid winds that will help send temperatures to dangerously low levels. However, forecasters say that the cold air will not be quick to depart and could set the table for a potential blockbuster winter storm in the coming days.

As north to northwesterly winds continue in the wake of an offshore storm, more cold air from Canada will be funneled across the Northeast into the start of the weekend. 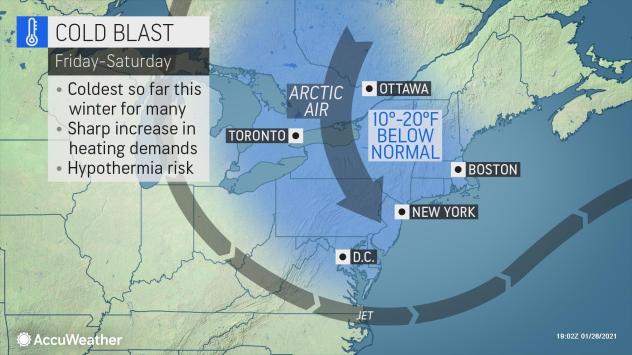 "There will be a biting wind that will make it feel like it's close to or even below zero at times," said AccuWeather Senior Meteorologist Carl Babinski.

At 8 a.m. Friday, Boston had a temperature of 7 degrees Fahrenheit. This is the lowest temperature recorded in the city since Jan. 31, 2019, when the mercury hit 5 F, according to the National Weather Service in Boston. The AccuWeather RealFeel® Temperature at 8 a.m. was -22 F.

"On Friday, most daytime temperatures in the region will be no higher than the 20s," said Babinski. "Temperatures staying in the 20s have not yet happened in New York's Central Park this season."

Back on Dec. 16, Central Park reached a high of 31 degrees F. On Friday, the forecast high is only 23 degrees.

Farther north, temperatures may not get out of the single digits in the Adirondack Mountains in upstate New York. That same area is likely to dip below zero Friday night.

"Burlington, Vermont, along the shore of Lake Champlain, has not dipped below zero yet this winter," AccuWeather Senior Meteorologist Alex Sosnowski said.

"Temperatures may dip below zero in Burlington Friday night, but if not, are likely to do so Saturday night if the sky remains clear and winds drop off," Sosnowski said.

Besides bringing the cold, the winds will also blow over the Great Lakes. Given the lack of sustained cold so far this winter, there is very little ice over the lakes. Therefore, moisture from the relatively warmer lakes will be picked up, resulting in lake-effect snow, flurries and snow squalls that can extend well inland for a time. 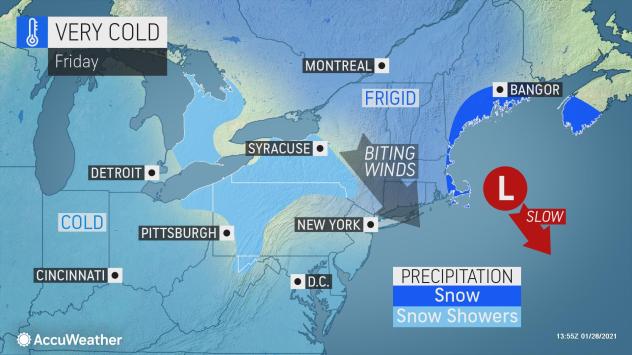 The greatest danger for motorists will be from sudden snow squalls in western and central parts of Pennsylvania and New York state, as well as northeastern Ohio into Friday evening.

Snow squalls are oftentimes narrow and conditions can change very quickly. Motorists can go from driving in no snow to heavy snow in a short distance. Travelers will need to heed caution along parts of interstates 79, 80, 81, 90 and 99 into Friday evening. Any snow squalls can reduce visibility and cause a quick accumulation on roads.

How cold weather helped make one of America’s most iconic films timeless
AccuWeather's annual sneak peek at US spring weather
What are snow squalls?
'Buckle up!' Big snowstorm on the way for Midwest, Northeast

Frigid conditions are likely to linger across the region Saturday before slightly milder air moves in Sunday. However, it will still be cold enough to potentially set the stage for a widespread winter storm beginning Sunday and advancing northeastward early next week. How to prepare your home for fall Families forced to flee as lava inches closer to their homes