Heavy rain led to floods and mudslides throughout Hawaii on Dec. 6, while blizzard conditions struck some of the island summits.

After bringing widespread heavy rain to Hawaii as well as blizzard conditions to the state's mountain peaks this past weekend, a storm system known as a Kona low is expected to continue pounding part of the islands this week, AccuWeather forecasters say.

Flash flooding and power outages occurred across parts of Maui County Sunday evening, prompting the closure of public schools Monday. Officials tweeted that the situation will be reevaluated Monday to determine whether schools will open Tuesday. Maui County offices were also closed and employees were urged not to report for work Monday, Hawaii News Now reported.

As of Monday evening, over 5,000 customers were still without power across Hawaii, according to PowerOutage.us. Mayor Mitch Roth of the County of Hawaii declared a state of emergency on the Big Island on Sunday, encouraging residents to remain indoors and stay off the roadways as much as possible. On Monday, Governor David Ige issued a state of emergency for the entire state due to the flooding and heavy rains. 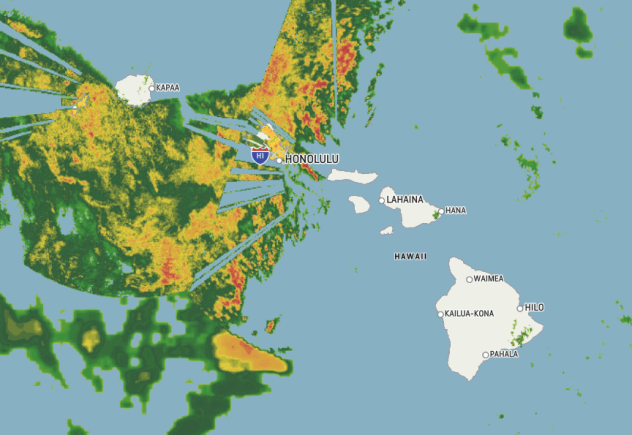 "There are many reports of fallen trees, downed power lines and other hazards that remain a risk," Roth said in a statement.

Elsewhere in the state, the city of Honolulu has reportedly opened several storm shelters on Oahu, according to Hawaii News Now.

Ige and the state's emergency management agency said they are coordinating with state and federal agencies to help respond to the storm's impacts.

“This storm has the potential to cause major flooding, landslides, road closures and damage to homes. Now is the time to make sure you have an emergency plan in place and supplies ready should you need to move away from rising water. When you are ready, please make sure that your neighbors have what they need as well. Our community is always stronger when we work together to ensure that we’re all protected,” the governor said on Sunday.

On Monday night, officials blocked off part of a neighborhood in Pearl City as floodwaters engulfed Noelani Street while residents worked to save what they could from already-flooded homes. Heavy ponding occurred on Liliha St. overpass as well, with cars driving dangerously through floodwaters. Debris was photographed floating in the streets and floodwaters reaching the headlights of cars in Honolulu.

The transition to stormy weather in early December has jolted the islands following a tranquil November.

"Much of the 50th state has been abnormally dry recently, with parts of Hawaii in severe to extreme drought," said AccuWeather Meteorologist Ryan Adamson, adding that a very dry November intensified the drought there.

So far in December, Honolulu has reported over 93 times the amount of rainfall it received in November, with 7.71 inches falling on Monday alone. Kailua has recorded more than 1.6 inches of rain only six days into the month, which is not only near the typical average it sees by the end of December, but it is also over 12 times what fell last month. 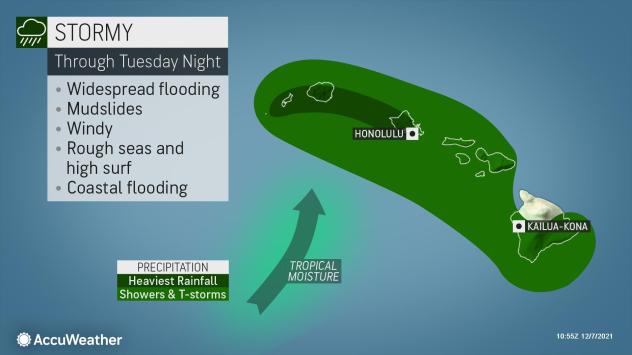 Rain first arrived late last week and was accompanied by gusty winds. Blizzard conditions were forecast for the volcano summits on the Big Island. Forecasters said gusts ranging from 80 to 100 mph were possible at the highest elevations.

Aside from the flooding rain, cities such as Honolulu have experienced quite chilly conditions compared to average and have even set record lows. The Big Pineapple typically doesn't stray too far from its average temperatures, which remain in the lower 80s Fahrenheit in the day and around 70 degrees at night.

Early Saturday, Honolulu reached a record low of 56 F. Temperatures remained below average Saturday, and Sunday, as the high didn't even reach 70 F, a rare feat for such a tropical location. This was the first time the city failed to hit 70 all year.

AccuWeather forecasters say Kona lows are a type of storm that can occasionally impact Hawaii by changing the wind direction from its normal east-northeast direction to the southwest. They can bring heavy rain to places that don't typically receive high amounts of precipitation other times of the year. 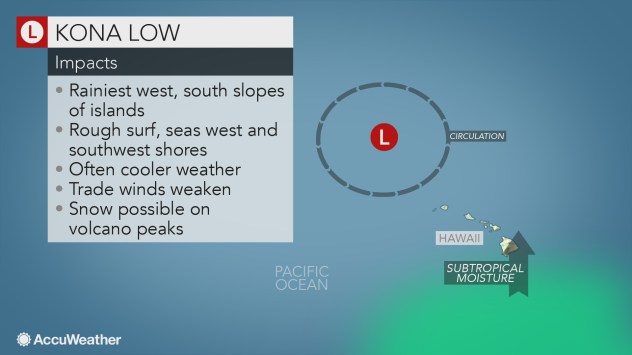 "The upper-level low pressure which spawned the Kona low over Hawaii will retrograde, or move westward, over the next couple of days," said AccuWeather Senior Meteorologist Michael LeSeney.

As of early Tuesday, some of the highest rainfall reports thus far include 24-hour totals of 8.70 inches on the south side of the Big Island and 11.28 inches on southern Maui.

Everything from flood watches, wind advisories, flash flood warnings and coastal flood statements has been issued across the islands, but the most notable warning in effect would have to be the blizzard warning atop mountain peaks on the Big Island that ran through 6 a.m. Monday, local time.

While Hawaii is known for being a warm, tropical paradise, snow at the highest elevations isn't entirely uncommon. Though some of these warnings have already ended, the risk for flash flooding across all Hawaiian islands is expected to continue at least through Tuesday afternoon.

"Until this low moves out of the region, the heavy rain over Oahu, Maui County and the Big Island will likely continue throughout the day on Tuesday," LeSeney added.

By midweek, heavy rain will likely be more isolated to certain islands. Though Honolulu could have rain Wednesday, it won't be nearly as heavy as what's expected Tuesday.

"As the Kona low moves farther to the north and west, the heavy rain will shift over Kauai on Tuesday and could persist through Wednesday," said LeSeney.

Rainfall totals could be measured in feet in some locations when all is said and done.

“There is the potential for up to a foot of rain to fall on Honolulu with an AccuWeather Local StormMax™ of 40 inches possible for the south- and southwest-facing mountainsides of the islands,” AccuWeather Senior Meteorologist Alex Sosnowski warned and added that a firehose effect would continue to focus on Oahu and Kauai through much of Tuesday.

Residents can look forward to business as usual soon as rain and winds subside across the archipelago.

"By the second half of the week, the typical trade wind pattern should return to the Hawaiian Islands," LeSeney said.