AccuWeather forecasters break down the expected dangers through the middle of January, which will be compounded by each passing storm, and provide insights into what’s to come for the remainder of winter.

AccuWeather meteorologists warn that a series of storms lining up across the Pacific Ocean will continue to bring rounds of heavy rain and mountain snow to California and neighboring states.

Deadly storms unleashed fierce back-to-back blows to California at the end of 2022 and the start of 2023, and AccuWeather meteorologists warn that a series of storms lining up across the Pacific Ocean will continue to aim for the Golden State with rounds of heavy rain and mountain snow. The dangers of flooding and mudslides will increase with each passing storm.

The atmosphere has flipped the switch to storm mode as the weather pattern through mid-month has the potential to unleash more than a foot of additional rain in some locations and many more yards of snow over the high country of the Sierra Nevada. 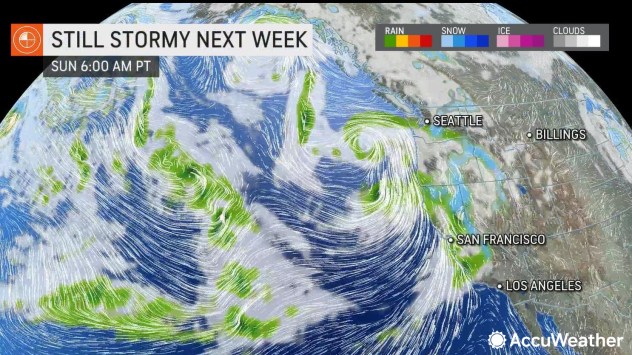 "Factoring in the storms that began in late December forward through mid-January, rainfall and mountain snow in some areas could rival amounts that do not occur, on average, for 25 or 50 years or more," AccuWeather Senior Meteorologist Mike Doll said.

A couple of upcoming rounds, in particular, have drawn the attention of AccuWeather forecasters.

"After a couple of weak storms [relatively speaking] this weekend, a bigger storm will arrive early next week and then another big storm the following week," AccuWeather Lead Long-Range Meteorologist Paul Pastelok said. 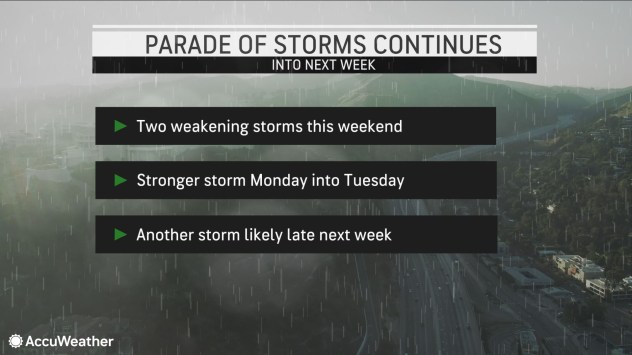 The impacts from these upcoming big storms will be to unleash new rounds of torrential rain, flash flooding and mudslides, as well as tremendous, road-clogging snow and avalanche danger over the Sierra Nevada.

The storm from Sunday night to Tuesday has the potential to be the biggest of the bunch in terms of the amount of rain that could be focused on central portions of California. That storm is likely to bring higher snow levels when compared to the storm into Thursday and the storms this weekend. The higher snow levels may unleash more of a combination of heavy rain and melting snow at intermediate elevations of the Sierra Nevada, which may then surge into San Joaquin and Sacramento Valley streams and rivers.

"Along with the ongoing risk of life-threatening incidents from flash flooding and mudslides for each storm, the potential for a catastrophic flood event will increase as the stormy pattern continues," AccuWeather Chief Meteorologist Jon Porter said. 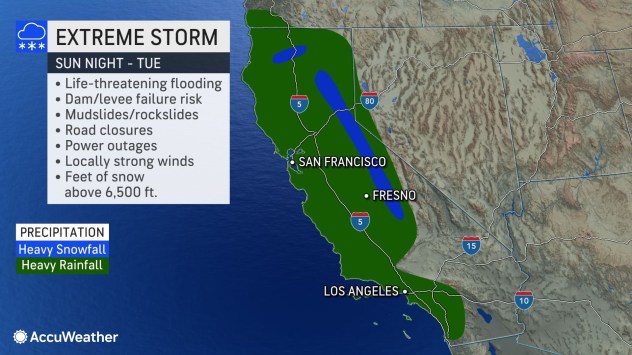 As the ground remains saturated during the pattern, rounds of strong winds can cause some trees to topple over. The strong wind gusts can lead to periodic and widespread power outages.

The impact on airline travel alone from the storms on the major hubs of San Francisco and Los Angeles can have substantial ripple effects across the United States and the globe as crews and aircraft are displaced. The combination of heavy rain, low cloud ceilings, poor visibility and strong winds can lead to lengthy ground stops.

Meanwhile, motorists are strongly urged not to drive through flooded roads as the water may be deeper than it appears, and in some cases, the road surface may have been completely washed away beneath floodwaters, AccuWeather forecasters say. Traveling along winding, secondary roads in hilly areas could be hazardous due to flash flooding and debris flows.

How long will the stormy pattern persist in the West?

"This setup will continue until around Jan. 16 or 17 for California," Pastelok said. 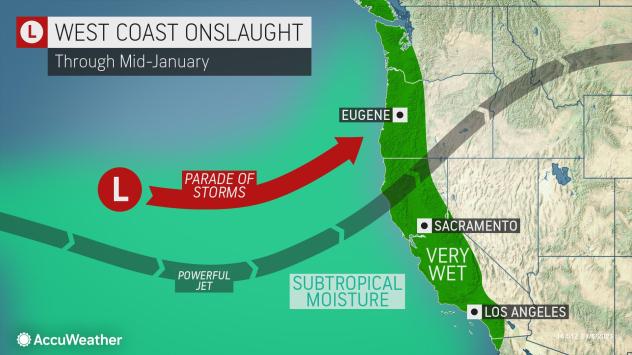 Around that time frame, the storms will tend to swing to the north and farther inland. When that happens, precipitation amounts will tend to dwindle in California but can ramp up more so over the interior West, and that could impact the Colorado River basin with more significant precipitation events.

"During the latter half of January, there should be a break off from the subtropical moisture at the very least," Pastelok said.

But, this year will play out in a different way than last year when the storm train suddenly and completely ended for much of California. During the period from Oct. 1, 2021, through Jan. 5, 2022, San Francisco picked up 16.70 inches of rain. Even though San Francisco is behind the prior year's blistering pace by more than 3 inches at this point of the season, more rain is coming through the winter and into the spring. 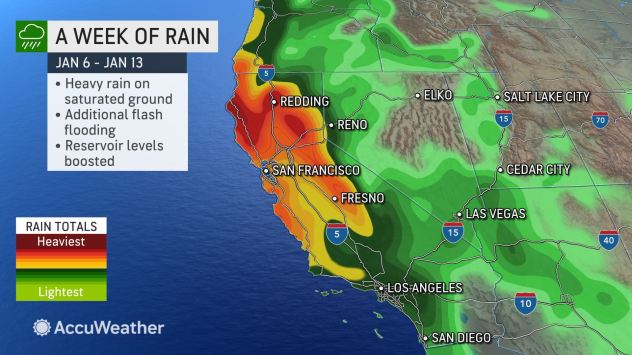 Additional rain may exceed a foot in parts of Northern California from later this week through next week alone.

"Storms are likely to resume during February and March, just probably not to the magnitude as is occurring now and what is likely to continue through mid-January," Pastelok said. "There should be a much better outcome in terms of drought relief with rain and mountain snow this winter, compared to last winter."

Unlike last winter, there should not be a massive warmup and dryness lasting months from the winter through the spring that caused the ground to become parched, reservoirs to evaporate and mountain snow to disappear before melting and running off into area streams and rivers.

"Northern and Central California will get out of the drought situation by this summer."
Paul Pastelok, AccuWeather lead long-range forecaster

However, in areas east of the Sierra Nevada, such as the Colorado Basin and perhaps in Southern California, it may be harder to completely alleviate the drought that has been underway for the past decade, he cautioned. 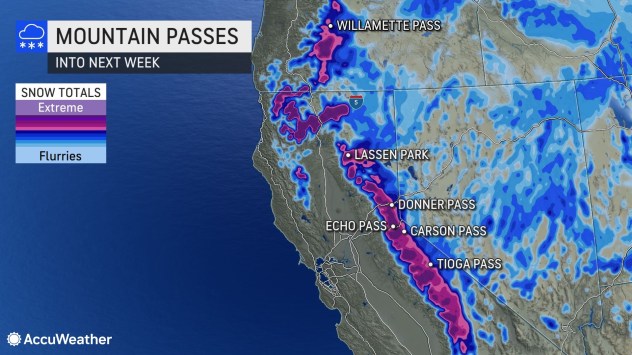 Yards of snow are forecast to pile up on the Sierra Nevada into mid-January.

Snow cleaning crews may struggle to find time to keep roads open over the Sierra Nevada passes due to the frequency of the storms and the heavy snow each will bring.

Father charged and arrested after driving Tesla off California cliff