Several large debris flows and mudslides have been reported in wildfire burn scar areas as California is hammered by a major fall storm Oct. 24.

A much-needed rainy stretch of weather has been welcome so far for much of the Northwest, including Northern California. Much of the region is in severe, extreme or exceptional drought, as classified by the U.S. Drought Monitor. However, AccuWeather forecasters say a powerful storm that will culminate this rainy stretch through early week will end up becoming too much all at once, and will bring dangers and significant impacts to the region.

On Sunday afternoon, flooding reports began to pop up across the region. A reporter for the Press Democrat shared a video on Twitter of a flooded street in Santa Rosa, California, that led to the evacuation of an apartment building.

By late Sunday afternoon, Santa Rosa Mayor Chris Rogers said 95 homes and one four-unit apartment complex had to be evacuated due to flooding. Water rescue crews has to assist in evacuating some residents.

The police department in Hillsboro, Oregon, also issued a warning via social media on Sunday afternoon of flooding streets filled with debris. The department warned that flash flooding was present throughout the entire city.

Power outages throughout the region were rampant on Sunday. At one point in time Sunday afternoon, over 160,000 customers in California were out of power amid the powerful storm, while 28,000 were out in Oregon and 109,000 were out in Washington.

According to Flight Aware, The San Fransisco International Airport had issued 139 delays to outgoing flights and 27 cancelations. The airport also delayed 157 incoming flights and canceled 31. Spinouts and car crashes were reported on the streets of the city amid the drenching downpours, AccuWeather's Bill Wadell reported.

According to Wadell, the entire Bay Area was experiencing rough surf along the coastlines and downed trees and powerlines on Sunday.

For the days leading up to Sunday, while there have been pockets of heavier rain, the rain has been coming at a much slower and steadier pace for portions of Washington, Oregon and Northern California. Redding, California, has recorded measurable rainfall for six straight days, starting on Oct. 17. In comparison, before this streak started, there were only six days of measurable rainfall in Redding from April 25, to Oct. 16.

The early stretch of wet weather has put cities like San Francisco, Sacramento and Redding, California, and Medford, Oregon, well ahead of average pace for rainfall in October. 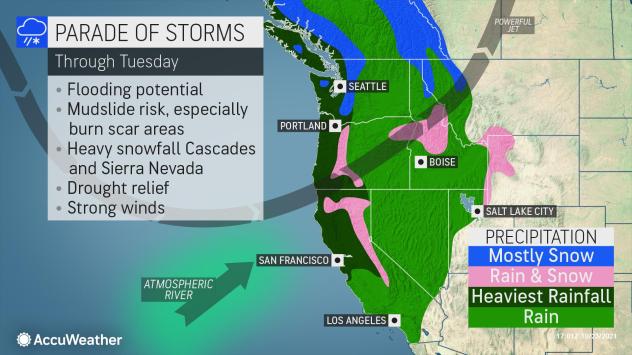 The string of rainy days is all thanks to a parade of storms that has been tracking across the northern Pacific. At times, some of these storms have become quite intense as they churned off of the coast. One of the storms in the parade strengthened into a powerful bomb cyclone off the coast of British Columbia on Thursday. However, the brunt of rain and wind with that storm was focused farther north toward the coast of British Columbia, where wind gusts to 100 mph were reported. Offshore, waves reportedly reached 35 feet.

Satellite images showed Thursday's storm spinning over the northern Pacific -- taking on an almost hurricane-like appearance -- just off the coast of western Canada and the Northwest. The storm’s central atmospheric pressure plummeted to 28.08 inches of mercury (951 millibars) Thursday afternoon — down from 29.12 inches of mercury (986 millibars) on Wednesday and enough to meet the official criteria for bombogenesis, which occurs when a storm’s central pressure drops by at least 0.71 of an inch of mercury (24 millibars) within 24 hours.

Forecasters warn that the current bomb cyclone that is underway will continue to direct its fury toward California, unleashing over a foot of additional rain in some areas and up to 8 feet of snow over the mountains. Even though the precipitation is much-needed across the drought-stricken region, it could lead to serious flooding, mudslides and significant threats to lives and property.

But the storm won’t be all bad news.

"This rainfall is coming about a month ahead of average and will be very welcome in fighting the remaining fires, particularly in Northern California," AccuWeather Chief Meteorologist Jon Porter said. "Repeated storms delivering such copious rainfall will have a major effect on the wildfire season – effectively ending the wildfire season from Northern California northward," Porter added.

Wildfires have burned 1.9 million acres in California in 2021, according to the National Interagency Fire Center. Eight out of the 17 massive fires burning in the United States were all raging in California, as of Thursday.

On the other hand, rainfall will come "too fast and too furious” in some areas with rates of up to 2 inches an hour, according to Porter.

The excessive rainfall has already resulted in flash flooding and other dangers like mudslides and debris flows, particularly in burn scar areas from wildfires that charred the ground in recent years.

On Sunday, multiple mudslides were reported in areas where wildfire burn scars affected the land. One landslide even resulted in the closure of Highway 70 in Plumas County, California, in the burn scar leftover from the Dixie Fire. Soot and ash filled floodwaters that poured through once-dry creeks as powerful rivers. 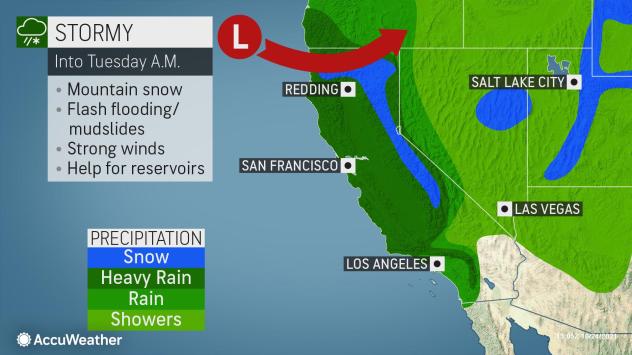 Since this second bomb cyclone continues to travel farther south than the prior storms of this past week, it is expected to bring heavier precipitation and stronger winds along the West Coast — and it will pull in deep tropical moisture from the Pacific, creating what meteorologists refer to as an atmospheric river.

An atmospheric river is almost like a firehose of moisture in the sky and is capable of unleashing intense rain and mountain snow. Moisture from the developing atmospheric river is taking aim at the northern and central portions of California as well as part of southern Oregon with the greatest intensity through Monday night.

During this time frame, rain can pour down at the rate of 1-2 inches per hour for a time over several hours and could lead to rapid runoff over the steep terrain that faces the ocean. Widespread rainfall totals of 4-8 inches of rain are predicted in Northern and Central California. Along the western-facing slopes of the mountains north of San Francisco, as well as the foothills of the northern Sierra, 8-12 inches of rainfall is expected, with an AccuWeather Local StormMax™ of 16 inches from Sunday to Monday night. 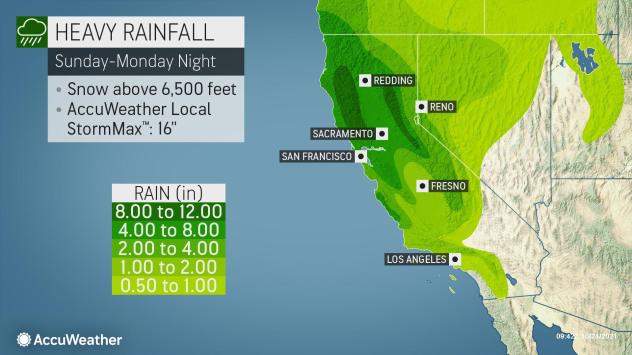 On top of the excessive rainfall, strong winds associated with this bomb cyclone, will blast the coast of Northern and Central California and southern Oregon, as well as the Sierra and parts of the Sacramento Valley into Monday. In this zone, wind gusts will average 40-60 mph, but some extremely high wind gusts were observed across the High Sierra. At this force, tree and property damage can occur, and sporadic to regional power outages are likely.

In addition to unleashing excessive rain, the storms will bring tremendous amounts of snow to the mountains. As colder air arrives with the storm, snow began to fall at elevations above 8,000 feet, but then fall to elevations around 6,000 feet by Monday.

"Given the amount of moisture aiming at the northern and central Sierra Nevada, there can easily be 60-100 inches of snow at levels above 8,000 feet," AccuWeather Senior Storm Warning Meteorologist Rich Putnam said. That translates to a prolific 5-8 feet of snow or around 2 yards of snow at the ski resorts in the Sierra Nevada.

The heavily traveled Donner Pass along I-80 in California, about 40 miles west of Reno, Nevada, will see a changeover to snow Sunday night, and heavy snow will continue to fall through Monday night. There is the potential for 1-2 feet of snow and locally higher amounts, which could shut down travel for a time along the major highway. 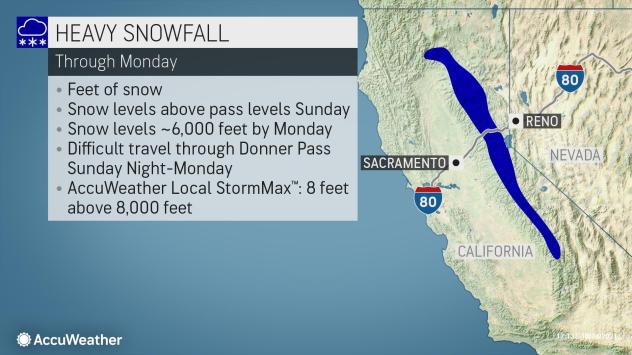 While the heaviest rain and mountain snow will focus on Northern California, southern parts of the state will also get in on the action during the day on Monday.

As the storm shifts south on Monday, a shot of heavy rain will target the central coast and southern Sierra. However, by this time the storm will start weakening, and much lesser amounts than farther north are expected. Still, in the rugged terrain of the Coastal and Transverse ranges of Central and Southern California, as well as the southern Sierra, enough rain can still fall to cause dangerous flash flooding.

A general 0.50 of an inch of rain is forecast to fall as far south as Los Angeles Monday. Locally higher amounts of 1-3 inches are expected over the mountains to the north and east of Los Angeles. Down the coast in San Diego, rainfall amounts will generally remain below 0.50 of an inch, although up to an inch can fall in the mountains of San Diego County. 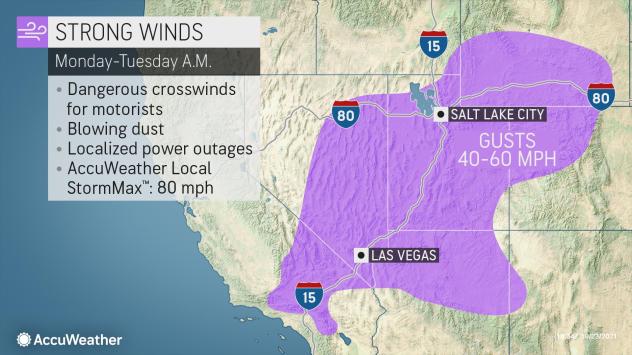 Strong wind gusts will also translate south and east on Monday, whipping from the Upper Deserts in southern California into the Wasatch Range in Utah.

Downtown Los Angeles has only received 0.40 of an inch of rain since the start of the new rain season on July 1. The average rainfall for all of October is only 0.33 of an inch for Los Angeles and 0.29 of an inch for San Diego. Locally soaking showers may even reach the deserts of Southern California and southern Nevada.

Back in Northern California, the parade of storms "will have a positive impact on the water table," Porter said, but added that they "won’t be enough to solve all of the water problems which have been compounding for many years."