Hurricane Rick has made landfall in southern Mexico

Mexico's southwestern Pacific coast will need to remain on high alert through the end of the weekend as newly formed Hurricane Rick has churned up in the warm tropical waters of the eastern Pacific Ocean.

Rick continued to strengthen quickly and by Saturday morning it became the eighth hurricane of the East Pacific season.

At 5 a.m. CDT Monday, Rick made landfall along the southern Mexico coast roughly 15 miles (25 km) east of Lazaro Cardenas. Rick was packing sustained winds of 105 mph (165 km/h) and was a Category 2 hurricane on the Saffir-Simpson Hurricane Wind Scale. 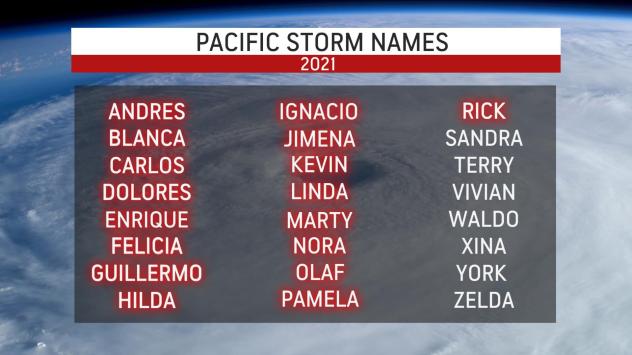 To recall, Hurricane Pamela was the last storm to impact Mexico, which made landfall on Oct. 13 between Matzalan and La Paz, in the coastal state of Sinaloa. Pamela then raced northeastward through the mountainous terrain, spreading heavy rain and gusty winds northward. Although Pamela lost tropical characteristics before crossing the border into Texas, energy from the former storm managed to produce flooding rainfall and multiple tornadoes in Texas.

A similar scenario is possible with Rick, as a northward track through Mexico is expected.

Conditions across this zone of the eastern Pacific were favorable enough to allow Rick to strengthen upon the final approach towards land. Through the morning hours on Monday however, an increasing amount of interaction with mountainous terrain should begin to cause the hurricane to lose wind intensity as it moves inland. 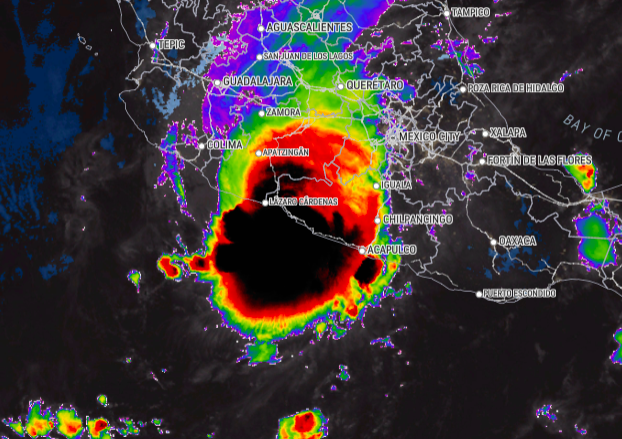 Sinaloa will be spared from the harshest weather Rick is expected to dish out, as a landfall farther south along the coast occurred on Monday. Many cities in the Mexican states of Jalisco, Colima, Michoacán, and even Guerrero need to remain on alert as gusty winds and spiraling rainbands come ashore throughout the day.

Residents and travelers in cities along Mexico's Carretera Pacífico Highway from Acapulco to La Manzanilla need to remain alert and vigilant as Rick moves overhead. Damaging wind gusts, flooding rainfall and massive swells can be expected even after Rick moves inland on Monday. 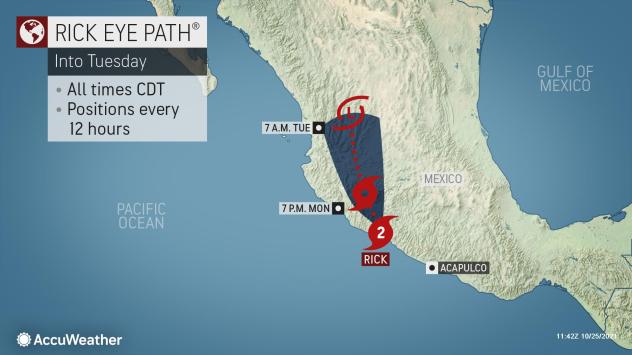 Regardless of any loss of wind intensity upon interaction with land, very heavy rain from Rick will track up Mexico's Pacific coast and into the rugged mountainous terrain.

"Heavy rainfall on the order of 8-12 inches (200-300 mm) with an AccuWeather Local StormMax™ of 20 inches (500 mm) will result in widespread flooding and mudslides across the region beginning Sunday and lasting through early week," AccuWeather Senior Meteorologist Rob Miller stated. 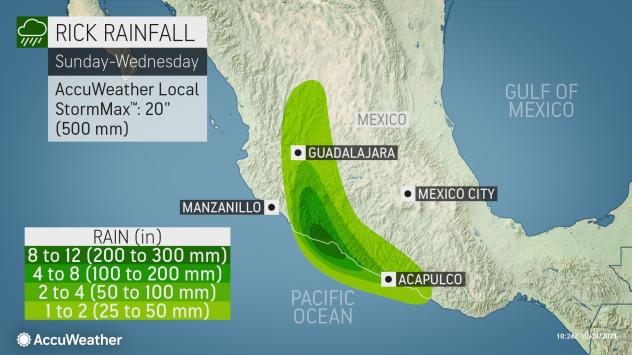 Strong wind gusts will likely compromise the structural integrity of buildings near the center of Rick at landfall. Damaging wind gusts of 100-120 mph are expected near and just east of the landfalling hurricane. 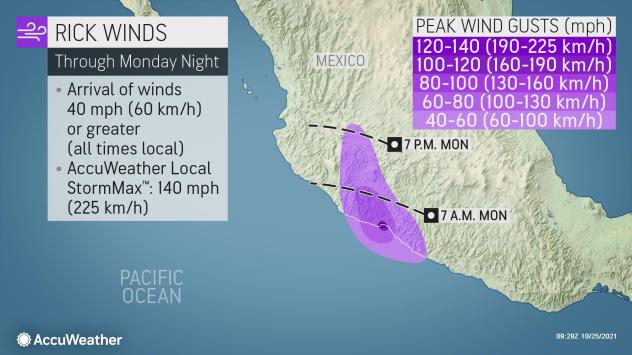 Because of the risk for damaging wind gusts, flooding rainfall, storm surge and economic factors, Rick will be a 2 on the AccuWeather RealImpact™ Scale for Hurricanes.

After landfall on Monday, Rick will likely roll northward through central and northern Mexico. The rugged terrain will begin to shred the low-level circulation associated with Rick, resulting in a rapid decrease in wind intensity. Rainfall will continue to be wrung out, potentially raising flooding concerns in Guadalajara, León and surrounding areas Monday night into Tuesday.

The remaining upper-level energy associated with Rick left after traversing the mountainous terrain of central and northern Mexico may then continue lifting northward by midweek. While there is still time to monitor the evolution and track of the storm, residents in Texas and along the Gulf coast will want to keep an eye out for wet weather.