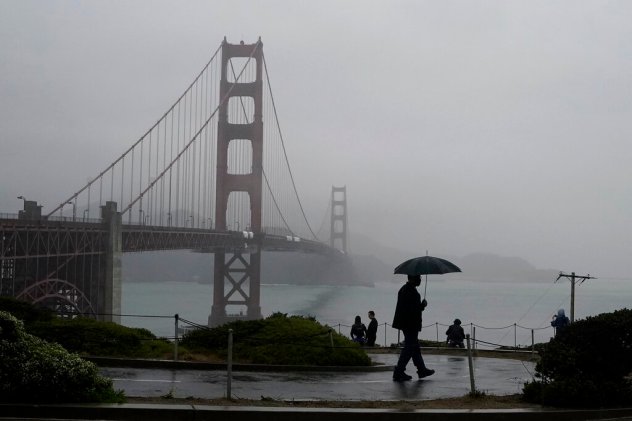 A pedestrian carries an umbrella while walking on a path in front of the Golden Gate Bridge in San Francisco, Wednesday, Oct. 20, 2021. Showers drifted across the drought-stricken and fire-scarred landscape of Northern California on Wednesday, trailed by a series of progressively stronger storms that are expected to bring significant rain and snow into next week. (AP Photo/Jeff Chiu)

Monstrous, beastly and... just what people have been waiting for.

As a gigantic bomb cyclone was gearing up to unload astounding precipitation totals on the western United States, forecasters described the weather system as potentially one of the biggest storms of the year. Really, it's a parade of three storms set in motion by a major bomb cyclone.

So, how were the people living in these soon-to-be-struck areas feeling about the incoming deluge?

At least that was the sentiment expressed by many on social media as they shared the initial AccuWeather forecast calling for a "beast of a bomb cyclone" to hit.

After many residents of the American West have endured what's been the deadliest and most destructive wildfire decade on record, not to mention historic drought, there is a strong sense of relief and joy among many who spoke out on social media.

Even though the 2021 wildfire season was less destructive than last year's in terms of acres burned, it was still exhausting, deadly and a significant drain on resources. The wildfire season and worsening drought may also have added to the cumulative drain on the emotions of those living across the western U.S. 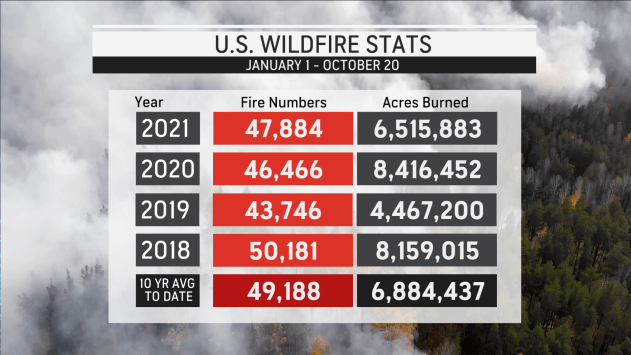 On social media, Twitter and Facebook users alike shared their excitement for the incoming storm – not only for its likely wildfire suppression but also for its answer to the long-lasting prayer for drought relief.

Back in early June, Utah Gov. Spencer Cox encouraged his state to pray for precipitation.

“I’ve already asked all Utahns to conserve water by avoiding long showers, fixing leaky faucets, and planting waterwise landscapes. But I fear those efforts alone won’t be enough to protect us,” Cox said back in early June. “We need more rain, and we need it now.”

More than six months later, that prayer is finally being answered. Utah has seen some snowfall this month and now significant rain is coming to California, Oregon and Washington.

The jubilation for the storm can be felt throughout the western U.S., particularly along the Pacific coast. Residents of Southern California expressed joy on social media with a variety of memes, emojis and GIFs.

Farther inland, Nathan Wayman of Flagstaff, Arizona, also expressed his enthusiasm for the storm, sharing his particular excitement for the snow and the new adventures that come with it.

"I am an avid mountain biker and snowboarder. Last year was a pretty mild winter, so the snowboarding was average at best," Wayman told AccuWeather. "With the little snow we received, our national forests were shut down a few weeks in the spring due to extreme dry conditions. This hindered hiking, biking, camping and other popular spring activities."

"I have been hoping for a very white winter all year. We already received a snow day this year, so things are looking promising!" Wayman added. "Luckily, our area was never in danger of fire. Plenty of the West had a very rough fire season, so this would help them out tremendously."

There is a flip side, however. For as exciting as the turn of the season can seem, the dangers of this storm could be life-threatening.

The storm's intense rain packs with it the risk for flash flooding, particularly in burn scar areas.

“We’re worried about flash flooding, mudslides and also debris flows in the areas around the fires," AccuWeather Chief On-Air Meteorologist Bernie Rayno said on Thursday. "Whether it's the Antelope Fire, the Caldor Fire, the Dixie Fire, all of those fires that have been burning this summer are under the threat for mudslides and debris flows because of the rain that we’re projecting here.”

That danger wasn't lost on those discussing the storm on social media, and especially among people who have already dealt with rounds of flooding this year.

I 💙 this but sadly, with all the millions of burned acreage, we'll have other disasters from flooding to landslides. https://t.co/cMuAu2rkwL

And, like with any storm, someone's parade is going to get rained on. Major weekend events, like festivals, concerts and college football games, including UCLA and Stanford's Saturday home games, will likely be impacted by the storminess.

On a smaller scale, so will an individuals' plans, like one Twitter user who was simply hoping for a seamless moving weekend.

Of course, a massive storm is going to hit the PNW the weekend I move https://t.co/vBXvw5hpMD

Brittany Fosberg told AccuWeather that, despite the disappointment she voiced on Twitter, she's a lifelong Washington resident and is never surprised by a feisty storm.

"I’m not too worried about this storm. I grew up in western Washington and have come to expect there to be one or two major storms each fall/winter, so it’s just a matter of making sure you’re prepared and know what to expect," she said in a message.

Regarding her move, she added that she and her family will just have to gear up for the usual conditions with the appropriate attire.

"Rain is just part of daily life in western Washington this time of year," she said. "So I would almost be more surprised if it didn’t pour on the one day we need it to be clear!"

Fosberg also added that her whole state is in need of the rain "pretty badly," particularly the eastern portion of Washington.

But in other areas of the West, any prayers requesting rain will remain unanswered for now. If the reaction of Twitter user Christine Eliaz is any indication, some people in parts of the parched West are disappointed that they won't see the much-needed precipitation -- and fearful for what may happen if it doesn't come soon.

Eliaz, who lives in Las Vegas, told AccuWeather, "It once again looks like we are not going to get any rain from this system. We are in serious trouble as everyone knows if there is not a hefty snowpack this winter."