Developing storm may bring a breath of winter to Northeast

Across the continent this past week, people recorded their dogs enjoying snow to an extreme.

As the gears of winter continue to churn and the slow-starting season continues to pick up steam, a breath of stormy air could potentially bring a wintry mix to the Northeast this week.

AccuWeather experts continue to keep an eye on a developing storm that could prove potent. After dousing large portions of the Mississippi Valley and Ohio Valley over the weekend, the storm will transition northeastward and a trailing cold front will bring an influx of moisture over the eastern half of the country.

"Showers will stretch farther east across much of the Eastern Seaboard, with the exception of southern New England, where even some rumbles of thunder will develop on Monday," AccuWeather Meteorologist Mary Gilbert said. 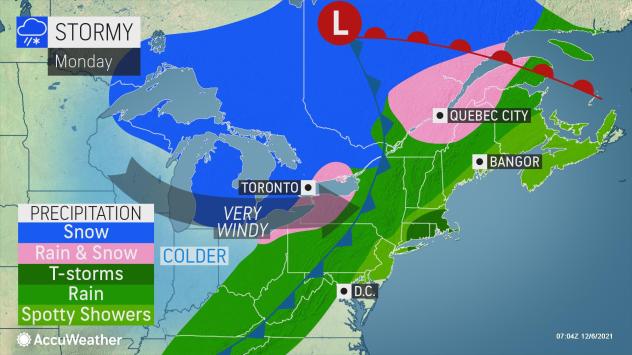 Before this potent storm reaches the eastern United States, however, a separate event currently ongoing over the Great Lakes will continue to spread snowfall throughout the remainder of the weekend and into the early week across portions of the Midwest into southern Canada.

As this initial storm continues to transition northeastward, the trailing cold front will quickly shift across the Northeast on Monday and bring an influx of moisture over the Eastern states. Ultimately, a large swath of steady rainfall is expected to spread from as far south as Birmingham, Alabama, northward to Caribou, Maine.

As the front traverses across the Northeast, forecasters say that fierce winds will develop throughout the daytime and evening hours on Monday. Local wind damage is expected to occur as a result of widespread winds ranging from 30-50 mph, with locally stronger winds ranging from 50-70 mph across higher terrain and at the immediate coast.

Fallen trees and broken limbs due to the wind can also heighten the risk for power outages and travel disruptions across the region. Airline delays and turbulence can also be an additional impact that travelers may face on Monday. 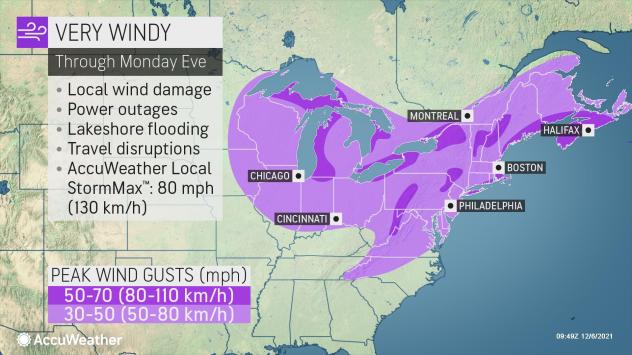 In addition, blustery winds across the Great Lakes can also lead to the threat of localized lakeshore flooding when the waters are pushed to the eastern coastlines. Residents are cautioned to secure outdoor holiday decorations as well.

"This storm will push northeastward and exit the United States early Monday night, allowing an area of high pressure to begin to build in the storm's wake," Gilbert explained.

Across the Northeast on Tuesday, a region of high pressure will bring generally dry, although drastically cooler conditions and allow a brief reprieve for cities such as Washington, D.C., Pittsburgh and Philadelphia.

The tumultuous changes in temperatures from Monday to Tuesday will give residents across the northern tier of the country the impression that a breath of winter has arrived.

"Anyone out and about on Tuesday morning will need to bundle up as AccuWeather RealFeel® Temperatures plunge below, or even well-below freezing from the Plains to the mid-Atlantic and Northeast," Gilbert cautioned. 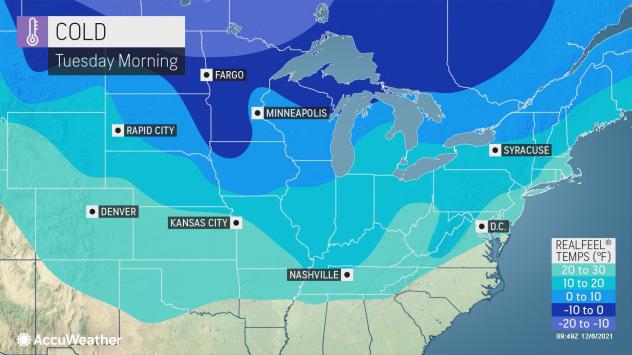 Cities such as Philadelphia and New York City will have 24-hour temperature differences from midday Monday to midday Tuesday drop 20-25 degrees Fahrenheit after a quick surge of above-average temperatures on Monday.

As cold air plunges southward from Canada into the Ohio Valley and mid-Atlantic states on Tuesday, daytime high temperatures are expected to be near freezing across locations such as St. Louis, Indianapolis and Pittsburgh.

As the sun goes down Tuesday evening, the cold air is expected to descend even farther south. Regions from northwestern Texas to the Carolinas are forecast to have overnight low temperatures drop into the 30s F as the storm shifts eastward.

"The brief reprieve from stormy weather across the Northeast is likely to disintegrate as Tuesday night approaches," Gilbert said.

A storm is forecast to race across the South Central states at the start of the week and reach the Atlantic Coast by midweek. From there, AccuWeather forecasters say the Northeastern states may be in for a significant bout of winter weather.

AccuWeather Meteorologist Alex DaSilva explained, "Once most of the ingredients for this storm move onto the West Coast on Monday, we should have a much better picture about where the storm will track and who will see the most impactful weather."

With the possibility remaining for the storm to track across the mid-Atlantic states, forecasters warn that if moisture reaches the colder air across parts of West Virginia, Maryland, Pennsylvania and New York by Tuesday night, the result could be accumulating snowfall and slippery conditions. 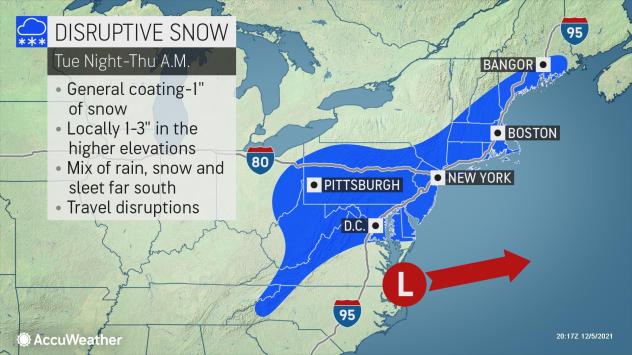 "This first scenario would involve a stronger storm close to the East coast that can bring heavier snow to inland portions of the Northeast and mainly rain mixed with some snow to coastal areas," stated DaSilva.

On the other hand, a second scenario can occur if the storm takes a more southerly track and shifts farther out to sea. This storm track would result in lighter snow showers across the interior Northeast, while still perhaps a mixture of rain and snow across coastal cities. In this second scenario, the cold air could potentially dive even deeper across the Southern states and bring a wintry chill all the way to the Carolina coastline.

Locations that will have the best chance for accumulating snowfall include portions of the interior Northeast. Although, minor shifts in the track of the storm can result in accumulating snow for coastal cities.

AccuWeather meteorologists will continue to analyze the forecast in the coming days and provide the most current updates regarding the track of the midweek storm across the East.