The first blizzard of the season left behind a significant mark in the northern Plains as it unleashed fierce winds, heavy snow and ice that led to treacherous conditions along the region's main travel routes Wednesday night into Friday.

AccuWeather meteorologists predicted the snowstorm days in advance, highlighting the risk for travel to turn difficult and dangerous quickly as the heaviest snow was expected to pummel the Interstate 94 corridor in North Dakota.

As forecast, the heavy snow, combined with gusty winds, led to dangerous driving conditions with whiteout conditions at times, resulting in the North Dakota Department of Transportation (NDDOT) posting "no travel" advisories along a portion of the highway on Thursday.

First blizzard of the season buries the northern Plains

In total, 1-2 feet of snow were observed across much of the state, with amounts toward the high end of this range near the state capital of Bismarck. Prior to this storm, the city's highest single-day snowfall in November was 10.8 inches set on Nov. 24, 1993. On Thursday alone, Bismarck recorded 17 inches of snow, shattering the prior record. The city's monthly average is 8 inches.

At one point during the storm, blizzard warnings were in effect for a number of counties across north-central South Dakota, central and eastern North Dakota and northwestern Minnesota, with strong wind gusts over 40 mph hampering visibility for much of the storm's duration. A blizzard is defined as a snowstorm with one-quarter-mile visibility or less with winds of 35 mph or greater for three consecutive hours. 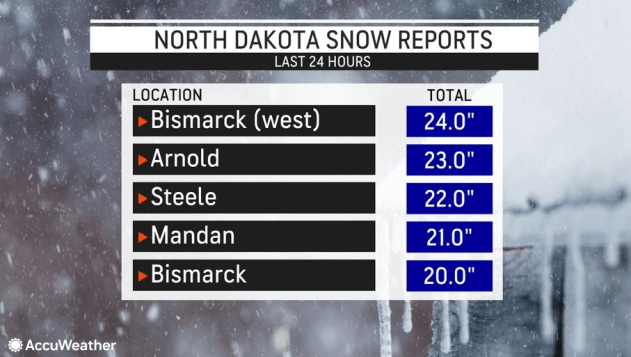 While the storm remained all snow for most of the state, southeastern areas of North Dakota were on the receiving end of a hazardous mix of icy precipitation. Fargo reported both sleet and freezing rain during the early morning hours of Thursday before precipitation switched to all snow during the afternoon.

A portion of I-29 between Fargo and Grand Forks was shut down for several hours Thursday morning as a result of icy conditions. The highway reopened shortly after 10 a.m. CST.

Law enforcement officials in Cass County, home to Fargo, posted pictures on Twitter of an overturned tractor-trailer near the Casselton overpass on I-94 eastbound.

"If you must travel today, please use extra caution, drive slow and do not use your cruise control," the Cass County Sheriff's Office tweeted.

WC MN Troopers are responding to a few crashes - roads are covered in snow/ice and obviously slippery. Please drive with care. This pic I94 EB mp13 (10 miles east of Moorhead) no inj. partially blocking the EB left lane. 11/11/22 at 8am pic.twitter.com/nb6x6V9qC3

By Friday morning, the snowstorm had moved into northern Minnesota where slippery and icy road conditions resulted in more accidents along I-94. In North Dakota, conditions remained treacherous for driving throughout the state as some roads previously cleared became covered with snow once again as a result of blowing and drifting. 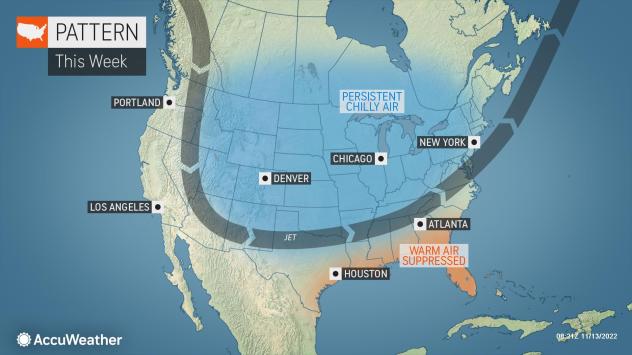 In the wake of the storm, the region is experiencing the coldest air yet this season as Arctic air plunges southward from Canada.