Another foot of snow on the way for NYC?

New York City, Philadelphia and other places from the mid-Atlantic to Northeast should stay on alert for snow.

New York City and areas of northern New Jersey became an epicenter for heavy snowfall in February, and that pattern doesn’t appear like it will break any time soon as the displaced polar vortex will keep sending bitterly cold Arctic air southward across the United States. A stormy corridor will set up across the Midwest and Northeast this week and beyond, creating more opportunities for snow from Chicago to the Big Apple, forecasters warn.

"Never, ever, ever trust a split flow,” Rayno said, pointing to a strong northern jet stream and a weaker southern jet stream on the weather map. A system later this week will develop into a long-duration event and may involve multiple storms that affect the Midwest and Northeast.

"Our storm systems are not going to be strong,” he explained, but he added that they will be able to tap into a major temperature contrast setup across the country in order to produce heavy precipitation. 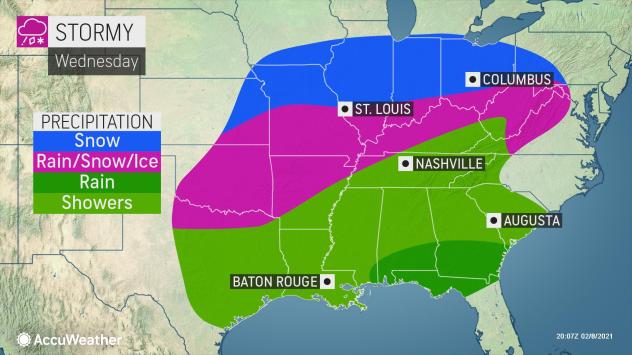 "High temperatures in Nebraska and Iowa will barely make it above 10 F this week. Meanwhile, it will be in the 70s and 80s along the Gulf Coast," explained AccuWeather Senior Meteorologist Dave Samuhel.

"This sharp temperature gradient is likely to trigger the development of this next storm later this week," added Samuhel, noting that the weather system will pose a host of threats including snow for points farther north, like through a swath of the nation that includes Chicago, Pittsburgh and New York City, along with the potential for snow and ice to the south.

Farther to the south, thunderstorms and rain will stretch across the southern and southeastern U.S., from east Texas though parts of Georgia and northern Florida. 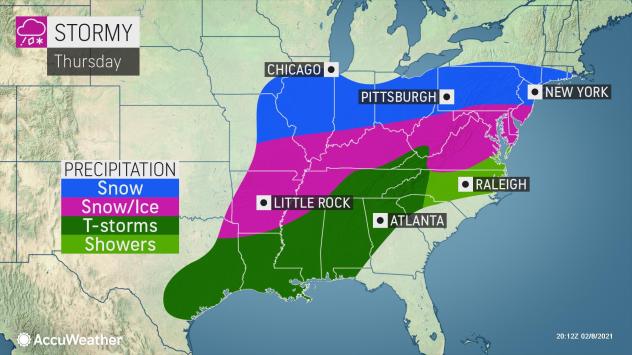 Periods of snow and ice will continue to push into the mid-Atlantic Wednesday night and engulf much of the Northeast by the end of the day on Thursday.

"By Friday, the center of the storm may be off the Atlantic coast, allowing for locally heavy snow across New England, and perhaps even parts of the mid-Atlantic," Samuhel said.

Unlike a storm early in the week, which is expected to be quick-moving, this storm could be a longer-duration event, allowing areas of snow and ice to build up over more than 24 hours. 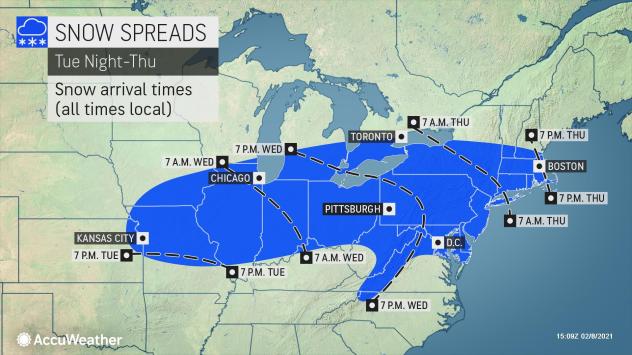 Another 6-12 inches of snow could be in store for some part of the Northeast with AccuWeather Local StormMax™ of 24 inches anticipated.

“We could be looking at accumulating snow along the I-95 corridor. D.C. didn’t get much from Sunday's storm. You may get an inch or 2 from this one — and the heaviest may be around New York City and Philadelphia," Rayno said.

AccuWeather is calling for Philadelphia and New York City to be right on the line between a 6- to 12-inch storm and a 3- to 6-inch storm. Farther inland, Pittsburgh is predicted to pick up another 3 to 6 inches of snow. 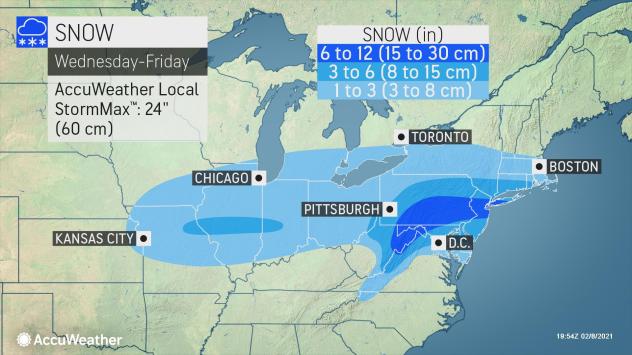 With the 4.5 inches recorded in Central Park on Sunday, the city has now picked up 32.5 inches this season. Sunday's snowfall pushed the total above the seasonal average for New York City, which is 28.5 inches. Also, as of Sunday, the Big Apple had already picked up more than two times the normal snowfall during the entire month of February. This season's total is nearly 28 inches more than last season's total in which New York City officially recorded just 4.8 inches.

The storm may end up being a double-barreled system and two surges of precipitation could occur.

“This is a very complex storm setup with the combination of Arctic air and moisture as well as the two waves of low pressure involved,” AccuWeather Senior Meteorologist Alex Sosnowski said.

“In some locations, it may snow at varying intensity for two days with the potential for 1-2 feet of snow and locally higher amounts where the perfect blend of Arctic air and moisture occur. The challenge at this stage is to figure out exactly where that west to east band of heaviest snow occurs and that may not be totally clear until the storm is already underway,” Sosnowski added. 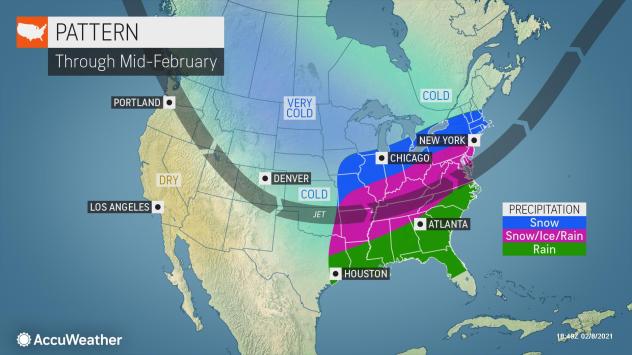 Air travel in major cities like Chicago, St. Louis, D.C., Philadelphia and Boston could all be impacted. Major interstates such as 40, 64, 70, 80 could have several days of dangerous road conditions. COVID-19 vaccine distribution could also be impacted.

"Travel could be significantly impacted from this storm, and for more than one day," said AccuWeather Vice President of Forecasting and Graphic Operations Marshall Moss.

A significant swath of ice is also forecast with the storm, especially from southern Missouri and northern Arkansas to parts of Virginia, West Virginia and western Maryland.

"Ice may accrue to a thickness of 0.25 of an inch or greater in this swath, which is enough to break tree limbs and lead to power outages," Sosnowski said. Locally higher amounts of more than 0.25 inch of ice could accumulate in the Ohio Valley. 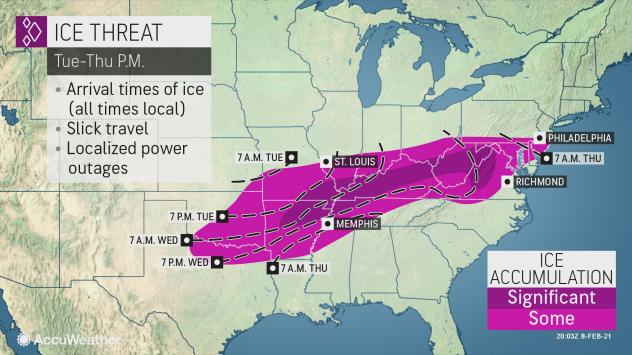 Should more of the ice occur as sleet as opposed to freezing rain, a lower risk of power outages may result as sleet does not cling to elevated surfaces.

It is possible that this impactful storm might not be the last in this train of wintry weather so far in February. AccuWeather meteorologists are monitoring the potential for another storm that could bring another dose of ice and snow in time for Presidents Day.