La Niña is expected to affect winter weather in Canada for the third straight year. AccuWeather meteorologists break down which areas will have a snowier winter and which residents could save on heating costs this season. 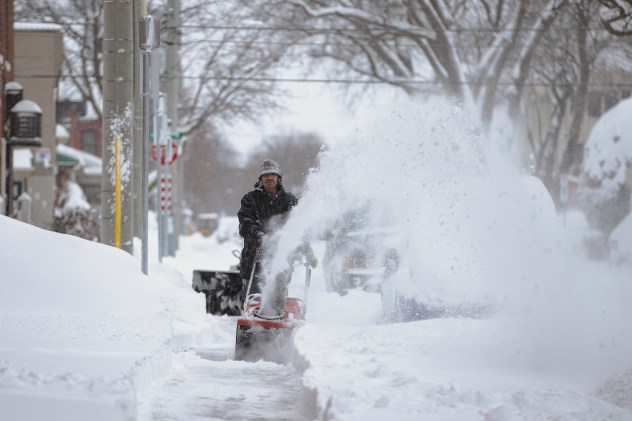 A man uses a snow blower during a snowstorm, in Hamilton, Ontario, Canada, January 17, 2022. REUTERS/Carlos Osorio

Winters in Canada are typically cold and snowy in many regions, but due to the orientation of the jet stream and the climatological phenomenon known as La Niña, some areas will bear the brunt of stormy weather while people in other areas could experience a break on their heating bill.

Longtime AccuWeather Senior Meteorologist Brett Anderson, who has spent decades forecasting the weather in Canada, has put together AccuWeather's annual winter forecast for the country, detailing what Canadians can expect for the upcoming season.

For the third year in a row, the climatological phenomenon known as La Niña will be present. According to Anderson, it is sure to play a vital role in the overall weather pattern this coming winter.

During a La Niña phase, sea surface temperatures in the open waters of the equatorial Pacific Ocean dip to below-average levels. In an update from mid-October, the National Oceanic and Atmospheric Administration (NOAA) said that the La Niña phase was "still in charge" in the Pacific Ocean and there is a "75% chance La Niña will be present this winter."

When La Niña is present, an amplified polar jet stream ushers in cold air and more frequent storms to the western half of Canada. While La Niña will be the primary driver of the winter pattern across much of North America, Anderson warns that a slight shift in the wind direction could enhance or counter its impacts. 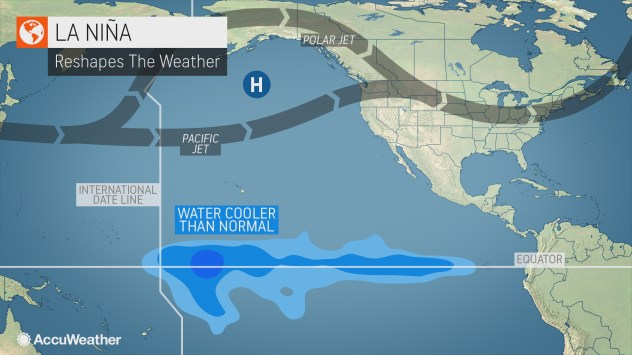 "However, the latest information suggests that the steering winds will be coming from more a west-northwest and northwest direction this winter," Anderson said. "Thus, we are leaning toward a winter with near-normal temperatures and snow [and] rain for much of central and southern British Columbia."

The heaviest snowfall, compared to normal, will cut across the northern part of British Columbia and southeast through the Canadian Rockies. For skiers and snowboarders, this winter's setup will not disappoint, according to Anderson. He said this pattern will favor an "excellent" season for most of the ski country.

Temperatures to plummet across the Prairies

While a cold winter is in the cards for western and central parts of the Canadian Prairies, farther east, temperatures will remain near normal during the winter season.

Unlike last year, when the polar vortex fueled extreme blasts of bitterly cold air across the southern Prairies, the orientation of the jet stream will be responsible for ushering in Arctic air masses, which will send temperatures plummeting across Alberta and Saskatchewan.

In Calgary, Alberta, the average high temperature during meteorological winter, which runs from December through February, is 1 degree Celsius (33.8 degrees Fahrenheit), according to Anderson. Residents there can expect temperatures to be lower than average this winter. 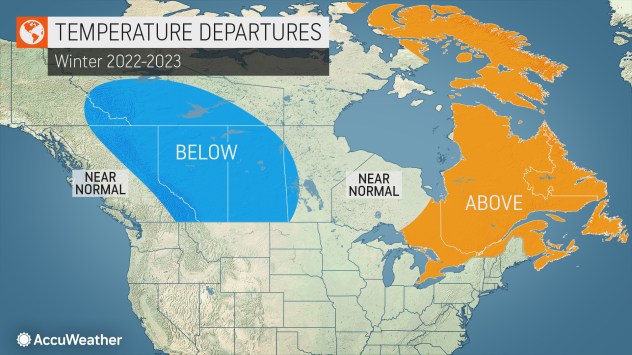 Although frequent Arctic air masses may cause heating bills to climb, they could spell good news for winter sports enthusiasts, such as outdoor hockey players or ice fishers, in need of solid ice conditions.

According to Anderson, fans of the snow in heavily populated areas across western and southern Alberta, such as Calgary and Edmonton, can thank a meteorological phenomenon known as upslope flow, or upsloping, for an expected above-average snowfall season.

Upslope flow occurs when air that is flowing toward higher terrain -- such as a mountain range -- and is forced to rise. When the air is forced upward over the higher terrain, it cools and condenses, increasing the intensity of the precipitation, whether it is rain or snow.

Calgary can expect more snow than normal this winter season. According to Anderson, the city measures 128 centimeters (50.40 inches) of snow during an average winter.

"Farther east in the lower elevations of the Prairies, where there will not be any upslope enhancement, the winter will tend to be drier compared to normal," Anderson said, explaining that cold, Arctic air does not hold much in terms of moisture. 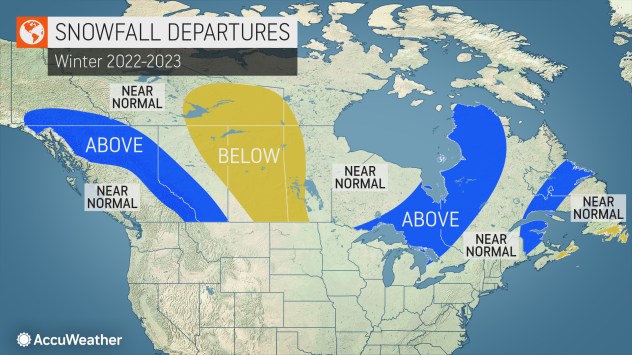 Temperatures in Manitoba are expected to be near normal, but one thing residents in the lower elevations should be prepared for is the wind. Anderson noted that this winter may be "windier than average," which could lead to episodes of dangerously low AccuWeather RealFeel® Temperatures.

The AccuWeather RealFeel® Temperature is made up of seven different weather variables to determine how the outside temperature is perceived by the average person. In the winter especially, these factors are something to consider when deciding how to bundle up.

Eastern Canada could save some money on heating bills this winter

Anderson says residents in much of the eastern half of Canada who are big fans of milder temperatures are in luck this winter.

Due to the orientation of the jet stream, the coldest air will stay well to the northwest of some of the country's most populated and visited cities, like Toronto, Montreal and Ottawa. The lack of persistent cold and an increase in relative humidity will help residents in eastern Canada save a few dollars on heating costs, but it will also limit the number of days resorts can make artificial snow.

A man uses a snow blower during a snowstorm, in Hamilton, Ontario, Canada, January 17, 2022. REUTERS/Carlos Osorio

That doesn't mean people should cancel their winter ski trips, as Anderson noted, more snow days than normal are predicted for the upper Great Lakes and northern Quebec this winter. He expects "near- to above-normal" natural snow conditions for the ski country in eastern Canada.

Away from the mountains, some of Canada's biggest cities can expect less snow than average. In Toronto, which averages 122 centimeters (48.03 inches) of snowfall per winter season, Anderson cautions less snowfall is likely.

In Montreal, which averages 210 centimeters (82.68 inches) of snow per winter, Anderson says residents could see more mixed precipitation-type of storms due to the episodes of mild air that will persist throughout the winter.

Residents are still trying to pick up the pieces after Fiona brought life-threatening flooding and hurricane-force winds to the Atlantic Canada coast less than a month ago. Fortunately, due to higher-than-average water temperatures, winter will start off more mild than normal, giving residents plenty of time to get everything in order before winter settles in.

The combination of higher-than-normal Atlantic water temperatures and the jet stream orientation will set the stage for a warmer and cloudier than normal first half of winter throughout Atlantic Canada.

In terms of the possibility of coastal storms and nor'easters, Anderson warned that residents of Atlantic Canada should keep their guard up through the second half of winter when the weather is expected to turn stormy.

Storms will feed off the warmer-than-normal Atlantic waters and rapidly strengthen before making landfall, Anderson explained.

Anderson cautions that most of these storms will track inland across the region, bringing heavy snowfall events from interior New Brunswick to Labrador. At the same time, the warming influence of the Atlantic may lead to more rain than snow along the coast.

Bike rider in silent film from 1897 never saw it coming