Whopping 18 inches of hail accumulates in parts of Michigan

A powerful thunderstorm dumped dime- to ping-pong-ball-sized hail across parts of Kalamazoo County, Michigan, on Aug. 14. AccuWeather reporter Blake Naftel was on the ground there and sent back images of large hail accumulations and damage crops sustained from the extreme hail.

After record-breaking hailstones fell from the skies over Colorado earlier this week, a powerful thunderstorm unleashed significant amounts of hail in Michigan on Wednesday. In this case, it was the accumulation of hail, not the mass of individual stones, that captured onlookers' attention.

In some places, as much as 18 inches of hail accumulated.

Large piles of ice may be one of the last things people might expect to see on the ground in mid-August. But this is exactly what some residents across southern portions of Kalamazoo County, Michigan, found outside their homes on Wednesday.

A severe thunderstorm dumped dime- to ping-pong-ball-sized hail across southern portions of Kalamazoo County, Michigan, on Aug. 14. The slow speed at which the storm moved through the area -- just 15 mph -- is what caused the unusually large hail accumulation.

AccuWeather Reporter Blake Naftel was on the ground in the region. He was able to capture the hail accumulation that remained on the ground in Vicksburg, Michigan, Wednesday afternoon into the early evening. Drifts measured nearly 18 inches in some spots, Naftel reported.

“We were working at the high school in the concession stands. It started to rain and then that rain quickly turned to what appeared to be a snowstorm of ice,” Josh Baird told AccuWeather of the hail that fell in Vicksburg, Michigan, on Wednesday.

Baird marveled as he stood in front of what appeared to be large piles of snow on the ground.

“It looked like popcorn just bouncing off of the ground,” Baird added. 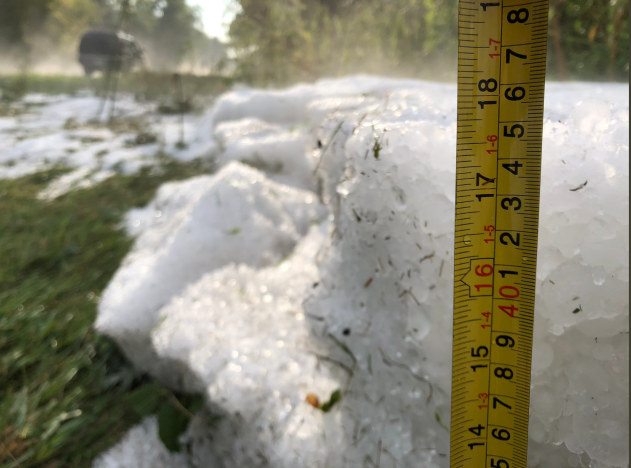 Naftel reports that several soy and corn crops were damaged by the onslaught of hail.

Severe storms moved over the state on Wednesday, and it appears that the piles of hail resulted from a "one-off thunderstorm that got particularly feisty," AccuWeather Meteorologist Jake Sojda said.

This storm brought mainly pea- and marble-sized hail, which does not meet the criteria for severe hail--hail that is 1 inch or greater.

"It was the amount of hail that fell that made it so noteworthy. However, if we are looking for accumulating hail like that, it typically is smaller hail that is falling," Sojda said.

This recent storm brought not only hail, but also heavy downpours and wind gusts up to 60 mph.

Even if a more significant threat of severe thunderstorms is not anticipated, any thunderstorm can grow strong quickly if localized conditions are adequate. Ideal conditions helped brew the storm that formed south of Kalamazoo.

Around the Great Lakes, lake breeze boundaries can also aid in the formation of thunderstorms, as well as help to make an otherwise ordinary thunderstorm stronger. This effect likely played a role in the severity of the recent storm that hit the south side of Kalamazoo.

"Typically, the larger the hail, the more intense the storm is. This is because the larger the hailstone, the faster the air needs to be rising into the storm to keep it high up in the cloud where it can keep growing. When you have enough energy to get the air rising fast enough to make large hail, you almost always have strong winds at the surface as well and sometimes can form tornadoes," Sojda explained.

Tornadoes tend to be fickle, and just because a storm strong enough to produce giant hail, this doesn’t guarantee that a tornado is also coming.

When large hail falls, it is recommended to hide inside a well-constructed building. Severe hail will, at the very least, can be painful to be hit by, as it can be traveling at more 100 mph before it hits the ground.

"Any strikes to the head can cause more serious injuries or even death, with the likelihood of serious injury or death increasing with the size of the hail, although typically for it to be deadly one would have to be hit in the head. Most other areas on the body will get a nasty bruise, but it always depends from case to case," Sojda said.

Not only is large hail a potential human threat, it can also have a large economic impact, especially on vehicles. Severe hail can dent cars and break windows, especially if it is accompanied by strong winds.

"Hail can also damage crops, although luckily it’s usually pretty localized, so while it may ruin some fields, it usually won’t ruin an entire crop," Sojda said. "Hail damage costs insurance companies billions of dollars in claims every year." Indeed, the images sent back from Michigan by Naftel showed broken soy and corn plants that were beaten to the ground.

Record-breaking hailstone in Colorado: ‘Big hail like this can easily kill people’ More severe storms to rock the central US with big hail, wind, tornadoes through Friday Preparing for severe weather: How to protect your car from thousands of dollars in hail damage
Report a Typo