Where might thunderstorms steal the fireworks show on the 4th of July?

As millions of Americans gear up for picnics, a day at the beach and fireworks viewings, there will be some trouble spots in terms of thunderstorm activity as there often are on Independence Day.

The most active zones for thunderstorms will generally be along the northern tier and from parts of the southern Plains to the central and southern Appalachians, and a portion of the Eastern seaboard on July Fourth. 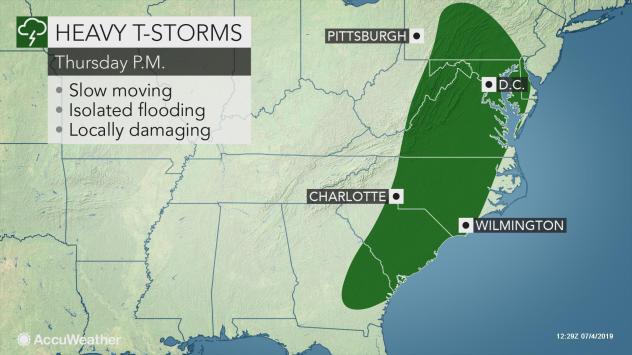 Most of the storms will occur between 1 p.m. and 9 p.m. and may only last about an hour. However, there are always some exceptions during the summertime.

Storms are likely from northern and central Idaho eastward to Pennsylvania and parts of New Jersey, New York state, Delaware, Maryland, Virginia, the Carolinas and Georgia. 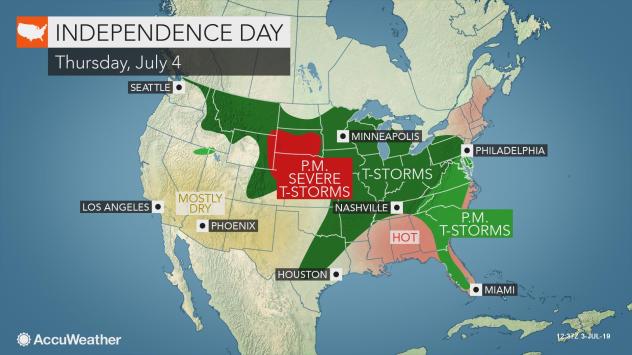 Along this swath, some of the thunderstorms may organize into large complexes that can last for 12 hours or more as they can travel for hundreds of miles. At any given location hit by one of these thunderstorm clusters, a few hours of heavy rain and brief, strong wind gusts can occur.

One thing to keep in mind is that even a garden-variety, pop-up thunderstorm can be very heavy for a short time over a localized area this time of the year. Storms of this nature can bring flash flooding, knock over trees and trigger power outages in one part of a community and completely miss another part.

While most thunderstorms will tend to finish up by 9 p.m. local time, light winds and high humidity in the wake of recent downpours can cause fog to form as soon as some fireworks displays begin or smoke dispersal may be so slow that the colorful shell bursts are obscured.

The best bets for rain-free weather on a regional basis include New England, the Deep South and much of the West. 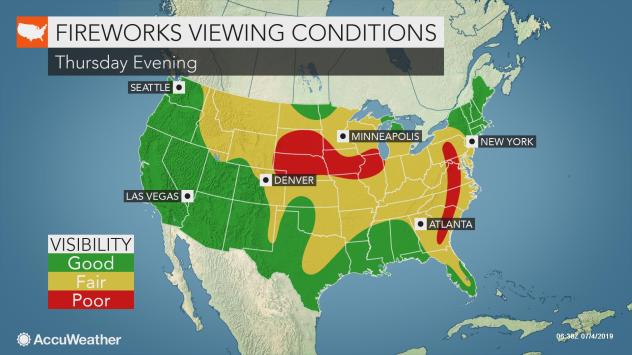 Major fireworks displays in Boston and New York City should not be interrupted by thunderstorms or downpours.

However, there is a chance of storms pestering Chicago, Philadelphia and Washington, D.C., to name a few.

What we can learn from 13 years of lightning fatalities
What you should do if you get stuck driving in floodwaters
Firework safety: How to prevent injuries and potential fire hazards
4 summer beach hazards that can seriously harm or kill you
The science behind fireworks: ‘Chemistry in action’

For those using personal fireworks, be aware of permanent and weather-related local ordinances. Dry conditions in the Southeast and parts of the West can cause sparks to rapidly ignite a blaze.

Highs over much of the nation will be in the 80s to lower 90s F. The cool spots will be along the immediate West Coast and over the high country of the Rockies and Sierra Nevada, where peak temperatures will be mainly in the 60s and 70s.

But remember, it does not have to be hot to get a nasty sunburn.

AccuWeather RealFeel® Temperatures will reach dangerous levels from the late morning to the early evening hours from the middle and lower Mississippi Valley to South Texas and eastward to the mid-Atlantic and southern Atlantic coast.

Heat will also be dangerous in the Desert Southwest as it often is during the summer. With low humidity in the desert areas, perspiration evaporates quickly and may not be noticeable. Hence, the need to stay hydrated. 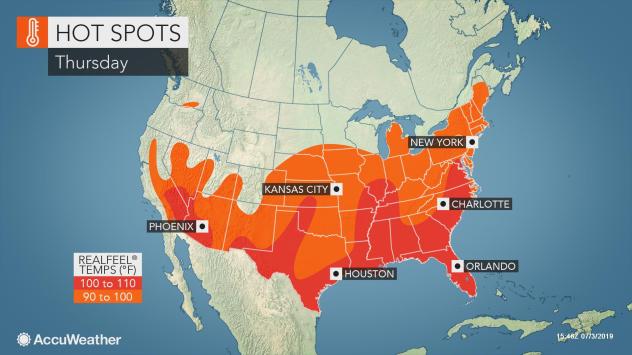 In New England, an area of high pressure is likely to hang on long enough to keep thunderstorms penned up to the west until late at night or on Friday.

Farther south, areas from Georgia to southeastern Virginia stand a good chance of remaining free of rain into the evening hours on July Fourth. However, very hot and humid weather needs to be considered as a safety concern with highs well into the 90s. At the very least, ice cream will melt fast.

Most areas from the southern High Plains, westward to California and northward to the western parts of Oregon and Washington are likely to be free of rain and generally clear. However, along the immediate Pacific coast, morning low clouds that burn off during the midday hours are likely to slowly return during the evening.

For those planning on taking a dip, remember that stream, lake and ocean water temperatures are still low enough in northern areas and in the higher elevations to create a safety concern from cold water shock. Water flowing from melting snow in the high country of the West is frigid.

Rip currents tend to shift and fluctuate due to the tide, local weather conditions and the shape of the beach. Heed all warnings from lifeguards and obey local beach advisories.

Download the free AccuWeather app to check on the latest forecast for your outdoor plans and to stay aware of any severe weather watches and warnings. Keep checking back for updates on AccuWeather.com and stay tuned to the AccuWeather Network on DirecTV, Frontier and Verizon Fios.