'We were incredibly fortunate:' No fatalities reported in Dallas after twister leaves trail of destruction

A large tornado touched down in the northern part of Dallas late Sunday evening, knocking out power to over 150,000 residents and causing significant damage to homes, cars, businesses and schools.

Around 10:30 p.m. CDT Sunday, the National Weather Service (NWS) in Fort Worth confirmed, via visual evidence, that a tornado was on the ground north of Interstate 635 and east of U.S. Highway 75.

The NWS has given this tornado a rating of EF3 with winds of 140 mph following damage surveys on Monday. A total of 3 tornadoes and one damaging downburst have been surveyed in Texas, an EF3, EF1, EF0. 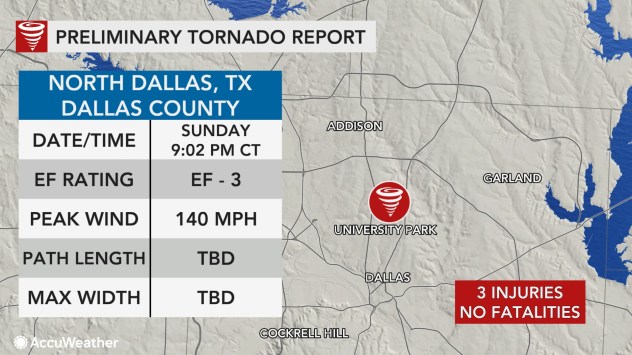 As of 7 p.m. CDT Monday, the city's website reported that three people have been hospitalized with non-life threatening injuries attributed to the storm. The Dallas Police Department and Dallas Fire Department will resume assessments of damaged structures at 9 a.m. CDT Tuesday, and 13 city facilities sustained damage as a result of the storm.

On Monday afternoon, Texas Gov. Greg Abbott issued a disaster declaration for 16 counties due to the severe storms. This declaration makes state resources available to areas impacted by the damaging storms.

However, there were numerous reports of downed trees and power lines, as well as debris covering area roadways. A gas leak was also reported in the Walnut Hill area of the city.

According to Newsweek, a spokesman for power company Oncor reported the 150,000 residents were left without power. As of 7:30 a.m. CDT Tuesday, nearly 28,000 remained without power in Dallas County.

"We were incredibly fortunate, considering the path of the storm, that we have no reported fatalities or serious injuries at this time," Dallas Mayor Eric Johnson said at a Monday press conference.

"Some of the property damage is significant, and we are still assessing it. Power is still out for tens of thousands and some traffic signals are down. I will visit some of the damaged areas today," he said, adding that Dallas is a "strong and resilient city."

A vigorous storm system running into warm, moist and unstable air across the southern Plains was the culprit behind the explosive thunderstorm development and will be responsible for severe weather farther east on Monday.

The tornado struck near Dallas Love Field Airport, but airport spokesman Chris Perry told the Associated Press that the airport wasn't damaged in the storm.

Many area school campuses sustained significant damage from the storm, forcing several school closures on Monday because of cleanup and recovery efforts. The Dallas Independent School District reported on Twitter that six campuses "sustained extensive damage" and, as a result, classes would be cancelled on Monday.

At 2 a.m. CDT Monday, the city opened the Bachman Recreation Center for those seeking shelter or refuge from widespread power outages and structural damage caused by the tornado.

Johnson said libraries were also being used as shelters for people that needed a place to go.

NBC News reported that a flooring store collapsed near Harry Hines Boulevard and that damage occurred to the front of a shopping center near Marsh and Walnut Hill Lane.

The network also reported that roofs had been damaged on homes near Richland College and that windows had been blown out of a store near I-635.

In addition to the tornado that hit Dallas, other communities were also ravaged by damaging winds and large hail following Sunday night's storms. 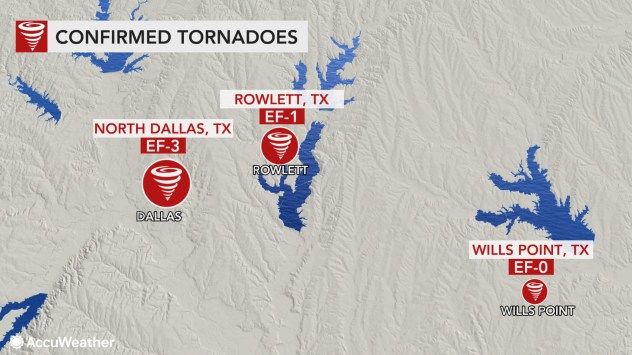 In northeastern Arkansas, an EF1 tornado injured at least five people in Tyronza. One person was killed in Benton County, Arkansas, after 80 mph winds tossed a tree onto a home near the community of Beaver Lake early Monday, ABC News reported.

Authorities said severe thunderstorms were responsible for the deaths of at least three people in Oklahoma.

According to the AP, Oklahoma State Bureau of Investigation spokeswoman Brooke Arbeitman said two teenage boys died of carbon monoxide poisoning when they were using a generator after their power went out late Sunday in Weleetka, about 80 miles east of Oklahoma City.

At least two tornadoes were confirmed in southeast Oklahoma Sunday evening in Pontotoc and Seminole counties. Both were given an EF1 rating and no injuries were reported.

A preliminary EF1 tornado developed in Highlandville, Missouri, and tracked northeast to just north of Sparta. The tornado tracked 11.98 miles with max winds of 90 mph. Dozens of trees were broken or uprooted along the path. A preliminary EF0 tornado hit Republic, Missouri, knocking out power lines and damaging a home.

An EF1 tornado hit Memphis, Tennessee, and caused damage to apartment buildings and trees around the Cottonwood Apartment area.

As the storms ripped through the area, passengers on planes waiting to depart from Memphis International Airport had to be evacuated and were being told to go through security clearance a second time.

More flame-fanning Santa Ana winds on the way for California

Wintry storm to sweep southern US early next week