June 23 (UPI) -- Ancient ice cores suggest a giant volcanic eruption in what's now Alaska set off a series of climatic shocks that sowed economic disruption and political upheaval across the Mediterranean during the middle of the 1st century B.C.

In the wake of the assassination of Julius Caesar in 44 B.C., Rome's power brokers jockeyed for control as the Roman Republic disintegrated and the Roman Empire emerged. Several hundred miles to the Southeast, Cleopatra's attempt to restore Egypt to its former glory was complicated by failed floods, famine and disease.

To better understand how ancient climate change influenced the trajectory of this turbulent period of history, researchers analyzed paleoclimatic, archaeological and historical records.

When scientists compared their climatic data to historical records, they found evidence that the climatic shocks triggered by the Alaskan eruption reverberated across the Mediterranean. The research team shared their findings this week in the journal PNAS. 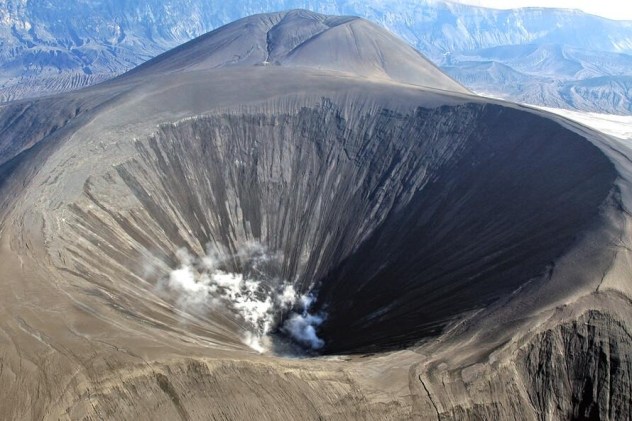 When Alaska’s Okmok volcano erupted a little more than 2,000 years ago, the event triggered climatic shocks that caused economic and political instability across the Mediterranean, according to a new study. (Christina Neal/Alaska Volcano Observatory/USGS)

Ice cores extracted from the Arctic revealed the remnants of one of the largest volcanic eruptions during the 2,500 years. Scientists dated the volcanic rocks to the year 43 B.C. and traced the ejected particles to the Okmok volcano in Alaska.

Paleoclimate records showed the year 43 and 42 B.C. were two of the coldest years in the Northern Hemisphere -- and the beginning of a decade-long cold spell.

"We know that the Nile River did not flood in 43 B.C.E. and 42 B.C.E. -- and now we know why," Joe Manning, professor of classics and history at Yale University, said in a news release. "This volcanic eruption greatly affected the Nile watershed."

In one written source, penned in 39 B.C., an Egyptian historian describes the large-scale famine and social unrest that plagued the empire during the previous decade.

"This inscription does not describe collapse or resilience," Manning said. "It is a more complicated story of trying to survive and to figure out how to distribute grain during a very chaotic time."

Historical records from Rome suggest the entirety of the Mediterranean experienced the ill effects of the climatic shocks caused by the massive eruption on the island of Okmok.

"While it is difficult to establish direct causal linkages to thinly documented historical events, the wet and very cold conditions from this massive eruption on the opposite side of Earth probably resulted in crop failures, famine, and disease, exacerbating social unrest and contributing to political realignments throughout the Mediterranean region at this critical juncture of Western civilization," researchers wrote in their new paper.