Several countries in Europe basked under a very sunny month of May this year, with some even experiencing a sunny spring that broke new records.

In the first half of a grim year dimmed by the coronavirus pandemic, numerous countries in Europe received a sliver of sunshine. A record-breaking sliver, that is.

In each country's recorded history, no year in the United Kingdom or in Germany saw a sunnier spring than what occurred in 2020. In the U.K., Wales, Britain, Scotland and Northern Ireland each set a new cumulative sunshine record for the season while England and Wales also set monthly records for sunshine hours in May.

According to The Met Office, the national meteorological service for the U.K., the nation totaled 695.5 hours of sunlight throughout the season, over 100 more hours than any other spring in recorded history, dating back to 1929.

In Germany, even more seasonal records fell as some areas of the country saw nearly 800 hours of sunlight this spring, according to data from Germany's National Meteorological Service, the Deutscher Wetterdienst (DWD). 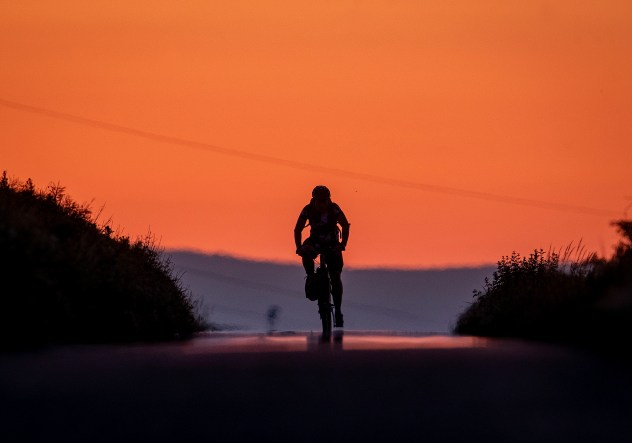 A man rides his bike on a small road in Frankfurt, Germany, before the sun rises on Tuesday, June 2, 2020. (AP Photo/Michael Probst)

In a press release, the DWD said that April registered as the sunniest and third-driest month since record-keeping began in 1881.

"April 2020 impressed with exceptional sunshine: the approximate 294 sunshine hours correspond to about 190 percent of the normal of 154 hours, slightly exceeding the previous record of 289 hours reached in April 2007," the national service said. "With about 325 hours, the most sunshine was recorded north of Munich, where total sunshine, when accumulated since 13 March, came close to about 500 hours."

In the month of May, England basked in the most sunshine hours with 299.4 hours, Wales saw 281.3 hours, Northern Ireland received 226.7 hours, and Scotland soaked up 212 hours. 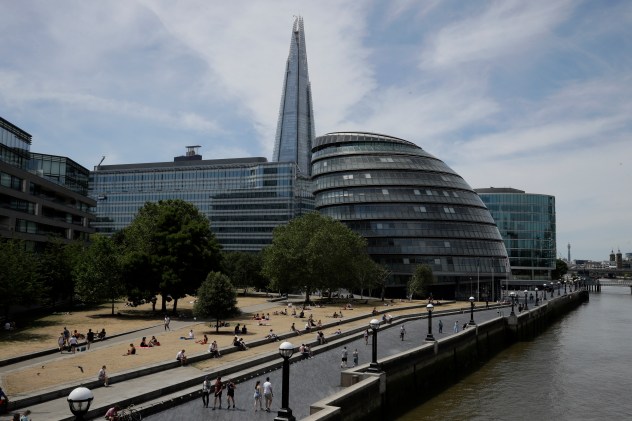 People relax in the sun backdropped by City Hall and the Shard skyscraper, the tallest building in Britain, at Potters Fields Park by the River Thames in London, Tuesday, June 2, 2020. As the coronavirus lockdown restrictions are eased by the government people are enjoying the hot weather in parks and beauty spots. The British Met Office said May 2020 has become the sunniest calendar month ever recorded for the U.K. and the driest May on record in England. (AP Photo/Matt Dunham)

"The most remarkable aspect is just how much some of the May and spring records for these climate statistics have been exceeded," Dr. Mark McCarthy, the head of the Met Office’s National Climate Information Centre, said according to metoffice.gov.uk. "Exceeding the U.K. sunshine record is one thing, but exceeding by over 70 hours is truly exceptional," he added. "The sunshine figures for spring would even be extremely unusual for summer and only three summers would beat spring 2020 for sunshine hours."

According to McCarthy, a main reason for all the sunny weather in the U.K. has been a period of high pressure that has decreased the development of clouds and rainfall.

Another theory, floated on Twitter by Seradata, a satellite database and data analysis company, connects the increase in sunny days to a decrease in air travel.

The UK Met Office "surprised" at sunniest May. We are not surprised & predicted that there would be a temporary warming. Less air travel means less condensation trails (contrails) and particulates, letting more sun through. Same thing happened after 911. https://t.co/kisqIqwG7s pic.twitter.com/tgFtmoOq8V

Whether contrails from airplanes have a direct or indirect impact on the amount of sunshine that reaches the surface in countries like the U.K. or Germany is debatable, previous studies suggest that the increased sunlight could have life-saving effects during the pandemic. According to a publication from professors at Trinity College Dublin in Ireland, insufficient sun exposure in countries located farther north has led to vitamin D deficiencies, which they say may be connected to higher COVID-19 mortality rates.

For both Ireland and Germany, which are similarly situated latitudinally between 47 and 55 degrees north of the equator, this spring's record-breaking sunlight could have provided the perfect catalyst needed for the natural creation of vitamin D.

However, while the extra sunlight may have boosted vitamin D levels and provided a few more sunny days to enjoy outside, the cost may have come with reduced rainfall totals. According to The Met Office, this spring was the fifth-driest ever in the U.K., and England saw its driest May ever. 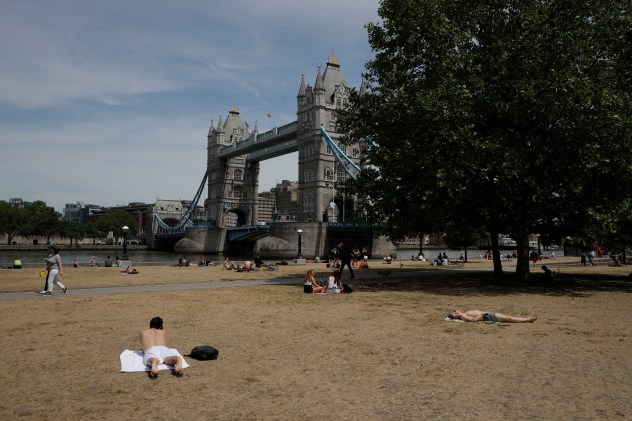 People relax in the sun backdropped by Tower Bridge, at Potters Fields Park by the River Thames in London, Tuesday, June 2, 2020. As the coronavirus lockdown restrictions are eased by the government people are enjoying the hot weather in parks and beauty spots. The British Met Office said May 2020 has become the sunniest calendar month ever recorded for the UK and the driest May on record in England. (AP Photo/Matt Dunham)

Harvey Bradshaw, the executive director for Environment and Business, Environment Agency, told The Met Office that the dryness has dealt a blow to river flows and reservoir levels.

“These are exceptional times and the record-breaking dry weather is a powerful reminder of what a precious, natural resource our water is," Water U.K. chief executive Christine McGourty said. "With so many people at home and enjoying their gardens, water companies are seeing record demand for water, which can cause issues with water pressure, she said. "We need to keep washing our hands, but make other small changes to our water use, for example cutting back on paddling pools and sprinklers, particularly at the peak times in the evening.”