Aerial images captured by international news agency AFP show a sea of FEMA water bottles, packaged into massive bundles, heaped in what appears to be a private estate in Dorado, 25 miles west of San Juan.

It has been more than five months since the last typhoon roamed the western Pacific Ocean; however, that streak may come to an end in early August.

Severe Tropical Storm Francisco is currently southeast of Japan and will track toward the country in the coming days while a tropical storm east of the Philippines is expected to strengthen significantly and track northward toward Japan after Francisco departs. 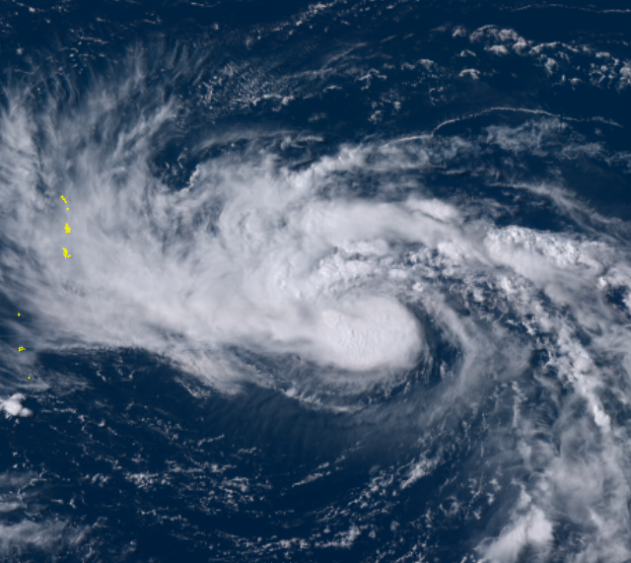 Francisco formed over the open waters of the West Pacific on Friday, in an area of warm waters northeast of the Philippines and southeast of Japan.

Francisco will move through an area that is quite conducive for tropical development with a combination of warm ocean water and light to moderate wind shear. These conditions may allow Francisco to reach typhoon strength by early this week. 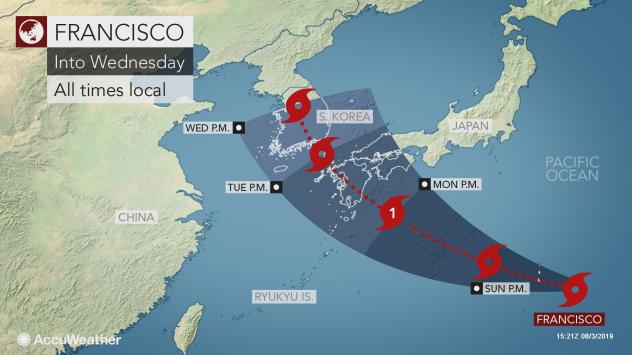 As Francisco tracks towards southern Japan, boating and shipping interests should be prepared for rougher seas and strong winds in the vicinity of the storm.

Impacts may begin across southern Japan as early as late Monday afternoon and continue into Tuesday as the storm tracks west to northwest across southern parts of the country.

Francisco will weaken due to interaction with Japan, but will continue to be a threat for locally damaging winds and flooding rainfall as it tracks over South Korea during the middle of the week. 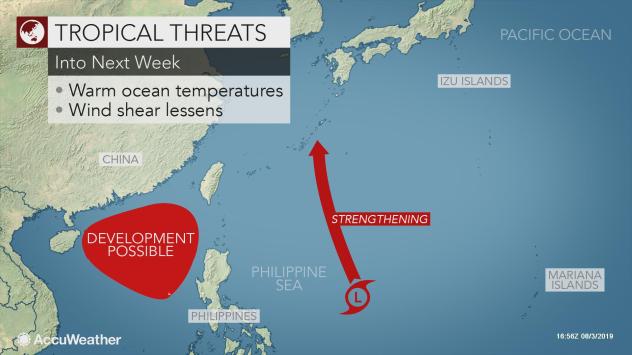 A tropical depression developed east of the Philippines on Sunday morning, local time, and strengthened to Tropical Storm Lekima later in the day. The storm is being called Hanna in the Philippines.

This storm could be another threat to Japan after Francisco departs.

This new tropical threat is expected to strengthen significantly as it moves generally northward in the coming days. Strengthening into a typhoon is expected and it remains a possibility that this storm could go through a period of rapid intensification and reach super typhoon status.

Impacts may begin in Japan's Ryukyu Islands as early as Thursday before advancing northward into mainland Japan from Friday into next weekend.

South Korea may also be impacted by this tropical system next weekend depending on the exact track of the storm.

Meanwhile, another tropical cyclone could brew on the heels of Wipha which developed in the South China Sea earlier this past week.

While Wipha continues to bring flooding rainfall to southern China and Vietnam through the weekend, the original development spot of Wipha could become home to a new tropical cyclone again this week.

The atmospheric and water conditions in place over the South China Sea as were there just a week ago, making it a breeding ground for more tropical systems.

It's possible that any system moving through this area could strengthen into a tropical storm or typhoon, depending on how long it remains over the open water.

Locations from Vietnam to southeast China and Taiwan should all monitor the potential for tropical development in the South China Sea this week.

Download the free AccuWeather App to get the latest updates on weather hazards in your area.