Tropical Depression Karen to change course over Atlantic next week

According to the USGS, the municipalities of Coamo, Orocovis and Bayaney received the most rainfall in the territory. Gauges in Coamo topped out at 5.00 inches.

Karen was downgraded to a tropical depression around 11 a.m. EDT Friday and it was located about 390 miles southeast of Bermuda.

The tropical storm is forecast to continue to pull away from the Caribbean into Friday, but its forward speed is forecast to decrease substantially by the end of the week as steering winds drop off.

The storm is then expected to stall roughly halfway between Puerto Rico and Bermuda before taking a left turn.

"We expect the steering flow to collapse and cause Karen to stall or loop from late this week to this weekend," Dan Kottlowski, AccuWeather's top hurricane expert, said. 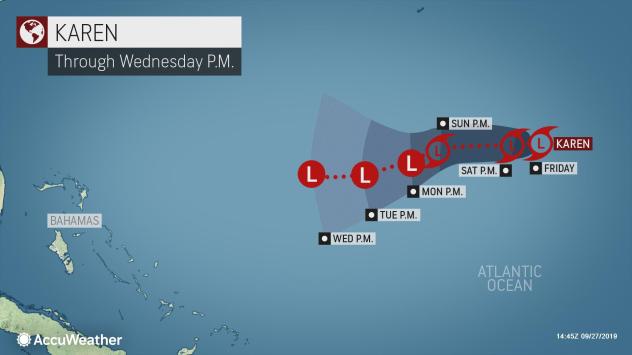 "Next, we expect high pressure to build north of Karen and cause the storm to begin a west to southwest drift later this weekend to early next week," Kottlowski said. This turn will bring Karen toward the Bahamas, Cuba or Florida next week.

Karen is likely to be a tropical storm as it changes course. While there is a chance it strengthens for a time and becomes a minimal hurricane this weekend, a repeat of the Dorian scenario, which lead to rapid strengthening to a Category 5 is highly unlikely.

Wind shear is likely to increase as Karen nears the Bahamas, Cuba and Florida, and that should be enough to cause Karen to weaken and perhaps even fall apart.

However, if wind shear ends up being less intense or shifts westward as the storm moves along, Karen could maintain strength. 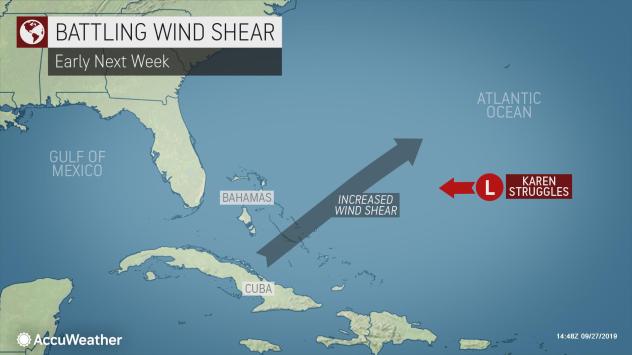 "All residents and interests in the Bahamas, Cuba and the southeastern United States should monitor the progress of Karen, especially during next week," Kottlowski said.

Depending on the track and intensity of Karen as it nears the Bahamas and other land areas in the region, there is the potential for locally heavy rain, gusty winds and rough seas and surf at the least.

The details will unfold in the coming days as to the severity of the situation as Karen's strength may range from a potent hurricane to a tropical rainstorm.