Tropical Storm Karen became the latest tropical system to lash the Caribbean this weekend, and its impacts are expected to reach Puerto Rico in the coming days as it crawls through the Caribbean Sea.

Karen is one of several tropical systems, along with Tropical Storm Jerry and Tropical Depression 13, twirling in the Atlantic that forecasters are keeping a close eye on. The system became a tropical storm on Sunday morning, local time, just in time to impact the Leeward and Windward islands.

On Sunday morning, flooding was being reported across Tobago in the Windward islands. Additional rainfall was forecast for the islands through the start of the week.

A hurricane hunter aircraft was investigating the storm early Monday, according to the National Hurricane Center. As of 8 a.m. Monday, Karen was located about 225 miles west-northwest of St. Vincent and had maximum sustained winds of 40 mph. 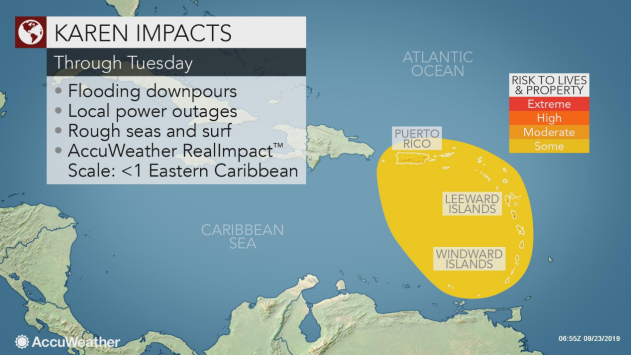 A tropical storm warning has been issued for Puerto Rico and the U.S. and British Virgin Islands.

Midday on Sunday, local time, the national security minister of Trinidad and Tobago held a press conference and announced there would be no national shutdown on Monday, despite Karen.

Citizens should remain vigilant and heed any warnings and alerts issued by the government.

Winds of this magnitude will be capable of bringing sporadic power outages across the islands into Monday.

Some power outages were reported across Tobago on Sunday morning. 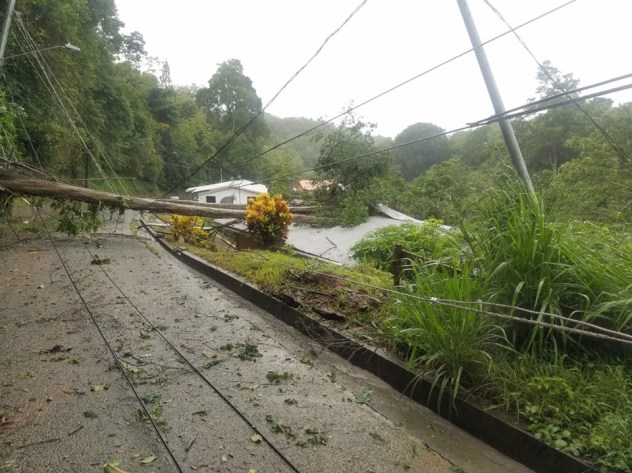 The above photo shows electric lines brought down by fallen trees across Tobago on Sunday morning. (Photo/Tobago Emergency Management Agency)

Coastal flooding and heavy downpours will also be a concern as Karen passes by. When combined, these impacts designate Karen as <1 on the AccuWeather RealImpact™ Scale for Hurricanes.

For Monday and much of Tuesday, Karen will move northwestward across the eastern Caribbean Sea. While the system will be far enough from the islands to prevent damaging winds, some tropically-enhanced rainfall, as well as rough seas and surf, will continue.

Such a track to the north is eerily similar to that which Dorian took earlier this year, when it passed through the eastern Caribbean at the end of August. 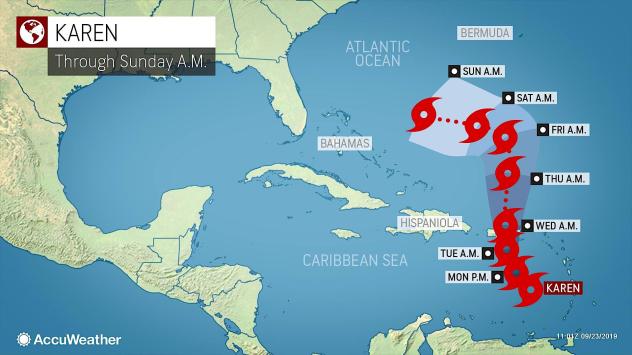 Karen will gradually intensify as it tracks toward Puerto Rico and the Virgin Islands early this week, according to Pydynowski, bringing an uptick in downpours and locally gusty winds as it approaches.

These conditions could persist through early Wednesday, until Karen moves out into the Atlantic, when it should be centered well east of the Bahamas.

"This will place Karen in a zone of warm waters and lessening wind shear by midweek, which could allow the cyclone to intensify," Pydynowski added.

For the latter half of the week, the pattern across the northern Atlantic Ocean and the United States is likely to influence Karen's track. Should the high over Bermuda strengthen, the cyclone may try to turn westward late in the week.

Because of this, interests across the Bahamas and the southeastern United States should be carefully monitoring the track of Karen this week.

In addition to watching Karen this week, AccuWeather meteorologists are also monitoring Tropical Depression 13 that formed off the west coast of Africa late Sunday evening. 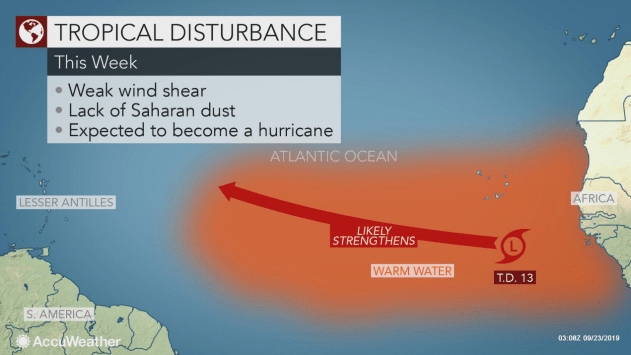 Tropical Depression 13 is forecast to become a tropical storm on Monday and a hurricane by midweek, according to Pydynowski.

When the system reaches tropical storm strength this week, it will be given the name Lorenzo. 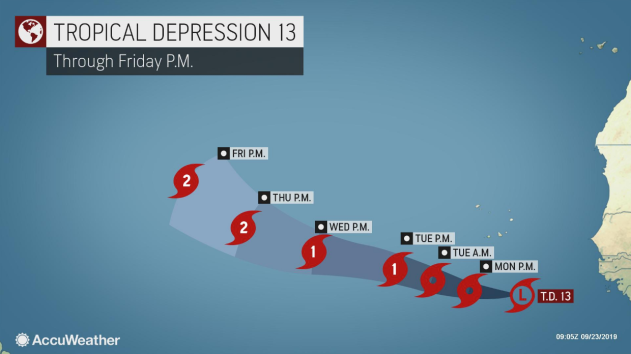 Through the middle to late week, the system will track mostly westward. While the most likely thinking is that it could be steered northward away from the land of the Western Hemisphere, interests along the Atlantic coast should still keep an eye on this system.

Download the free AccuWeather app to stay aware of the latest forecast for your area. Keep checking back for updates on AccuWeather.com and stay tuned to the AccuWeather Network on DirecTV, Frontier and Verizon Fios.