Through the lens of Irma: How shelters handle pets when their owners evacuate during a hurricane

As Hurricane Irma barreled toward Florida in September 2017, officials issued the largest mandatory evacuation in the United States. As people stuffed what belongings they could in their cars, waited in lengthy gas station lines and hoped for the best fate of their homes, many were also ensuring their pets would safely ride out the storm.

Some of the evacuees headed north, crossing through or stopping in Escambia County, a county in the panhandle of northwestern Florida. Temporary shelters housed not just the people running from the storm, but their pets as well. One woman brought around 14 dogs, the manager of Escambia County Animal Services recounts.

Florida law requires the state and local emergency management plans to include evacuation strategies for people with pets, and now that hurricane season has begun once again, animal shelters in Florida are reminding the public to prepare for potential storms.

The Humane Society of Greater Miami released a hurricane guide to help pet owners plan for hurricanes. It includes knowing of and registering for any pet-friendly shelters or hotels, gathering enough pet supplies and how to care for pets when weathering out a disaster.

How to ensure the safety of family pets during a hurricane Evacuation checklist: How to get your family out safely in the face of an imminent disaster Why you should evacuate ahead of a hurricane AccuWeather's interactive hurricane tracker

One of the options in finding refuge is a side-by-side shelter, or a shelter where both people and animals are housed, though in separated areas.

When Irma hit, Pensacola Bay Center in Escambia County acted as a temporary side-by-side shelter for the evacuees and their animals. The setup allowed for the pets and their owners to stay together despite being housed separately.

"The owners can come check on the dogs, and they actually help us with walking them, feeding them, all that kind of fun stuff. So they still have that bond and stay together," said John Robinson, the community manager for animal services and control in Escambia County. 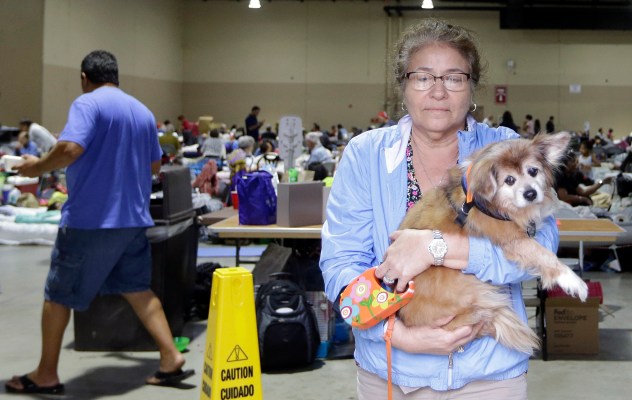 On Sept. 11, 2017, the indoor stadium of Pensacola Bay Center peaked in population. The center housed about 237 people and 53 pets, along with 88 horses at the Escambia County Equestrian Center about 25 minutes away from the main center. Two days earlier, it had only held around 45 people and 19 pets with 50 horses at the equestrian center, according to the Escambia County records.

"We transferred out a large number of animals before Irma came to make room in our shelter for post-storm activities," Brent Bardell, the managing director of operations for Society for the Prevention of Cruelty towards Animals Tampa Bay, wrote in an email to AccuWeather.

The shelters transfer adoptable animals to other shelters that are not as directly affected by the oncoming hurricane and have the space. This makes room for the pets of evacuees who may need a safe place to house their pet.

In the month of September, the same month of Irma, SPCA Tampa Bay had its highest number of animal transfers at 78. Among the transferred animals that month were 12 dogs, 60 cats and 6 unspecified animals. Bardell confirmed the majority of the animals were transported in preparation of the storm. The lowest amount of transfers the shelter has had was in January 2017 at 25 transfers.

The animal shelter predominantly takes in owner-surrendered pets to adopt out. But in the event of a storm, they will take in the pets owned by any residents of the community with special needs, said Bardell.

Even though Pinellas County wasn’t affected too much by Irma, a few people still brought their animals to the SPCA Tampa Bay shelters to be cared for while they evacuated.

During Irma, the pets at the SPCA Tampa Bay shelters and their owners were separated from each other from two days to two weeks.

“Really, it had to do with how quick we got power back, but every animal was reclaimed from their owners within, I think, a two- to three-week time period,” said Bardell.

The Escambia County Animal Shelter made room for the evacuees' pets as well through transferring adoptable pets to different locations. Though unlike Pinellas County, Escambia County worried that Irma might sweep across their community.

"We had worked out a deal with one of our partner societies. The Humane Society of Michigan came through and actually removed about 80 dogs from our facility," said Robinson.

When Irma bypassed Escambia County, the shelter prepared to take care of the animals of the Florida evacuees. They took in the animals that the side-by-side shelters were unable to house but kept in touch with the owner on the status of their pet. Most of the animals were reunited with their owners after a few days.

There are occasions where a few animals aren't reclaimed by their owners after the storm.

"There's always a handful that just never get redeemed," said Robinson. "The people just never come back to get them for whatever reason. That's always been a challenge for us as well. In any of these disaster responses, that's a problem that does come up."

The animals that aren't reclaimed are typically put up for adoption after an established hold period. Once that time period has expired, they may be transferred to a different organization to adopt them out.

Pet owners evacuating from hurricanes who abandon their pets don't always leave them in a shelter, however.

The Director of Animal Care Diane Suave spoke out against the acts, as animals were left in inescapable conditions such as being locked-in pens or tethered to poles or trees. The approach of hurricanes Harvey and Maria brought on a similar crisis for pets.

The SPCA Houston and SPCA Texas played a part in saving stray animals from Hurricane Harvey, transferring adoptable animals to other shelters and providing space for any incoming animals after the storm. Combined with the help of the Texas SPCA, they moved over 1,088 animals out of the hurricane's path, including strays and evacuees’ pets.

Animal services and control work tirelessly to ensure the safety of animals during disasters, Robinson added.

"It's exhausting, and it absorbs a lot of energy when it's over. It takes a lot out of you. But I think it's worth it in the long run," said Robinson.