Thanksgiving outlook: Brutal cold, snow to blast Midwest as a storm may eye the East

While warmth builds in the Southwest, re-surging cold air may trigger frequent snow in the Great Lakes and help spin up a storm along the East Coast around Thanksgiving Day.

Following a storm and shot of cold air that sweeps across the northern part of the nation into this weekend, there is the potential for very cold air with a punishing wind to take root over the Midwest and Northeast during the long Thanksgiving weekend.

"If indications are correct, some locations may be hit by up to one foot of snow, while gusty winds sweep cold air from the northern Plains to the Gulf Coast, Appalachians and eventually the Atlantic Seaboard," according to AccuWeather Senior Meteorologist Brett Anderson. 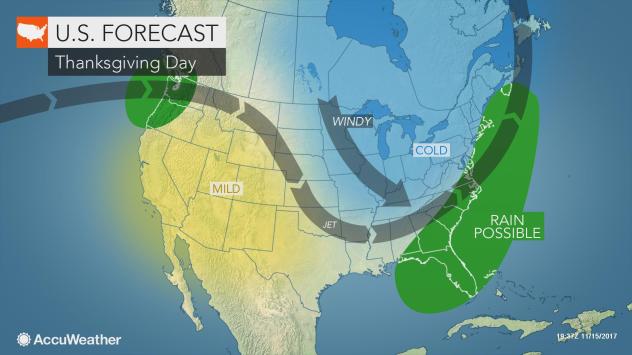 It is during that press of arctic air when another storm may come about with a swath of steady rain, ice and snow in the Northeast.

A piece of the Polar Vortex may break loose and settle in the swath from the Great Lakes to the Gulf of St. Lawrence.

The Polar Vortex is a semi-permanent pocket of cold air located near the highest levels of the atmosphere. Usually this core of cold air hangs out near the Arctic Circle and keeps frigid air contained, but the Polar Vortex does not simply vanish in the summer months.

"In summer, the Polar Vortex is relatively weak and far north but becomes larger and stronger in winter," AccuWeather Chief Meteorologist Elliot Abrams said. "It typically steers winds around the globe and consists of a central core surrounded by lobes that can greatly range in size, shape and orientation."

"[In the winter,] when one of these lobes, or pieces, of the vortex break off or is oriented such that winds high up in the atmosphere come from northwestern Canada to the Great Lakes or Northeast, it can be extremely cold in these areas," Abrams added.

At present, it appears it is less likely that the main portion of the Polar Vortex will approach the Great Lakes and Northeast, but rather small lobes will spin quickly by. This would suggest abbreviated blasts of cold air, rather than a long-lasting outbreak.

"The cold blasts with lake-effect snow from the Midwest to the central Appalachians are likely to last for a couple of days at at time through the Thanksgiving weekend," according to AccuWeather Long-Range Meteorologist Evan Duffey.

"In terms of an East Coast storm, we are not expecting a powerhouse event, but rather more of the nuisance variety," Duffey said.

That storm will carry the potential for light rain along the Interstate-95 corridor from Washington, D.C., to Philadelphia and New York City around Thanksgiving Day. The same storm may bring snow or perhaps a rain to snow situation for the Appalachians and some sort of wintry precipitation combination for New England.

There is a chance that a new wave of cold, dry air will already be on the move to the coastal Northeast by Thanksgiving Day. In this scenario, the storm will have been swept out to sea prior to Thanksgiving.

The details such as timing of the storm will become clear in the coming days.

In the South, areas from the Mississippi Valley on west are likely to be dry with the cold air already established. However, at least part of the southern Atlantic Seaboard may face rain, prior to the surge of dry, chilly air.

"In the West, most areas west of the Rockies, including California, Nevada and Arizona are likely to be dry, warm and sunny for much of the Thanksgiving holiday and the weekend that follows," Duffey said.

There may be an exception to the dry weather in parts of the West.

"Clouds and rounds of rain are likely to be swept ashore from the Pacific Ocean into part of the Northwest," Anderson said.

At this point it appears snow levels may be above most of the major passes in Washington, Oregon and Idaho for the four-day Thanksgiving weekend. High snow levels in this area should give those hitting the roads in the region peace of mind.

AccuWeather will continue to provide updates on the weather for Thanksgiving Day, as well as conditions expected for travel prior to and after the holiday.

In the meantime, winter is targeting areas of the Midwest and interior Northeast for an early start. Now is the time to make sure you, your vehicle and home are set up to handle the inevitable in the days and weeks ahead. Have shovels, ice melting compounds and warm outerwear on hand.